1844 Black Map of Palestine, Israel or the Holy Land 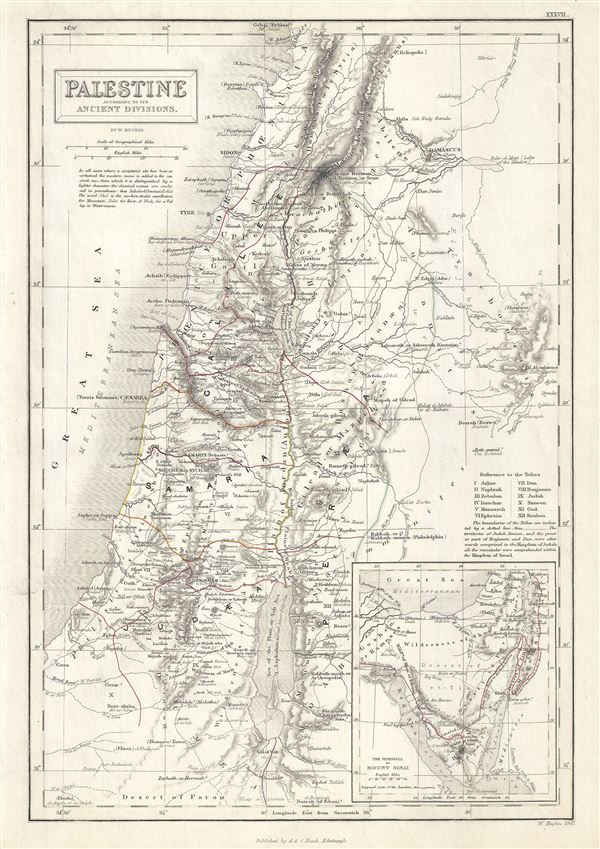 1844 Black Map of Palestine, Israel or the Holy Land

This is a scarce 1844 Adam and Charles Black map of Ancient Palestine, Israel or the Holy Land. It covers the region as it existed in Biblical times with divisions for each of the Twelve Tribes of Israel and includes the modern day nations of Israel, Palestine and Lebanon, as well as parts of adjacent Syria and Jordan. Various cities, towns, rivers, mountains and several other topographical details are noted with relief shown by hachure. This map marks both ancient and contemporary place names as well as the locations of Biblical events and ruined cities. The color coded outlines detail the region as it may have appeared in Biblical times, with the lands claimed by the various Tribes of Israel noted.

An inset map in the lower right quadrant details the Peninsula of Mount Sinai, where the cartographer notes, Mount Sinai, Mount Horeb, the ancient mountains of the Nile, and the Islamic Haj route. It shows the course of the Israelites as they fled out of Egypt, across the Red Sea, and subsequently spent the next forty years wandering in the Sinai before migrating into the Promised Land by crossing the Jordan River just north of the Dead Sea. The names of the Twelve Tribes are listed along the right margin. This map was engraved by William Hughes and issued as plate no. XXXVII in the 1844 edition of Black's General Atlas.