1832 Burr Map of Palestine, Israel or the Holy Land 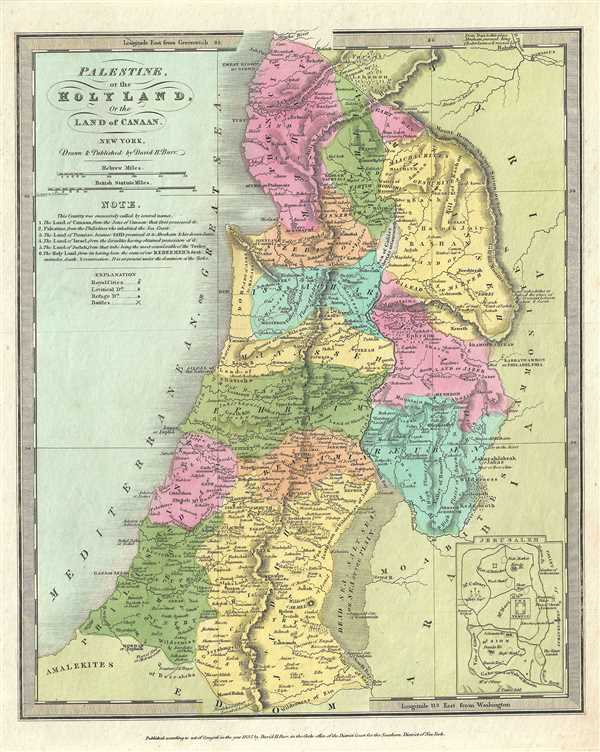 1832 Burr Map of Palestine, Israel or the Holy Land

Burr's map of Palestine during the waning Ottoman years

This is an interesting 1832 example of the 1832 first edition map of Israel, Palestine or the Holy Land by David H. Burr. It covers the region from Sidon south to the southern tip of the Dead Sea and includes the modern day nations of Israel, Lebanon and Palestine as well as parts of Jordan and Syria. The regions claimed by the various tribes of Israel are noted by color-coding. The map identifies numerous cities, river systems, historical sites, battlegrounds, and mountain ranges. A note under the title lists the various names by which this region has been called. An inset of Jerusalem in included in the lower right quadrant.

Burr prepared this map in the waning years of the Ottoman Empire whose influence, though rapidly declining, still held sway over much of the Middle East. In 1832, Palestine was conquered by Muhammad Ali's Egypt following the Egyptian-Ottoman War. British intervention returned control of Palestine to the Ottoman rulers in 1840, which lasted until World War I.

According to Ristow, although Burr is credited on the title page, he left this atlas incomplete. He was appointed as topographer to the U.S. Post Office, and of the sixty-three maps finally included in this atlas, only completed eight. The rest of the maps were then completed by Illman and Pilbrow in Burr's style. This map was ‘Entered according to act of Congress in the year 1832 by David H. Burr in the Clerk’s office of the District Court for the Southern District of New York’, but was not published until the atlas was released in 1835. Published by D. S. Stone in Burr’s New Universal Atlas.