1864 Johnson Map of Israel, Palestine, or the Holy Land 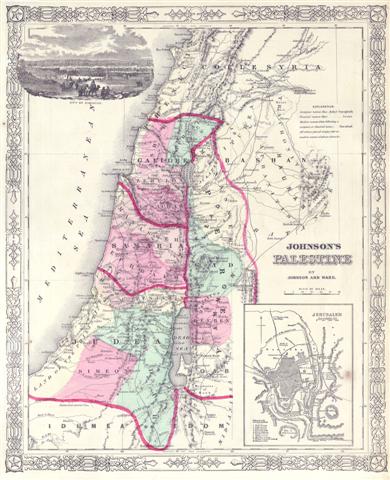 1864 Johnson Map of Israel, Palestine, or the Holy Land

This is a beautiful hand colored map of Israel, Palestine, or the Holy Land. Map details cities, roads, biblical and historical sites with color coding at the regional level. Where appropriate alternate place names taken from the Arabic are noted. Topography shown by hachure. An inset map of Jerusalem appears in the lower right quadrant with all principal buildings noted. The upper left quadrant features an engraved view of Damascus. Features the fretwork style border common to Johnson's atlas work from 1864 to 1869.