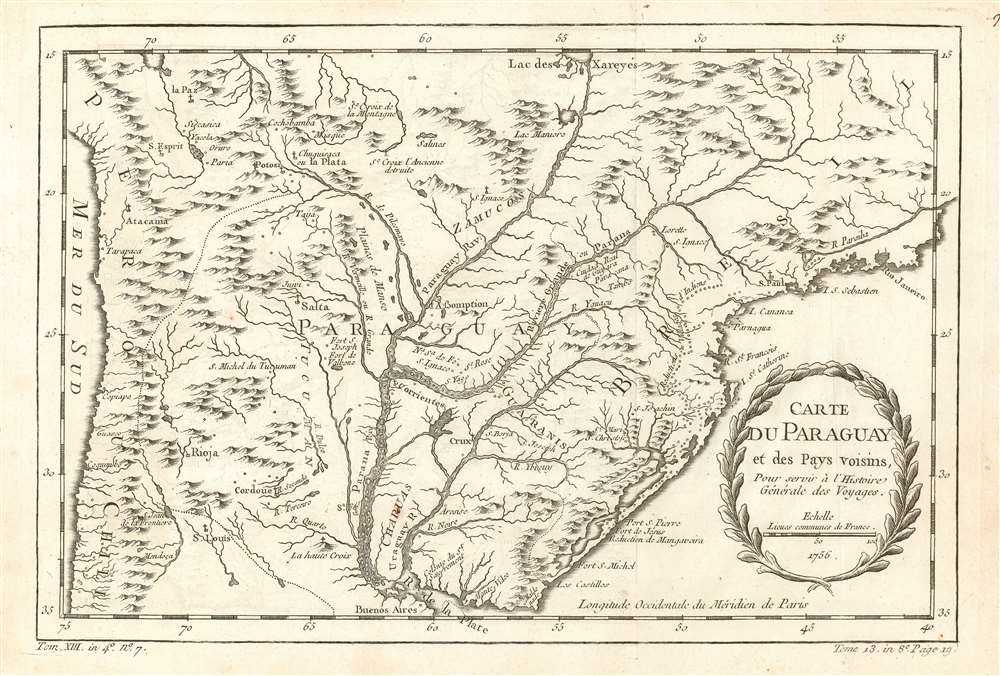 This is a 1756 Jacques-Nicolas Bellin map of southern South America. The map depicts the region from the Pacific Ocean to the Atlantic Ocean and Rio de Janeiro and from La Paz and the mythical Laguna de Xarayes to the Rio de la Plata and Buenos Aires. Highly detailed, numerous colonial cities, towns, and villages are identified, including Asuncion (Assomption), Buenos Aires, Rio de Janeiro, La Paz, and Montevideo. The Paraguay, Parana, and Uruguay Rivers are all illustrated in detail, with myriad tributaries branching off from each one.

The mythical Laguna de Xarayes, or as it is labeled here Lac des Xareyes, is illustrated here as the northern terminus, or source, of the Paraguay River. The Xarayes, a corruption of 'Xaraies' meaning 'Masters of the River', were an indigenous people occupying what are today parts of Brazil's Matte Grosso and the Pantanal. When Spanish and Portuguese explorers first navigated up the Paraguay River, as always in search of El Dorado, they encountered the vast Pantanal flood plain at the height of its annual inundation. Understandably misinterpreting the flood plain as a gigantic inland sea, they named it after the local inhabitants, the Xaraies. The Laguna de los Xarayes almost immediately began to appear on early maps of the region and, at the same time, to take on a legendary quality. Later missionaries and chroniclers, particularly Díaz de Guzman, imagined an island in this lake and curiously identified it as an 'Island of Paradise,'

This map was created by Jacques-Nicolas Bellin for publication in Abbé Prévost's Histoire Générale des Voyages in 1756.