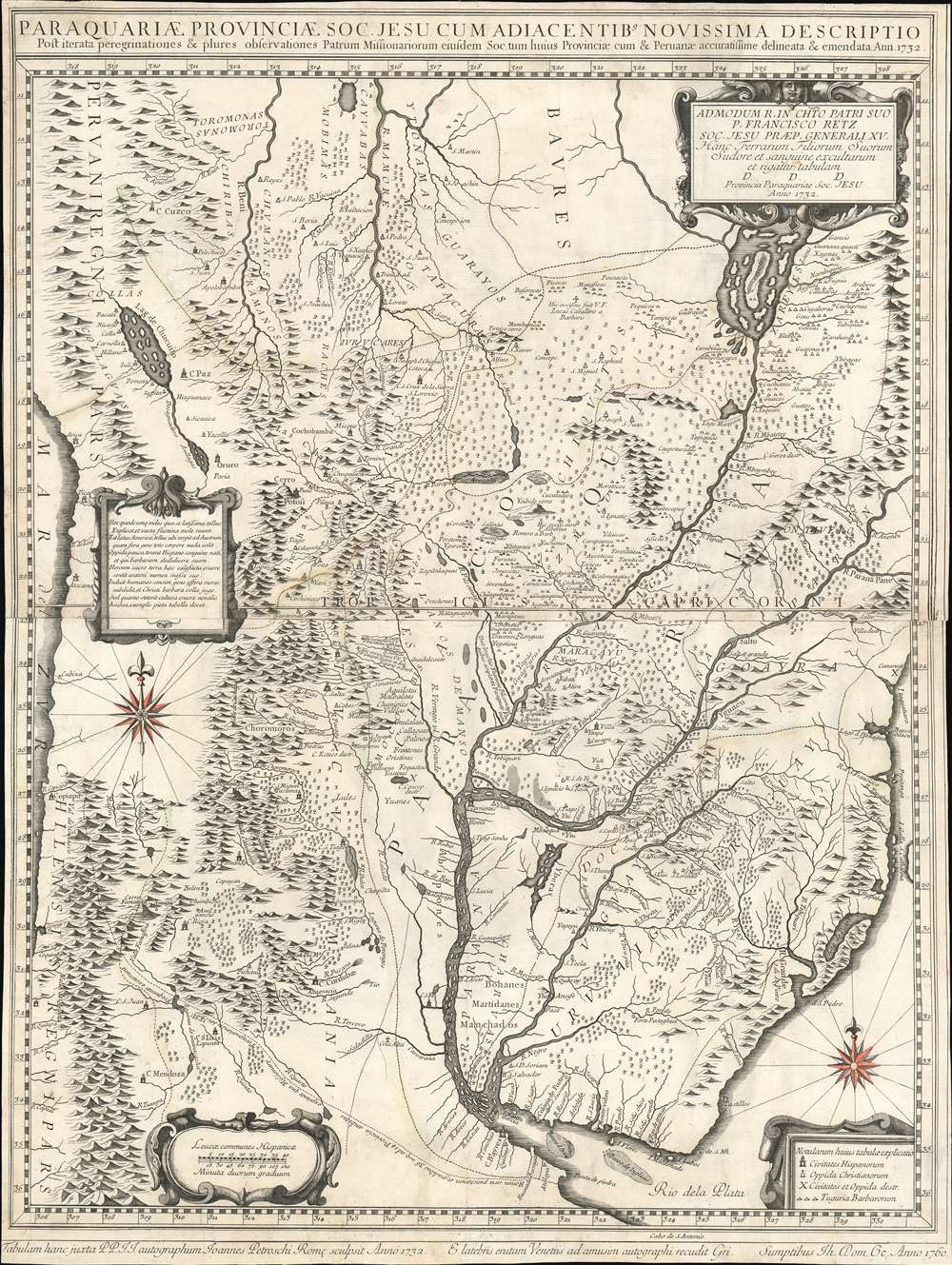 …most complete and most comprehensive map undertaken by the Jesuits up to the middle of the eighteenth century. - Furlong
$2,750.00

A rare example of the 1760 edition of Jesuit lay brother Juan Francisco Dávila's map of Paraguay, Uruguay, and La Plata. The map details the Río de la Plata basin, presenting the most advanced cartographic representation of the region available at the time of publication. Coverage extends from the Pantanal region and the northern extremis of the Paraguay River, the fictional Laguna de Xarayes, to Buenos Aires, Montevideo, and the mouth of the Río de la Plata. Focus is on the Jesuit Reductions, inland Jesuit missionary settlements of extreme wealth and prosperity that dominated the inland river systems between the Paraná River and the foothills of the Andes.

Jesuit Reductions and the Suppression

This map took Dávila more than 10 years to compile. Dávila began work on this map around 1712 at the order of the Father Provincial. In a letter dated 1722, Dávila discloses that the map was made so that the Superior General Michelangelo Tamburini (1648 - 1730) could better understand distances between the Jesuit establishments in order more effectively manage the transference of personnel.

At the time, the region was dominated by an expansive network of missionary outposts collectively known as the Jesuit Reductions (Reducciones Jesuiticas). Their mission was to convert, tax, govern, and develop the indigenous population - generally Tupi-Guarani peoples. The Reductions were extremely successful on all fronts, developing a thriving inland economy largely distinct from the colonially administered coastal territoires.

The success of the Reductions led to vast wealth. The Reductions individually and collectively leveed and equipped armies from their Guarani converts. Eventually their prosperity and near independence drew the ire of colonial authorities in Europe, who increasingly sent troops into Jesuit Reduction territory. This spurred a series of armed conflicts, including the Guarani War of 1756 and led to a period known as 'The Suppression'.

With the approval of the Pope, Portuguese territories claimed by Brazil expelled the Jesuit order in 1759. The Spanish king, Charles III, was slower to act, attempting to deal with the matter internally, and integrate the missions into the colonial administration rather than move against them militarily. This failed, and in 1767, the Jesuit Order was also expelled from Spanish colonies. Some of the Reductions were partially transferred to the Franciscan order, but most of them collapsed, leaving a power vacuum and leading to social and political chaos.

The present edition of the Dávila map coincides with the Suppression Era, between 1756 and 1767, and was the premier cartographic resource used by both sides of the conflict during this turbulent period.

Between the first state of this map in 1732 and the present 1760 edition, there were numerous corrections and advances. The most significant changes appear in the region of the Zamucos and Chiquitos. In addition, the feeder rivers that flow into the Uruguay River are far better mapped, with more rivers and more accurately delineated courses. Similarly, rivers flowing to the Argentine coast are also better drawn.

This map is the work of the Jesuit lay brother Juan Francisco Dávila (1682 - 1733). The underlying cartography was completed in 1722 and the map was first published in 1726. It was subsequently updated and revised in 1732 for the Bern edition of Novelle interessanti in proposite degli affari del Portogallo. A third edition, as here, followed in 1760. There are rumors of a 1752 edition, but we have found no references or examples. The map was later copied in reduced and much abridged format by both Homann and Seutter. It was also the source for D'Anville's important map of South America.

Juan Francisco Dávila (1682 - 1733), also known as 'de Ávila, was a Spanish colonial missionary and Jesuit lay brother active in Paraguay and Argentina in the early 17th century. Dávila was born in Buenos Aires. He spent 10 years between 1712 and 1722 mapping the Jesuit Reductions in the Rio de La Plata Basin. Little else has been recorded of his life. Learn More...


Giovanni Petroschi (1715 - 1766) was an Italian engraver, cartographer, and map publisher based in Rome. He was considered the foremost authority on Latin American cartography in the first half of the 18th century. He published several important Jesuit maps, including Carolo Brentano's Provincia Quitensis (1751) and Jose Antonio de Sylverio Villaseñor y Sánchez 's map of Mexico (1754). Although significant as a cartographer, Petroschi, like many Jesuit publishers, lived humbly in religious obscurity. Learn More...