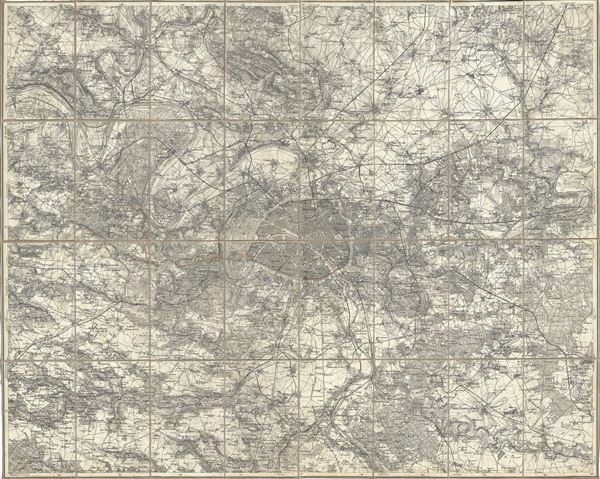 This is an extremely attractive c.1860 pocket map of Paris and its environs by Depot de Guerre. Centered over the city of Paris, it covers the Seine Valley from Meulen-en-Yvelines to Soignolles-en-Brie. Rouvres appears in the extreme northeast and Dampierre-en- Yvelines. The map offers extraordinary detail throughout showing gardens, forests, palaces, fortresses, chateaux, and often individual smaller buildings. Also details railroad lines. It reflects the transformation and modernization of Paris under Napoleon III and Georges-Eugène Haussmann. Though generally speaking this is a black and white map, there are several color markings in black and red ink that seem to suggest some sort of military use, but none that we can specifically identify.

Depot de Guerre (1688 - 1887) was a branch of the French military devoted to creating, collecting, and publishing military memoirs, plans, and maps. The Depot was founded in 1688 by Francois Michel le Tellier, the Marquis de Louvois. Louvois held the post of Secretary of State for War under Louis XIV and his best known for composing the first letter regarding the mysterious "Man in the Iron Mask". During the French Revolution and the Napoleonic Wars the Depot de Guerre expanded its operations to include any and all topographical research in France. In 1887 the Depot de Guerre was disbanded and its duties split between the Institut Geographique National (IGN) and the Service Historique de L'Armee (SHA). Learn More...