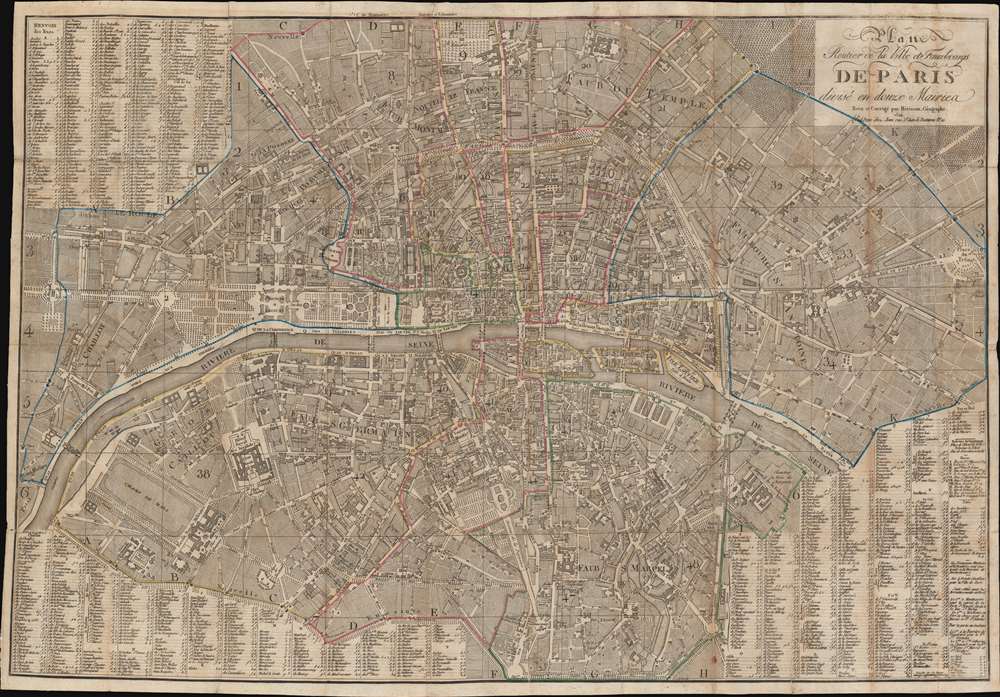 This is a striking 1824 Eustache Hérisson city plan or map of Paris, France. Centered on the Ile de la Cité, this map depicts central Paris from the Champ de Mars and the Arc de Triomphe to the Place du Trone (Place de la Nation), and from the Hôpital St. Louis to the Observatoire de Paris. The map illustrates gardens, important buildings, cemeteries, parks, streets, public places, bridges, and twelve districts, or Maries. Surrounding the map is a comprehensive street index. This is the Paris of Victor Hugo, Théodore Rousseau, and Jean-Pierre Dantan.

This map was 'revised and corrected' by Eustache Hérisson and published by the Chez Jean firm. Hérisson published several editions of his map of Paris, all of which are rare. We note only a single cataloged example of the present edition, located at the Bibliothèque nationale de France.


Pierre Jean (1754 - 1829) was a French engraver, publisher, print seller, and map maker active in Paris in the late 18th and early 19th centuries. Jean entered the engraving and printing business on June 7 of 1784 when he married the daughter of Louis-Joseph Mondhare, a prominent French engraver, print seller and map publisher. Mondhare changed the name of his firm to Mondhare & Jean. Under Mondhare, for about 12 years, Jean mastered the in-and-outs of the engraving and map publishing business. Mondhare retired in 1796, leaving Jean his business and printing plates. Jean subsequently continued to publish on his own account, as Chez Jean, from the old Mondhare & Jean offices at 32 Rue Saint-Jean de Beauvais. Learn More...