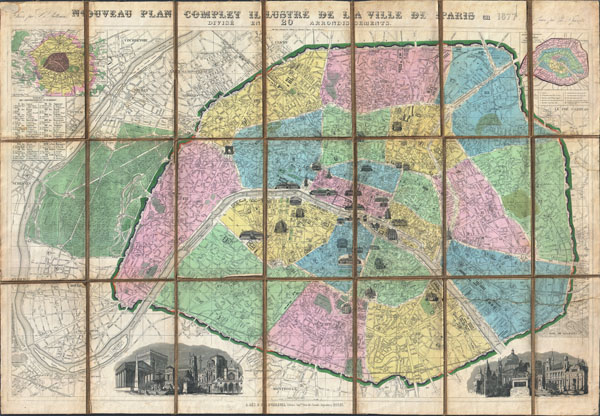 A spectacular 1877 folding pocket map of Paris, France by the French cartographer A. Vuillemin. Covers the entire city and environs in spectacular detail at the level of individual streets, bridges and buildings. Divided according to 20 Arrondisments. Important and historic buildings are shown as views. These include the Arc de Triomphe, the Palace Royal, Notre Dame, the Hotel des Invalides, the Pantheon, the Tour St. Jacques, and the Hotel de Ville, among others. An inset map in the upper left quadrant shows the greater Paris vicinity as far as Versailles. Another inset map, in the upper right quadrant, details the Arrondisment system. In the lower left and lower right quadrants there are beautiful engraved views depicting the monuments of Paris in composite. All text is in French. Engraved by Charles Dyonnet for A. Vuillemin in 1877.

Alexandre Vuillemin (1812-1880) was a cartographer and an book editor based in Paris, France. Despite a prolific cartographic career, much of Vuillemin's life is shrouded in mystery. What is known is that his studied under the prominent French Auguste Henri Dufour (1798-1865). Vuillemin's most important work his detailed, highly decorative large format Atlas Illustre de Geographie Commerciale et Industrielle.