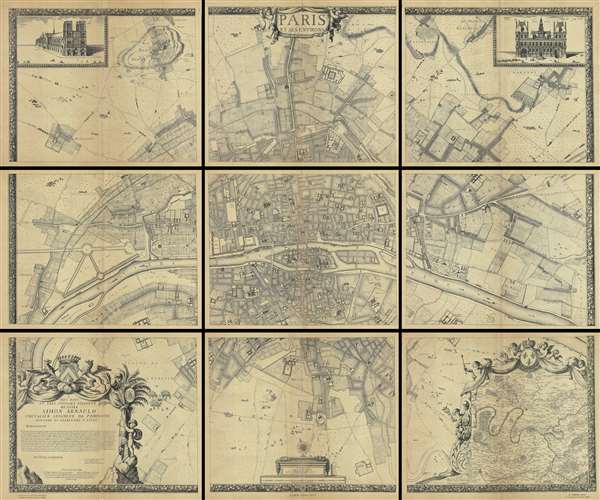 A rare example of the c. 1900 reissue of Albert Jouvin de Rochefort's monumental 1675 nine panel map of Paris. Rochefort's plan of Paris was influential due to its illustration of the rapidly expanding urban center of Paris. This highly decorative chart shows most major streets with important buildings (and even farmers) rendered in profile. Vignettes in the upper left and right quadrants detail Notre Dame and the Hotel de Ville, respectively. A large decorative cartouche in the lower left quadrant includes a note from the author and a dedication to Simon Arnauld, a powerful French diplomat.

Albert Jouvin de Rochefort (c. 1640 - c. 1710) was a French cartographer and government official active during the second half of the 17th century. Rochefort is a little known figure who served as Treasure to the King of France at Limoges from 1675 to 1702. In this capacity he traveled extensively throughout France and Europe in General, publishing an account of his travels with the firm of Thierry, Louis and Claude Barbin Billain. He apparently also traveled extensively in Egypt, the Holy Land, and Turkey. He produced several important maps, most of which are on a massive scale, to illustrate his cardinal work, Le voyageur d'Europe, où sont les voyages de France, d'Italie et de Malthe, d'Espagne et de Portugal, des Pays Bas, d'Allemagne et de Pologne, d'Angleterre, de Danemark et de Suède. In 1672-5 Rochefort issued a monumental plan of Paris in nine panels, Paris et ses Environs followed by a smaller plan in 1697, Nouveau plan de Paris. Apparently a portrait of Rochefort is preserved in the National Library of France.

Very good. Some toning on original fold lines. A couple of sheets have closed tears which have been repaired. Overall brittleness. Presented in original cardboard folio. In nine separate panels.