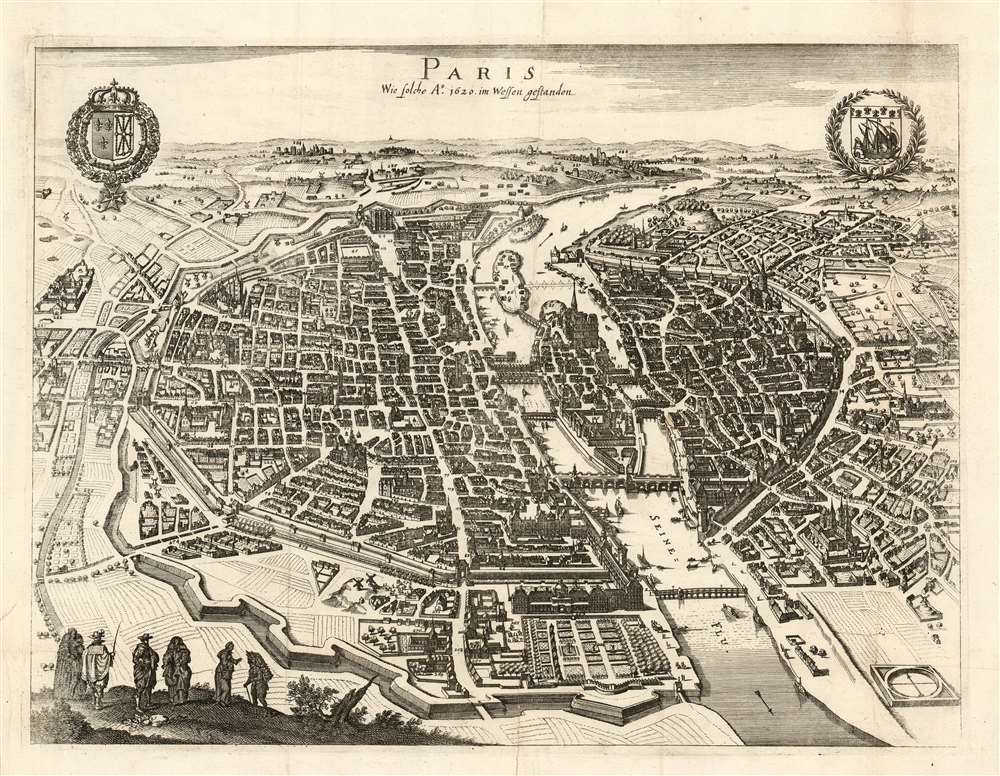 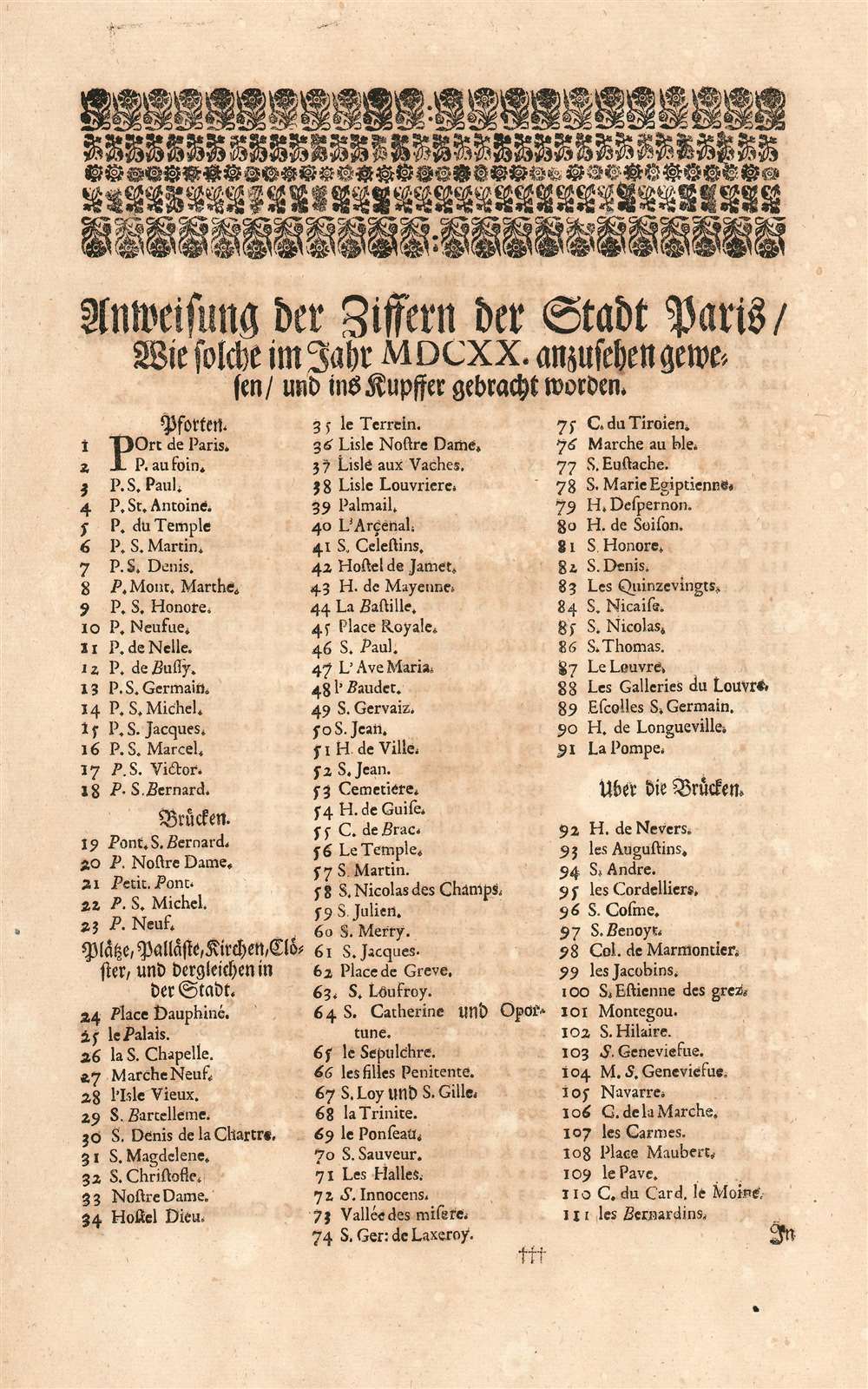 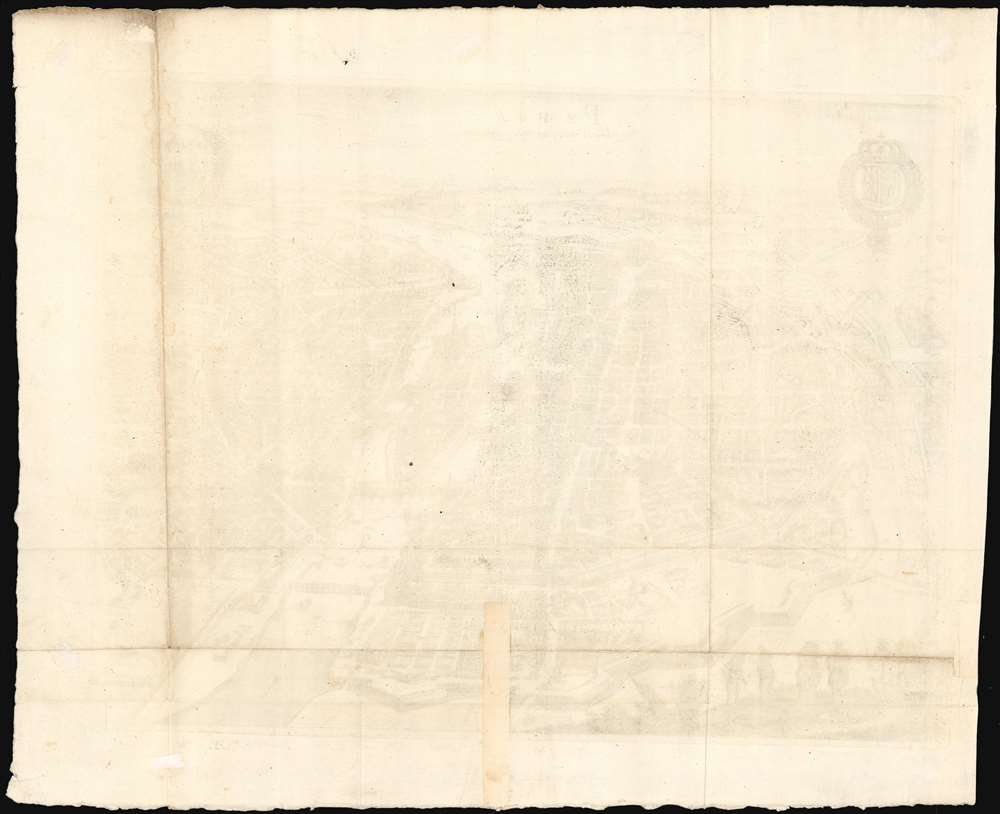 This is a 1655 Caspar Merian bird's eye view of Paris, France. It appeared in Merian's Topographiae Gallae,, published in Frankfurt in 1655. The view is oriented to the north-east, looking up the Seine towards Notre Dame (at center). Boats can be seen plying the river (whose direction of flow is indicated with arrows.) The walled city has 290 of its principal structures numbered to a key which appeared in the text.* The title of the view indicates that it portrays Paris 'as it stood in 1620,' perhaps in order to imply it was composed by the elder Merian to accompany his famous panorama which was executed in and around that time. This was misleading on Caspar's part: this view is in fact a reduced and embellished version, not of a Merian plan of 1615, but the 1635 edition Melchior Tavernier's bird's eye view of Paris. The Tavernier lacks Merian's decorative flourishes: the coats-of-arms of Paris and of France; the figures in the garb of Parisians of various stations depicted in the lower left; and the helpfully-placed compass shown in the lower right-hand corner of the view.

*the first leaf of the text list is present with the map, with the remainder present in reproduction.

This view was created by Caspar Merian for inclusion in his Topographiae Gallae, published in Frankfurt am Main, in 1655 with a further editions 1661. The Topographiae is well-represented in institutional collections. Although this view does appear on the market from time to time, it is catalogued in OCLC as a separate engraving only in the Herzogin Anna Amalia Bibliothek Klassik, the Biblioteca Nacional de Espana and Simon Fraser University.

Matthäus Merian (September 22, 1593 - June 19, 1650) was a important Swiss engraver and cartographer active in the early to mid 17th century. Merian was born in Basel and studied engraving in the centers of Zurich, Strasbourg, Nancy and Paris. In time Merian was drawn to the publishing mecca of Frankfurt, where he met Johann Theodor de Bry, son of the famed publisher Theodor de Bry. Merian and De Bry produced a number of important joint works and, in 1617, Merian married De Bry's daughter Maria Magdalena. In 1623 De Bry died and Merian inherited the family firm. Merian continued to publish under the De Bry's name until 1626. Around this time, Merian became a citizen of Frankfurt as such could legally work as an independent publisher. The De Bry name is therefore dropped from all of Merian's subsequent work. Of this corpus, which is substantial, Merian is best known for his finely engraved and highly detailed town plans and city views. Merian is considered one of the grand masters of the city view and a pioneer of the axonometric projection. Merian died in 1650 following several years of illness. He was succeeded in the publishing business by his two sons, Matthaus and Caspar, who published his great works, the Topographia Germaniae and Theatrum Eruopeaum, under the designation Merian Erben (Merian Heirs). Merian daughter, Anna Maria Sibylla Merian, became an important naturalist and illustrator. Today the German Travel Magazine Merian is named after the famous engraver. Learn More...