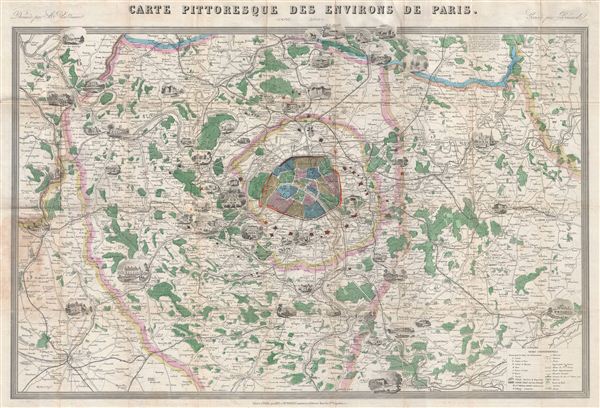 An appealing c. 1870 pictorial map of the environs of Paris by A. Vuillemin. Centered on the embastilled center of Paris, this map overs from St. Pierre in the northwest to Chartres in the southwest to Oulchy in the northeast and Provins in the southeast. Designed with the tourist i mind this map highlights important attractions, including picturesque villages, chateaux, bridges, and churches pictorially. The many forests surround Paris are highlighted and hand colored in greens. This map was drawn by A. Vuillemin and engraved by Bernard for publication by Bes et Dubreuil of Quai des Gds. Augustins, no. 17.

Good condition. Original folds exhibit wear and verso reinforcement, especially at fold intersections. Some discoloration where attached to original binder. Comes folded, as issued, but can be flatted by framer for presentation.