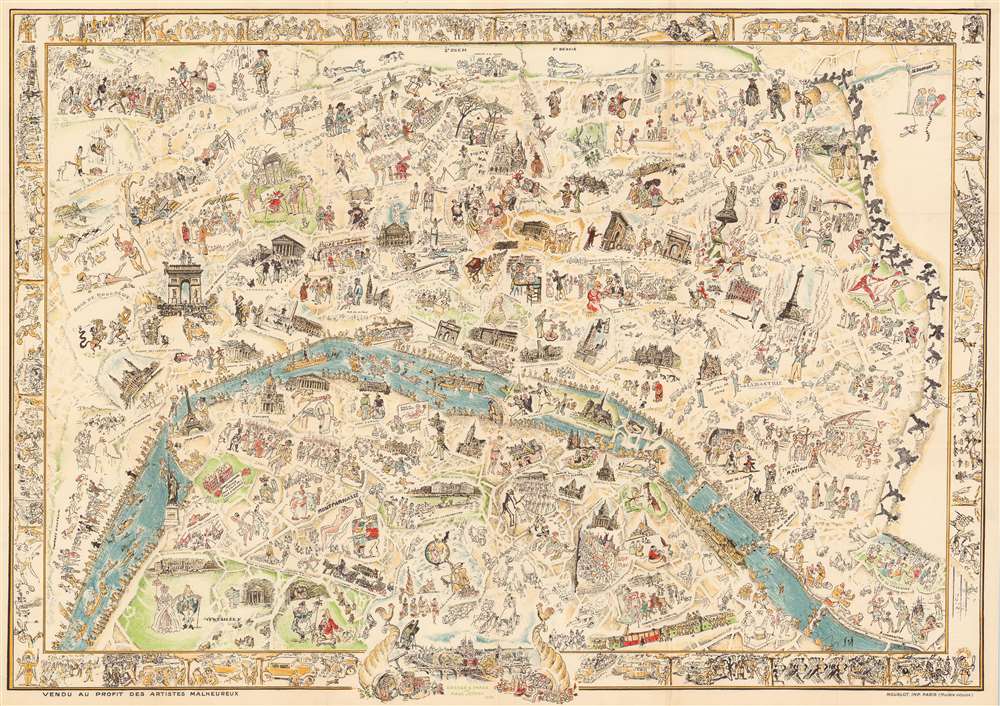 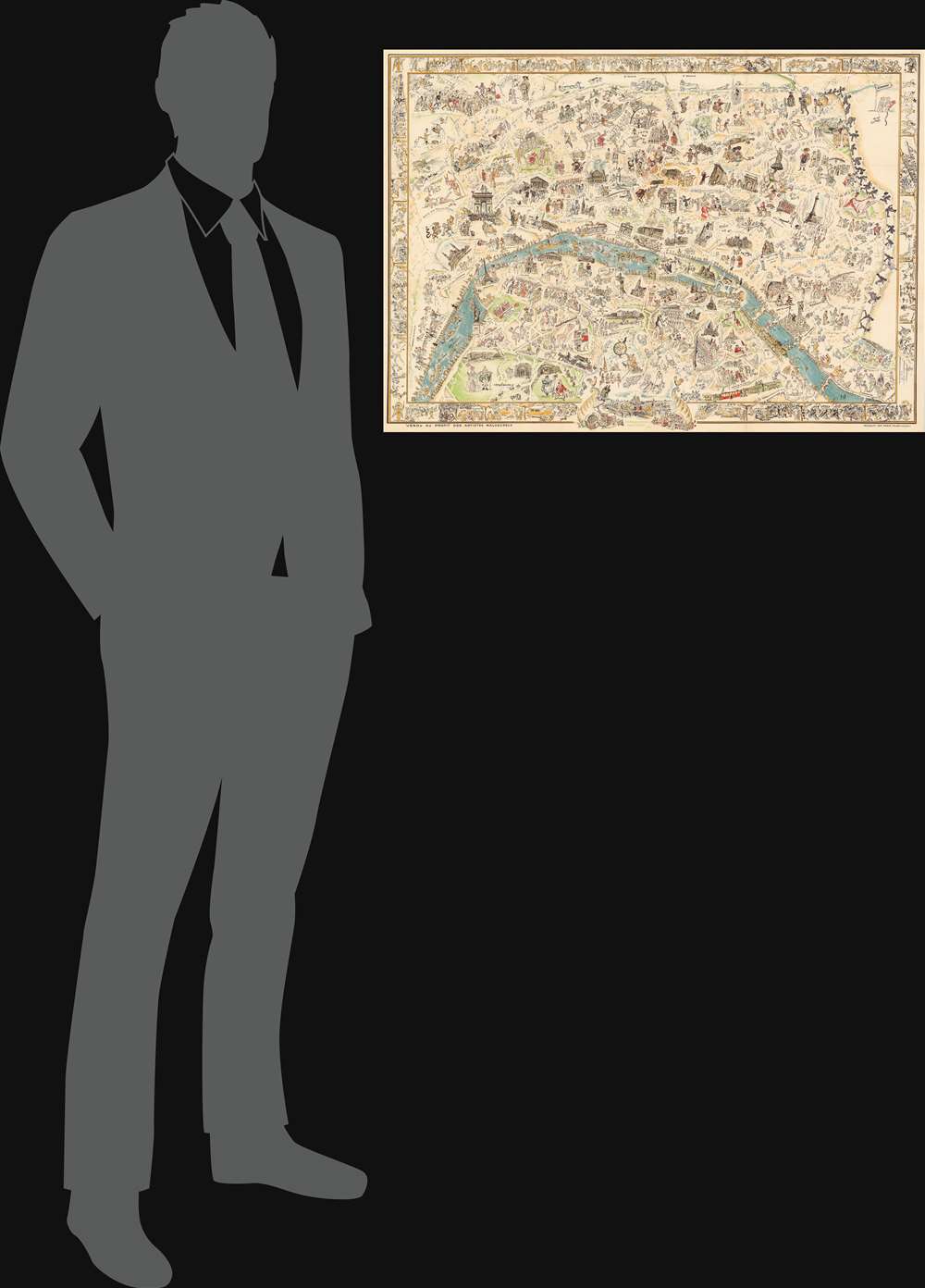 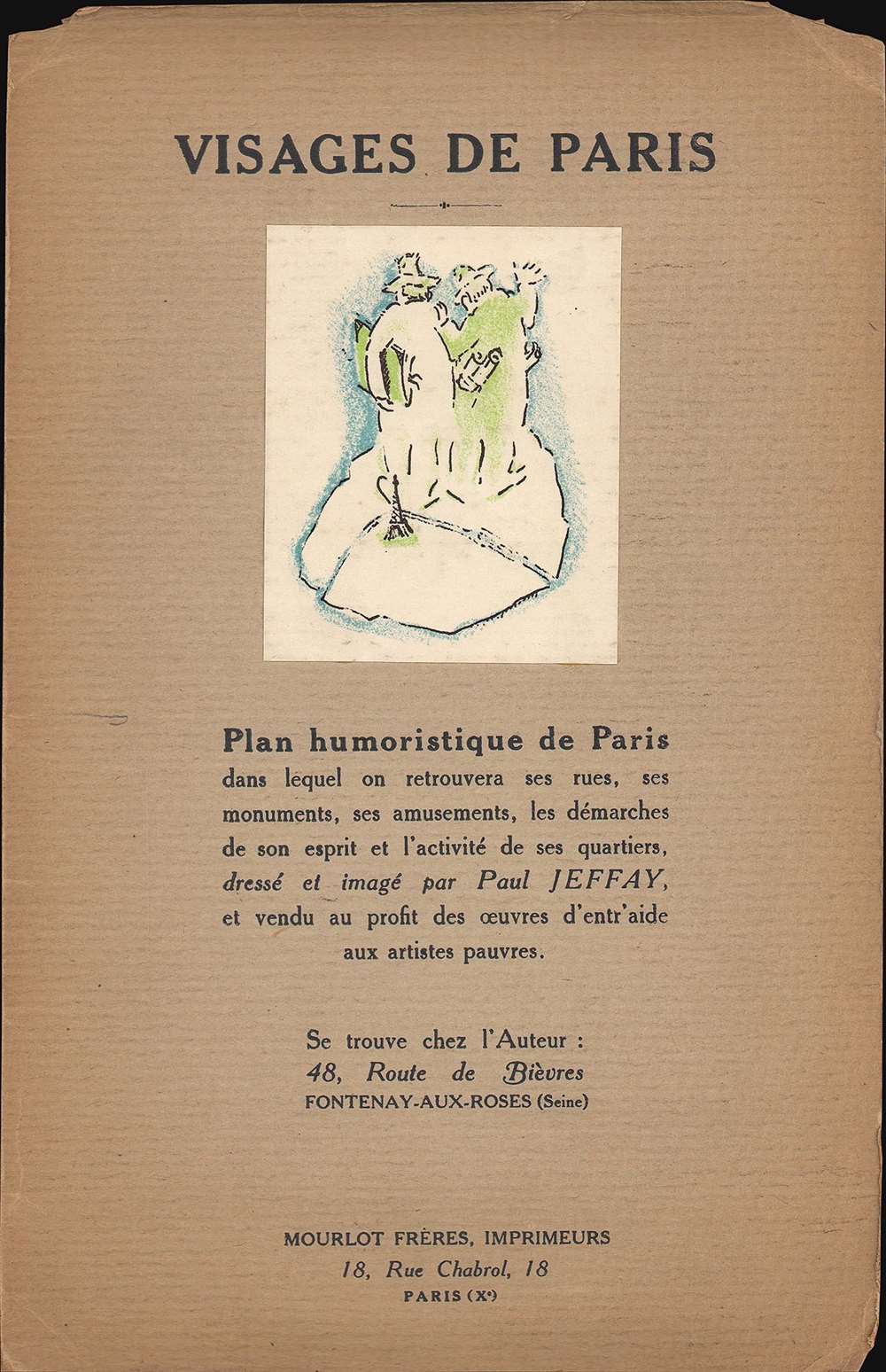 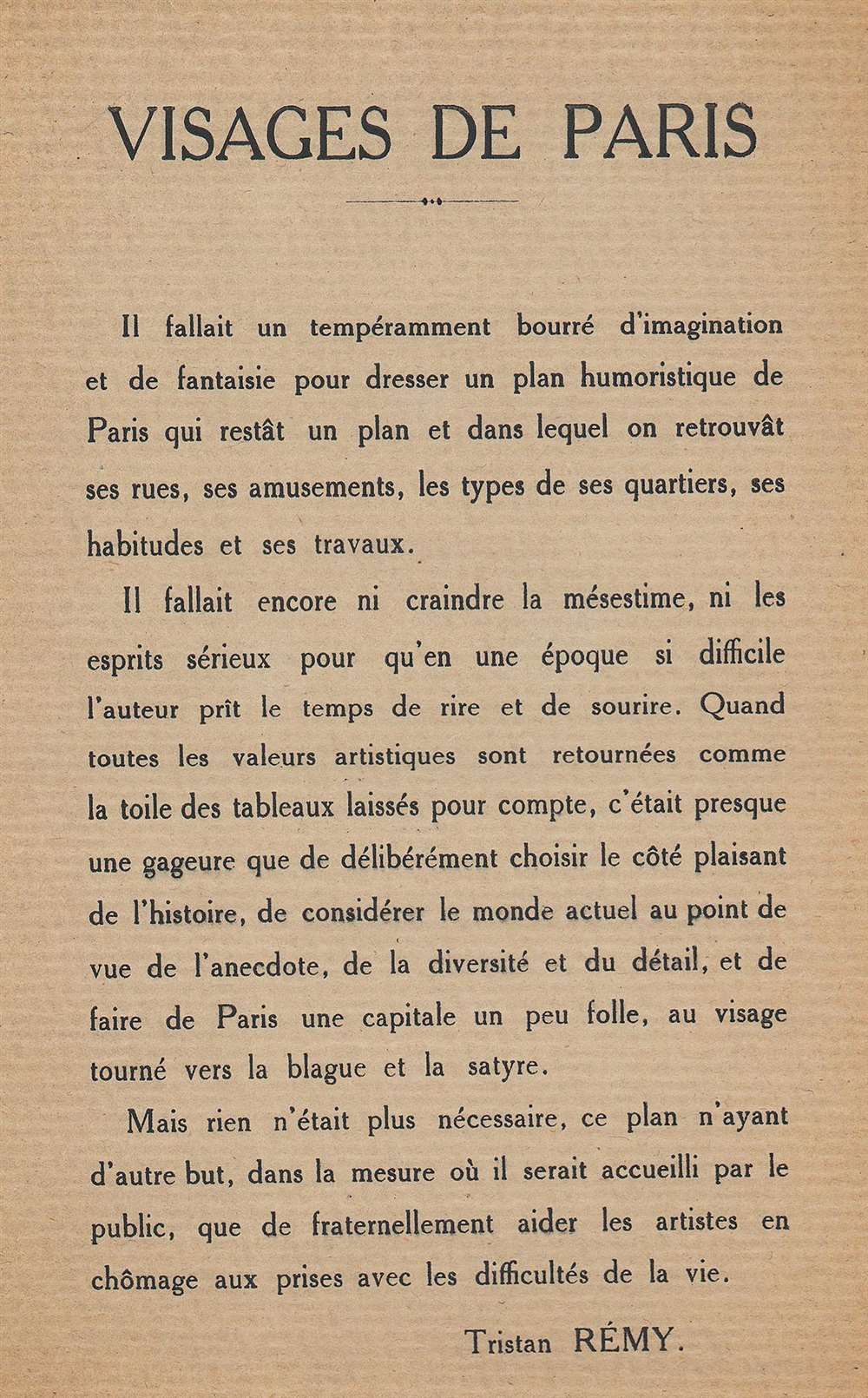 This is a 1933 Paul Jeffay rare pictorial map of Paris, France, created to support out-of-work artists during the Great Depression (1929 - 1939).

Vignettes illustrate Paris' rich arts community. Painters appear in various neighborhoods, including Montmartre, Parc Monceau, and Montparnasse, where the Jeffay himself paints a nude. The chaos of Paris is conveyed by the narrow roads and vignettes of auto accidents spotted throughout. The Eiffel Tower, the Trocadero, the Louvre (complete with an illustration of the Mona Lisa), and the Arc de Triomphe welcome viewers to the Paris of daydreams. Clowns dance, a giraffe wears a top hat in the Jardin des Plantes, and the devil (who appears in several places around town) chases a nude woman through Père Lachaise. A sign in front of the École Militaire (a French military academy not far from the Eiffel Tower) reads 'Closed due to Eternal Peace'. The whole is surrounded by a pictorial border composed of street scenes with Paris gendarmes as angels. The detail present here is fantastic and one will never tire of looking for new details.

Pictorial qualities have been common in cartography from at least from the 16th century when publishers like Braun and Hogenberg incorporated view-like qualities and other pictorial elements into their famous city plans. Braun and Hogenberg, and similar cartographers, issued their town books to express, not necessarily the geography of their subjects, but rather the 'essence' of the town/city. As mathematics and surveying principles became more advanced, travel increased, and the ability to translate 2 dimensional cartographic perspectives into an understanding of the actual world became commonplace, maps themselves transformed. This trend is a recognizable progression that evolved cartographic conventions from the 17th to the 19th centuries. By the late 19th century most maps had become geographical tools that illustrated the region cartographically but failed in the original raison d'être as expressed by Braun and Hogenberg, to illustrate a place's 'essence'. So, where a city map of 19th century Paris might provide a completely navigable presentation of the city, one could glean almost nothing of Paris' character from it. In the late 18th century, the first modern 'pictorial' style maps developed. These maps, like Tomas Lopez's 1788 map of Seville, attempted to provide both cartographic accuracy and pictorial elements that might convey the character of the city. In that case, Lopez incorporated pictorial vignettes to illustrate important buildings and monuments. This style became increasingly common throughout the 19th century and early 20th centuries, particularly for centers of commerce like London, Paris, and Rome, where they are often mass produced and referred to as 'monumental' maps. The style further evolved in the early to mid-20th century, when revolutionary cartographers and illustrators like MacDonald Gill, Jo Mora, Frank Dorn, Ernest Dudley Chase, and many others, combined vignette style illustrations, modern printing techniques, inspiration from Japanese printmaking and manga, and from clever satirical cartographers/artists like Fred Rose, to produce maps that once again focused on revealing the essence a place, usually, but not always, at the sacrifice of cartographic precision.

This map was created by Paul Jeffay and published by Mourlot Frères in 1933. We note a single example cataloged in OCLC, located at the National Library of Scotland.

Paul Jeffay (April 29, 1898 - 1957) was a Scottish artist. Saul Yaffie (Paul Jeffay was a pseudonym) was born in Blythswood, Glasgow to Russian immigrant parents Kate (née Karkonoski) and Bernard Yaffie. Kate and Bernard fled Russia in 1881 to escape pogroms set off by the assassination of Tsar Alexander II. They were among the first 20th century Jewish immigrants to settle in The Gorbals, the neighborhood that became the heart of the Glasgow Jewish community. Bernard was a master tailor, whose business eventually prospered, allowing the family to move to a more affluent neighborhood. Yaffie attended classes at the Glasgow School of Art from 1912 through 1919. While at the school, Yaffie won a poster competition at the outbreak of World War I and this work, illustrating a woman with a child fleeing a fire, was displayed on Glasgow's trams. His studies were interrupted by service in the British Army from 1916 - 17. Records indicate before his time in the army (which was either voluntary or conscription - Yaffie's biographies do not agree on this detail), Yaffie worked in munitions. During his service, Jeffay reached the rank of corporal and likely served with the 38th Battalion of the Royal Fusiliers, part of the so-called Jewish Legion. However, records from the Glasgow School of Art suggest that he served with the King's Own Scottish Borderers as well. After graduating from the Glasgow School of Art after the war, Yaffie decided to 'try his luck' in Paris. He spent the rest of his life in Paris (except for World War II years when he and his wife Estusia left France and went to Glasgow and then settled in Manchester). It was during his time in Paris that Yaffie began signing his art as Paul Jeffay. While Yaffie was making his way in the art world in Paris, his father's tailoring business suffered because of the post-war economic depression, which led him and the rest of the family to emigrate to Canada. Yaffie exhibited his work several times in Paris during the 1920s and 1930s, including at the Salon des Artists Indépendants. His studio in Fontenay-aux-Roses was looted by the Germans during World War II, so very little of his art survives. One of his most well-known series, entitles Visages du ghetto is a series of fourteen etchings created in a Polish ghetto (likely Warsaw) during the Interwar years when he reportedly traveled to Poland several times. Learn More...