1875 Renault and Buquet Foulard Map of Paris (on linen) 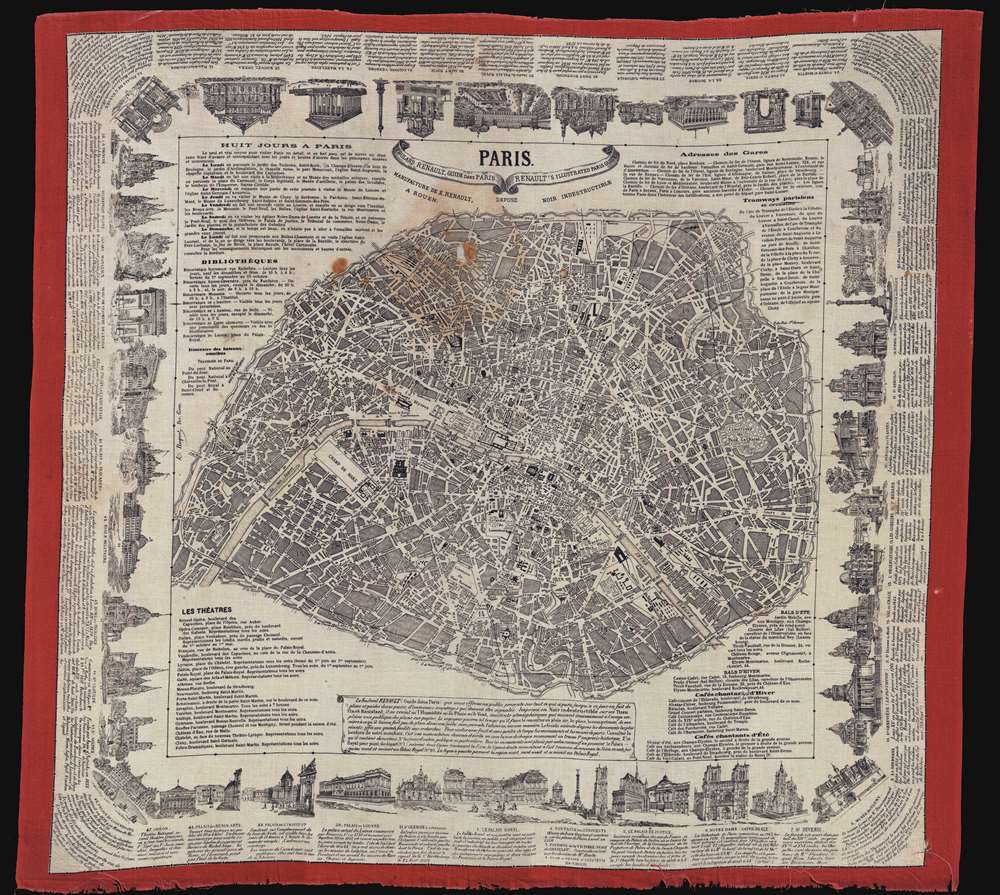 1875 Renault and Buquet Foulard Map of Paris (on linen)

Stay fashionable, wipe the sweat from your brow, and know your way around Paris like a local!
$750.00

Stay fashionable, wipe the sweat from your brow, and know your way around Paris like a local! This might be the advertising mantra for this map, Renault's c. 1875 foulard map of Paris. Geared toward the tourist market, this handsome map is printed on linen and promises durability and practicality. As the author comments, this foulard ne craint ni L'humidite ni la pluie ni le vent (fears neither humidity, nor rain, nor wind). The map details the fortified center of Paris with all major streets, boulevards, and important buildings noted. It is surrounded by extensive textual annotation describing train stations, tramways, bals d'ete (summer balls), theaters, cafes, and more. This itself is surround by engraved images of 51 important Parisian monuments along with descriptions. It is from one of these, the Elysée Palace, that we can extrapolate the date form this otherwise undated map. The description references MacMahon, who was president of the republic from 1873 to 1879, so the scarf was most like printed during this period. It was engraved by Alexandre Buquet of Rouen for E. Renaut.

E. Renault (fl. c. 1860 – c. 1890) was a French fabric designer and printer based in Rouen. Renault established a successful business by aligning himself with the Alexandre Bouquet family, also of Rouen, to produce elaborately printed and engraved handkerchiefs and foulards, that is, scarves. Branded as 'indestructible' these handkerchiefs were printed with maps, technical diagrams, military guidelines, commemorative images, and more.


Narcisse-Alexandre Buquet (May 19, 1825 – 1894) was a French designer and engraver. Buquet was the scion of a family of artists based in Rouen. He is most admired today for his engraving work in conjunction with finely illustrated handkerchiefs and scarves. His father, also Alexander Buquet (1802 – 1865), as seems to have been in the handkerchief / scarf business. Much of Buquet's work was published by E. Renault.

Printed on linen. Some staining. Edge wear.
Looking for a high-resolution scan of this?