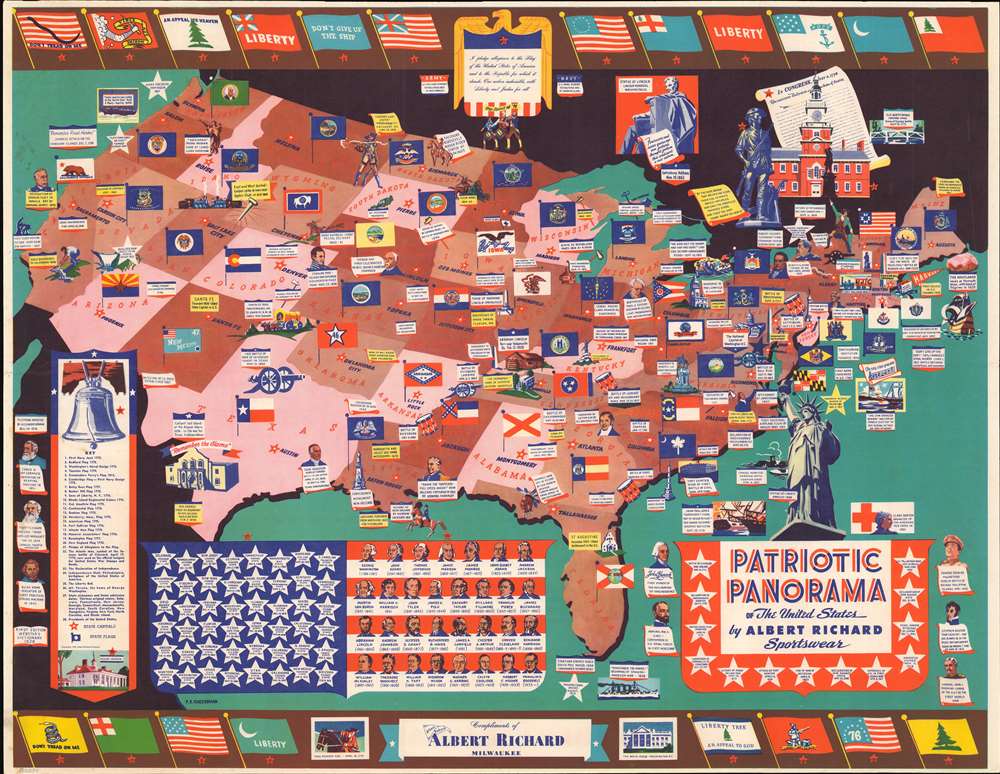 Promotes American patriotism less than a year after Pearl Harbor.
$900.00

Blending civics and history, state flags and capitals and national parks appear alongside moments in American military history. References to the Hoover Dam, the transcontinental railroad, and the Erie Canal laud American ingenuity, as do portraits of great American inventors, including Thomas Edison, Eli Whitney, and Samuel Morse. Twenty different flags, many of which are battle flags or naval standards, appear along the top and bottom borders. An American flag, situated on the lower left, bears the state's nicknames and date of admission into the Union and the portraits of the U.S. Presidents up to Franklin Roosevelt. A key, just to the left of the flag, identifies twenty-eight illustrations around the map, including every flag along the borders.

Small textboxes drawn as small shields dot the map from coast to coast. Many of these, although not all, mark battles in American history from the American Revolutionary War through the American Civil War, known here as the War of Secession. Each shield bears the battle's name and its date. Other great moments in America's military history surround the title cartouche in large white stars. Portraits of American military leaders, including MacArthur and Pershing, are illustrated here as well.

This map was created by F.E. Cheeseman and published by Albert Richard Sportswear in 1942. An example is part of the David Rumsey Map Collection and it occasionally appears on the private market.


Albert Richard Company (c. late 1920s - c. 1955) began as a division of the Fried-Ostermann Company of Milwaukee, Wisconsin. Fried-Ostermann was a glove manufacturer, and in the late 1920s, decided to diversify their production and opened a division to produce outerwear, which they called Albert Richard. Albert Richard produced leather jackets, mackinaws, overcoats, and sportswear and would soon become more profitable than the glove-making part of the company. Before World War II, Albert Richard advertising focused on health and sports, and received endorsements from college football players. From about 1938 to 1950, Albert Richard partnered with F. E. Cheeseman to published a series of poster size college football maps, which bore advertisements for the company’s jackets on the verso. After the outbreak of World War II, Albert Richard began manufacturing flight jackets for the military under the name of their parent company Fried-Ostermann. Leather jackets, overcoats, and similar products were heavily advertised by Albert Richard during the war. They also gave their jackets model names like ‘Spitfire’ and ‘Meteor’. During the war Albert Richard also gave away wall-sized posters depicting various American military aircraft. Fried-Ostermann sold Albert Richard to the Drybak Corporation of Binghampton, New York in 1952. Daybook began manufacturing Albert Richard clothing in 1953 at a factory in New Jersey, with plans to move production to New York by 1954. However, in 1955, Drybak bought the Martin Mfg. Co. of Martin, Tenessee, closed their operations in Binghampton and moved to the plant in Tennessee, where labor prices were lower. Learn More...