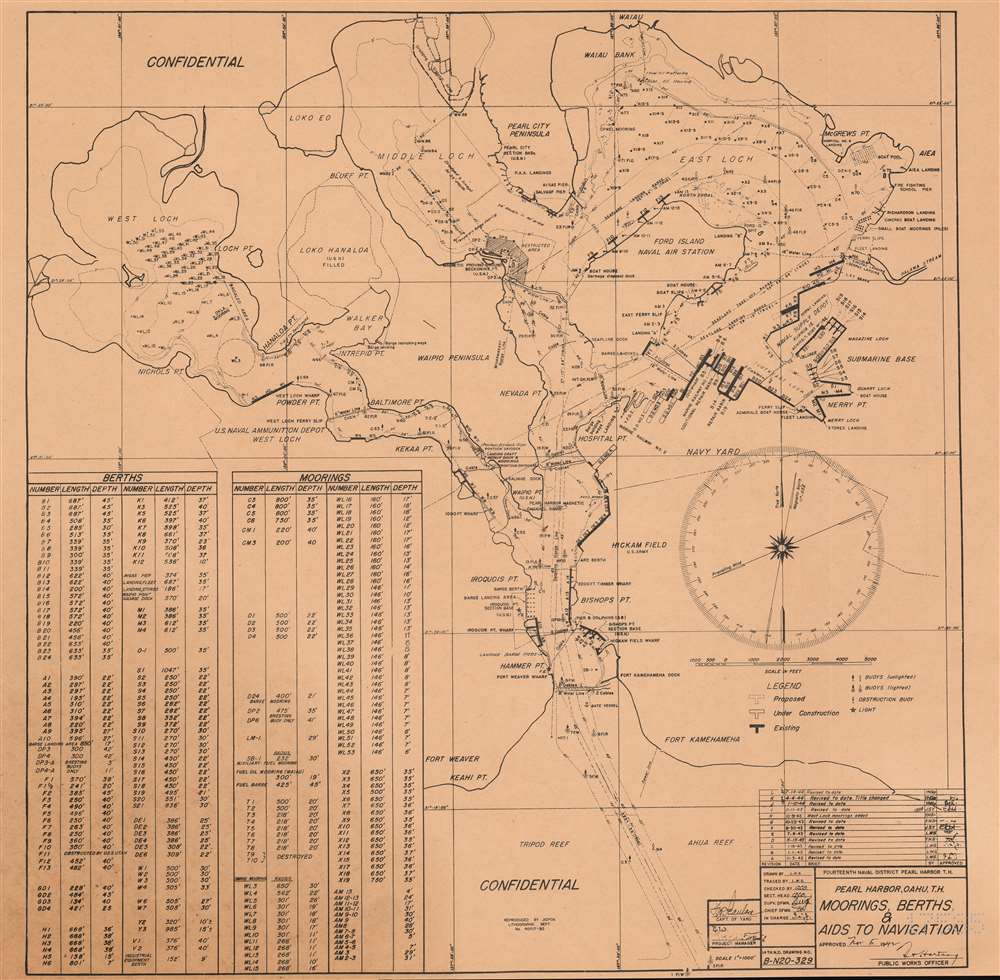 Marks the final resting places of both the USS Arizona and the USS Utah, two American battleships sunk during the Japanese attack on December 7, 1941.
$1,200.00

An incredibly important historical artifact, this is a United States Navy map of Pearl Harbor, Hawaii referencing the December 7, 1941 Japanese Attack on Pearl Harbor. Marked 'confidential' at both top and bottom, the map depicts the harbor from Waiau to Tripod Reef and Ahua Reef and from West Loch to the Submarine Base and Aiea. Highly detailed, moorings and berths are labeled throughout via a table situated in the lower left providing the number, length, and depth of each. Ford Island Naval Air Station, Hickam Field, and the submarine base, as well as drydocks, seaplane landing and take-off ranges, and the Naval Supply Depot are also identified. Lighted and unlighted buoys are also marked, providing a navigator some help in maneuvering through the tight confines of the harbor.

This Map and the Japanese Attack on December 7, 1941

Although this map was published in July 1944, a handful of notations printed here directly reference the December 7, 1941 attack. Battleship Row, perhaps the most famous site associated with the attack, is situated on the right side of Ford Island and marked by mooring quays F1 through F8, where the battleships were at anchor that fateful morning.

The USS Arizona, one of several ships sunk that morning, is illustrated at its berth, number F7, where it remains at the bottom of the harbor as a memorial to the 1,177 officers and crewmen who lost their lives. The Arizona sunk after a bomb detonated in one of her powder magazines, effectively destroying the forward part of the ship.

The USS Utah, a Florida-class battleship, was also sunk by the Japanese on December 7. Her wreckage is marked on the opposite side of Ford Island at berth F11. Utah was moored where Japanese pilots expected to find the American aircraft carriers that morning. Nonetheless, six torpedo bombers attacked Utah, with two torpedoes striking the battleship. She quickly began to flood and soon began listing to port. Within minutes, Utah rolled over onto her side and the capsized. An effort was made to right her, just as the USS Oklahoma had been, but when she was righted, she did not grip the harbor bottom and soon capsized yet again. She also remains in Pearl Harbor with part of her hull visible above water.

This map was originally drawn by 'L.W.G.' in November 1942. Based on data printed on the map, we know that it was updated eleven times, with 'L.W.G.' executing three of those updates. We are unaware of any other examples of this map either in institutional collections or in private holdings and similar maps are extremely rare.