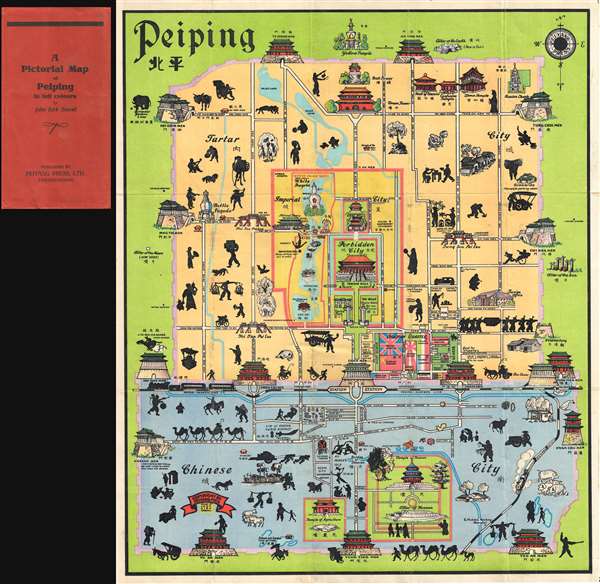 One of the two great Pre-WWII pictorial maps of Beijing.

This is John Kirk Sewall's rare c. 1928-1933 pictorial map of Beijing or Peking, China. This is one of two great pictorial maps of Beijing issued prior to World War II, the other being by Frank Dorn. The map uses color coding to divide Beijing into three sections, the Tartar City, The Chinese City, and the Imperial City (Which contains the Forbidden City. Essentially a tourist map, Sewell uses delightful whimsical imagery to illustrate important buildings, Chinese life, and other elements. Important tourist destinations are noted, including the rail station, hotels, the YMCA, and a street identified as 'good for shopping.' The legation quarter, just to the southeast of the forbidden city, features legations identified by their national flags.

This map is undated and is known to have been issued in several editions, often with variant color schemes and minor title changes. We have dated the present example to somewhere between 1928 and 1933. Peiping was first used to identify Beijing in 1928, so it must be after that date. The German Legation is identified by the by the black, red and gold Reichsbanner flag which was banned in 1933, so it must be earlier than this date. Note, there are several later editions bearing the Nazi swastika flag that were published after 1933. This example was issued by the Peiyang Press of Beijing. The OCLC identifies only 3 examples.

John Kirk Sewall (fl. c. 1928 – 1949) was an American illustrator active in China before World War II. He is also known for designing the endpapers and providing illustrations for The Chinese Festive Board, a 1935 cookbook by Corrinne Lamb. He issued at least two interesting pictorial maps of China:A Pictorial Map of Peiping and Map of the Western Hills : including a detailed description of spots of interest and roads leading to the same. Sewall was married to Janet Fitch. Learn More...


The Peiyang Press (fl. c. 1928 – 1949) was a Chinese publisher active in Tianjin and Beijing before and during World War II. The press focused on books and maps for the western traveler in China, including works in English, German, and Dutch. It is likely that the press was owned and operated by ex-pat westerners, although we have no evidence to support this theory. Among these publications were British authors Alice Leighton Cleather and Basil Crump’s English-language book Buddhism: The Science of Life (2nd ed., 1928), Robert M. Duncan’s Peiping Municipality and the Diplomatic Quarter (1933), a Chinese-Dutch dictionary (1935) and a 1937 album of black and white photographs of British military exercises in China. They also issued a detailed city plan, Map of Tientsin, with editions published in at least 1928 and 1941. They are known to have published at least two influential pictorial maps in English during the 1930s, Frank Dorn's iconic A Map and History of Peiping and John Kirk Sewall's A Pictorial Map of Peiping. Learn More...