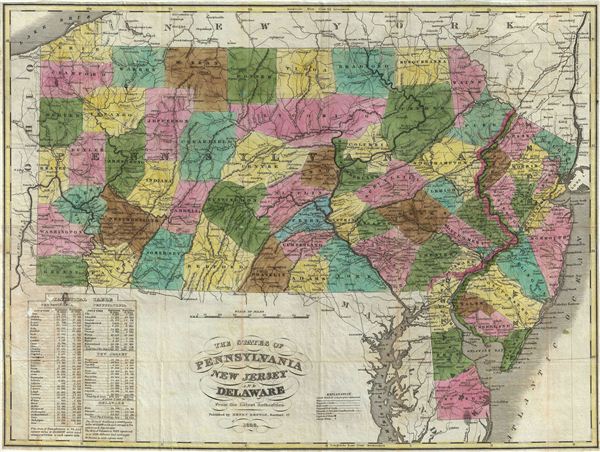 This is a beautiful example of the Henry Benton's extremely scarce 1833 pocket map of Pennsylvania, New Jersey and Delaware. Benton's map covers Pennsylvania from Lake erie eastward to Delaware and New Jersey, including adjacent parts of Maryland and neighboring New York and Ohio. In the lower left quadrant, a statistical table details population by counties in 1820 and 1830. Square mileage by state is also noted. Cartographically Benton seems to have derived this map from Anthony Finely's 1826 map of the same region as included in his New American Atlas. Published by Henry Benton, Hartford Connecticut in 1833. We have identified only two appearances of this map on the market in the last 30 years. No known examples reside in institutional collections.

Henry Benton (fl. 1824 - 1863) was an early 19th century American bookseller and publisher based in Hartford, Connecticut. Benton published several maps of Connecticut and its neighboring states though his work is exceptionally scarce. Little else is known of this elusive figure.

Very good. Original fold lines visible. Professionally flattened and backed with archival tissue. Minor loss and discoloration over table where map was joined to original binder. Binder is missing.
Looking for a high-resolution scan of this?