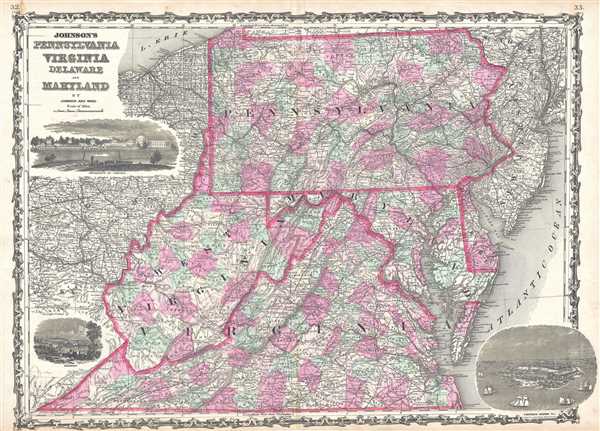 The first Johnson map to depict a partitioned Virginia.
$120.00

This is an 1863 Johnson and Ward map of Pennsylvania, Virginia, West Virginia, Delaware, and Maryland. The map depicts the region from Ohio and Kentucky to the Atlantic Ocean and from New York to North Carolina. This is the first edition of Johnson's map to depict a partitioned Virginia, as West Virginia was admitted to the Union in June of 1863. In 1861, after Virginia seceded from the Union, Unionist counties in northwestern Virginia voted to break away from Virginia and petition to join the United States. Highly detailed, myriad cities, towns, and villages are labeled, along with rivers, streams, and creeks. Roads and railroads crisscross the map, and counties are color coded for easy differentiation. Three engraved vignettes are included and depict the University of Virginia, Richmond, Virginia, and Fortress Monroe, Virginia.

This map was published in the 1863 edition of A.J. Johnson's Family Atlas.