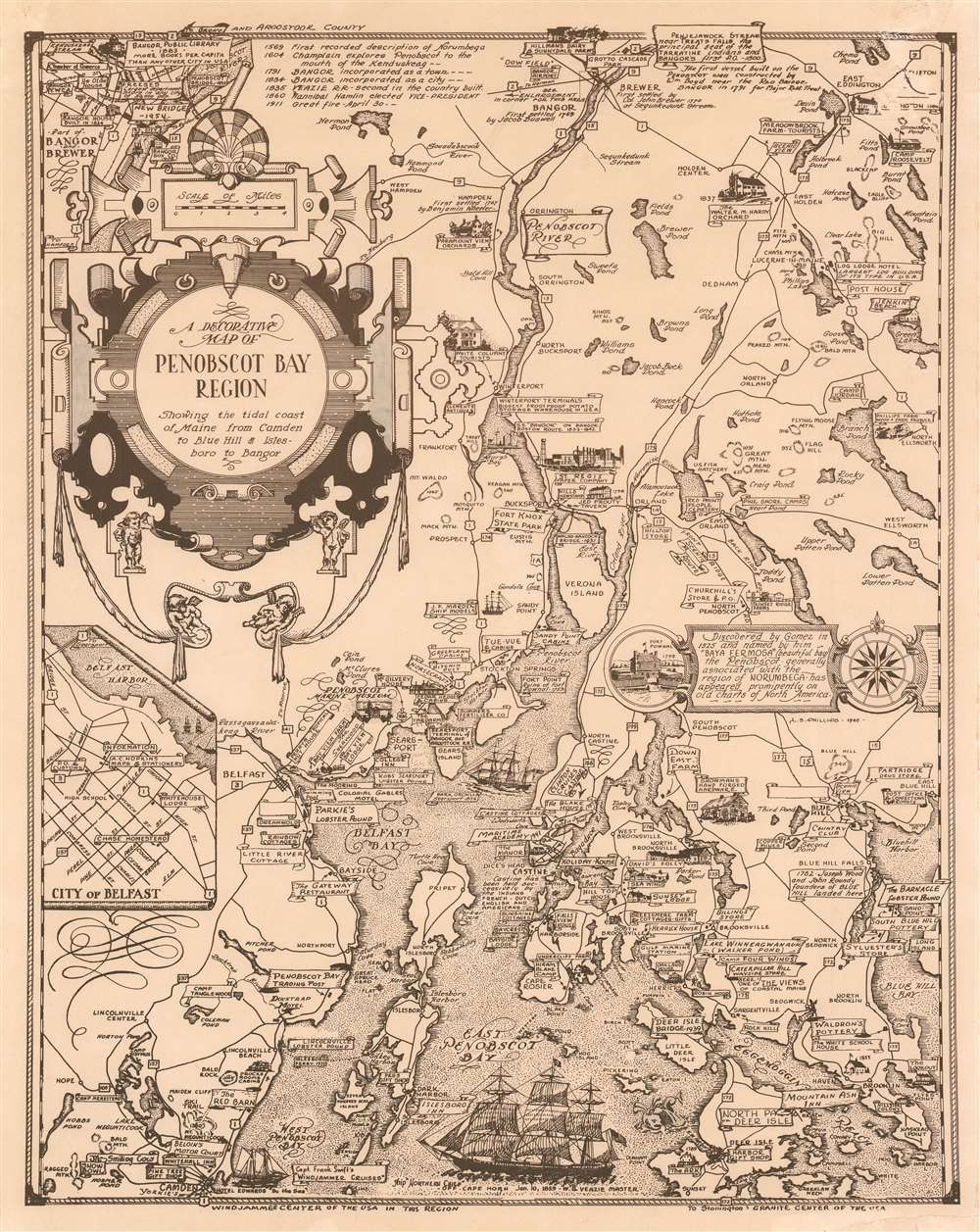 Pictorial map of the Penobscot Bay region of Maine.

This is a 1940 Luther Savage Phillips pictorial map of Penobscot Bay, Maine. The map depicts the region from Hobbs Pond and Camp Merestead to Blue Hill Bay and from Bangor to Deer Isle. Sites throughout the region are illustrated in profile with their names inscribed on banners, including the Penobscot Marine Museum, the St. Regis Paper Company, Sunset Ridge Farm, Camp Roosevelt, and the Walter M. Hardy Orchard. Other regional sites are also identified, as are important highways, rivers, and islands. An inset to the right of center illustrates Fort Pownal and is situated next to a textbox that provides a short history of Penobscot Bay which reads, ‘Discovered by Gomes in 1525 and named by him ‘Baya Fermosa’ (beautiful bay), the Penobscot - generally associated with the region of Norumbega - has appeared prominently on old charts of North America.’ A short chronological history of the region is included as well, along the top border, near an inset map of 'Part of Bangor and Brewer', while a second insert, in the lower left quadrant, details the city of Belfast. Three sailing ships are depicted in Penobscot Bay, along with a lone sea monster.

This map was created and published by Luther Savage Phillips in 1940. An example is part of the David Rumsey Map Collection but it remains uncatalogued in the OCLC. This map is rare on the private market.

Luther Savage Phillips (May 10, 1891 - 1932) was an American map maker, photographer, architect, and postcard publisher, and is arguably Maine's most significant pictorial cartographer. Born on Mount Desert Island (Acadia National Park), Maine, Phillips studied at Phillips Andover Academy before spending two years at Yale. He graduated with a Bachelor of Science degree from MIT in 1914. In October 1917 Phillips enlisted in the U.S. Navy as a Coxswain and was commissioned as an Ensign in 1918, when he was sent to the U.S. Naval Academy at Annapolis, Maryland. He was later assigned to the U.S.S. Rhode Island and sailed with the ship on a mission to Archangel on April 11, 1919. After his time in the Navy, Phillips established a successful postcard publishing business and became a well-known pictorial mapmaker. Much of his work focused on the Maine coast in the vicinity of Bar Harbor. Based in Northeast Harbor, Mount Desert Island, Maine, his company, 'Map of Maine' produced local pictorial maps for the tourist market. He would tour the state promoting and selling his work, along with his scenic postcards. After Phillips died in 1960, in Togus, Maine, his brother, Augustus Dewey Phillips (1898 - 1975) took over the map and postcard business, which was then continued by his nephew Donald Phillips (1935 - 2009). Philipps married Olympia Meimari on March 24, 1921 in Annapolis. It is unclear whether Olympia died or the couple divorced, but it is known that Phillips remarried, to Mary J. Merrill in 1935.