1839 Monin Map of the Hebrew Peoples Dispersal After the Flood 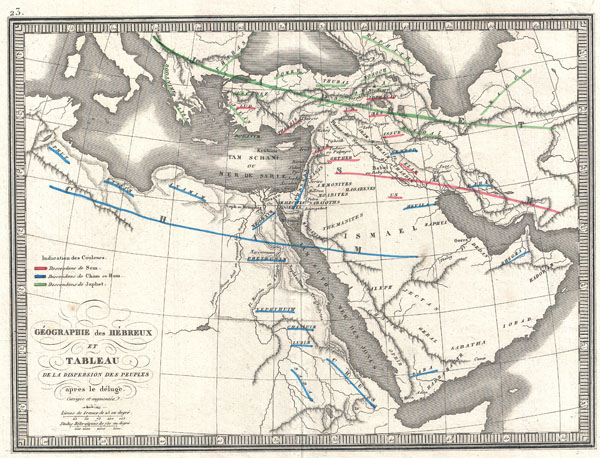 1839 Monin Map of the Hebrew Peoples Dispersal After the Flood

This is an 1839 C.V. Monin map of the Dispersal of the Hebrew Peoples After the Flood. This beautifully drawn map covers the lands occupied by the modern day countries of Turkey, Saudi Arabia, Egypt, Israel and Iraq. The travels the sons of Noah are indicated by color: the descendants of Sem (Shem) in red, the descendants of Ham in blue, and Japhet (Japheth) in green. Minor topographical detail shown, such as mountain ranges, and major cities labeled. Two scales shown in the lower left quadrant.

Charles V. Monin (1830 - 1880) was a French map publisher working the early to mid 19th century. A progressive printer, Monin was one of the first cartographic printers in Europe to take advantage of the newly discovered lithographic engraving process. His workshops in Paris and Caen, France, produced three important atlases as well as numerous independent issue maps. Monin was a member of La Sociéte de Géographie in Paris. He is known to have worked with other French map publishers including Vuillemin and Fremin. Learn More...