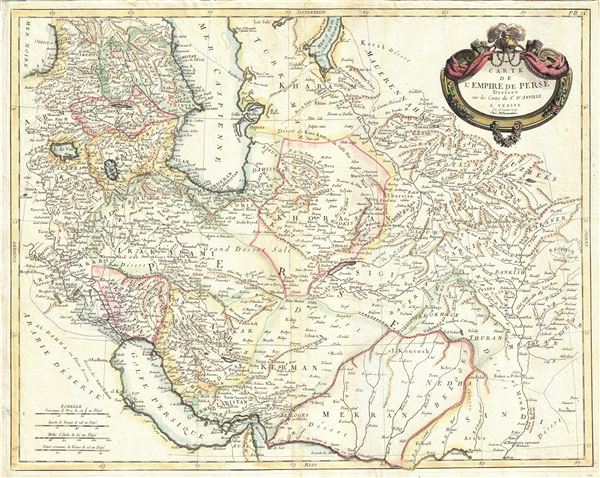 This is a beautiful example of Paolo Santini's 1779 map of Persia. It covers the Persian Empire from the Black Sea south as far as the Persian Gulf and east as far as Kashmir and Punjab in India, including the modern day nations of Iran, Iraq, Georgia, Armenia, Azerbaijan, Turkmenistan, Afghanistan, Pakistan and parts of India. The map identifies numerous towns, villages, deserts, mountain ranges, river systems and a host of other topographical features.

During this time, Persia was passing through the waning years of the short lived Zand Dynasty, which ruled from the capital city of Isfahan – identified here as Ispahan. The death of Karim Khan, the founder of the Zand Dynasty, in 1779 led to civil war. In a few short years, in 1794, Aga Muhammad Khan overthrew Loft Ali Khan, the last Shah of the Zand Dynasty, and relocated the capital to the new city of Tehran. The subsequent era, the Qajar Dynasty, witnessed numerous military conflicts with the rising powers of Imperial Russia and the loss of much of Persia's territory.

The map includes a beautifully illustrated title cartouche in the upper right quadrant. This map was based on the earlier map by Jean Baptiste D'Anville and was redrawn by P. Santini in 1779, to be included in his Atlas Universel dressee sur les Meilleures Cartes Modernes.