1750 Lotter Map of Persia, the Caspian Sea, and the Caucasus 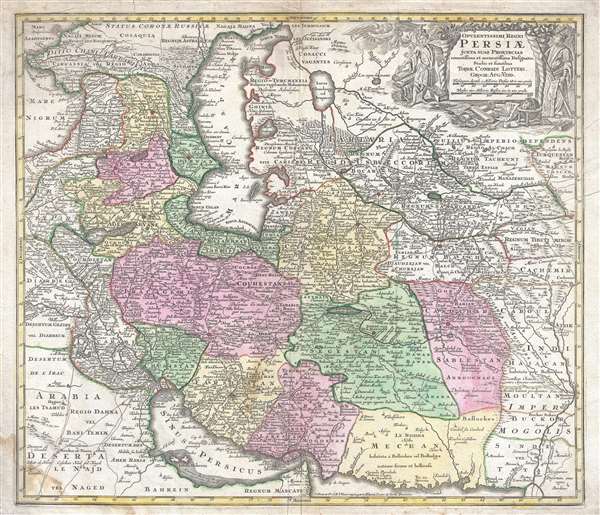 1750 Lotter Map of Persia, the Caspian Sea, and the Caucasus

Details the extensive road network in the region, connecting Baghdad to Kabul.

This is a scarce c. 1750 Tobias Conrad Lotter map of Persia, the Caspian Sea, and the Caucasus. The map depicts the region from the Black Sea to Kashmir and the Indus River and from the Sea of Azov and the Caspian Sea to the Persian Gulf, the Strait of Hormuz, and the Gulf of Oman. Incredibly detailed, myriad cities, towns, and villages are labeled, including Baghdad, Isfahan, Kandahar, and Kabul. Rivers are illustrated and labeled throughout the region, including the Indus, Tigris, and Euphrates. The extensive road network is also depicted, connecting settlements from one end of the map with ones on the other. A decorative title cartouche is situated in the upper right corner.

This was a very volatile era in the history of Persia, with Peter the Great, the Czar of Russia, launching the Russo-Persian War in 1722 and capturing a large portion of Iran's territory in the Caucasus. Also, in 1722, an Afghan army invaded Iran and laid siege to Isfahan, eventually taking the city. By the 1740s, a new Iranian warlord, Nader Shah, had defeated the Afghans and the Ottomans and negotiated the Russian withdrawal from the Caucasus. He had also restored the monarchy. Nader was made King of Iran in 1736. His empire would eventually include most of the Caucasus and stretch to Pakistan and the Persian Gulf.

This map was produced by Tobias Conrad Lotter c. 1750.