1719 Chatelain Map of the Empires of Turkey and Persia 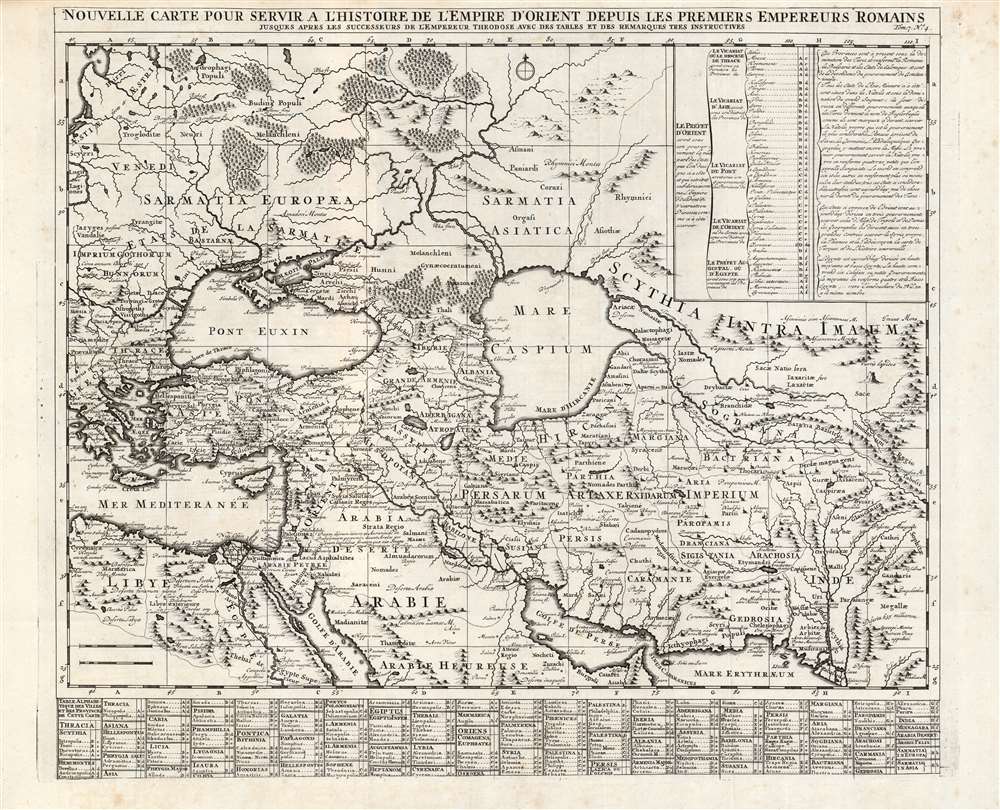 1719 Chatelain Map of the Empires of Turkey and Persia

A superbly engraved 1719 Chatelain map of the Middle and Near East, presenting the ancient cities and kingdoms of those regions in the time of the Persian Empire and early Roman Empire. It spans from the eastern Mediterranean to the mouth of the Indus River. It centers on the Black and Caspian Seas, and embraces from the Persian Gulf to the full course of the Volga River. The map applies what was state-of-the-art geographical information to the place names of antiquity, thus placing the ancient eastern world in a more understandable context. The map shows ancient administrative divisions, regional names, major cities, towns and forts. Mountains and forests are shown pictorially. Extensive tables - one listing cities and towns, the other listing the prefectures and Dioceses at that time under the dominion of the Ottoman Empire - use a coordinate system to aid in finding the listed places on the map itself. The map was included in Chatelain's seven-volume historical atlas of the world, one of the largest and broadest Dutch encyclopedias of the early eighteenth century. In addition to its geographical information, it was a treasure trove of historical, political and even genealogical information. Chatelain's maps drew on the work of his day's finest geographers, including De l'Isle and De Fer.

Chatelain’s Atlas Historique was published between 1705 and 1720; this map appeared in volume six, published in 1719. The Atlas Historique is well represented in OCLC, although this separate map is catalogued in only six institutional collections. The map appears in dealers' catalogues from time to time.

Excellent, with a bold strike. Top margin close but not impacting border, else fine.