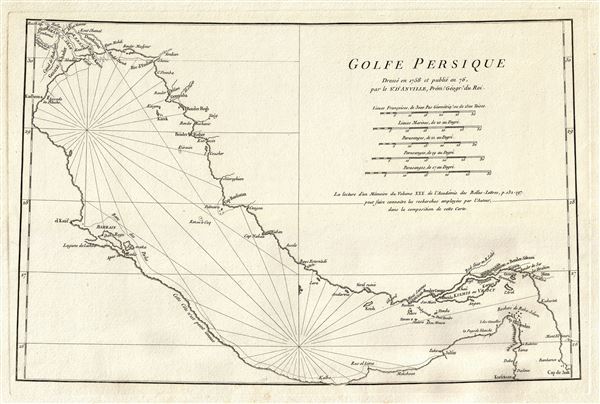 A scarce 1776 map of the Persian Gulf by Jean Baptiste Bourguignon d'Anville. Essentially a nautical chart, this map covers from Basrah to the Straits of Hormuz. D'Anville prepared this map in 1758 to illustrate a lecture presented to the Paris Academie des Belles-Lettres regarding his speculations on the then little known geography of the Persian Gulf. Although the southwestern part of the Gulf is poorly mapped and little known, various Gulf cities are identified including Julfar (Ras al-Kahaimah), Mekehoan, Kalba, and Ras-ol Lima. The Qatar Peninsula is entirely absent, but the island of Bahrain is noted, though misaligned. The Saudi city of Qatif (el Katif) is however clearly identified. D'Anville was able to draw from Persian sources to map the northeastern shore of the Gulf and there the cartography is notably superior. D'Anville's sources for this map as well as his speculations are recorded in the La lecture d'un Memoire du Volume XXX, de l'Academie des Belles-Lettres, p. 132-197.