1867 Weyss Map of the Civil War Siege of Petersburg, Virginia 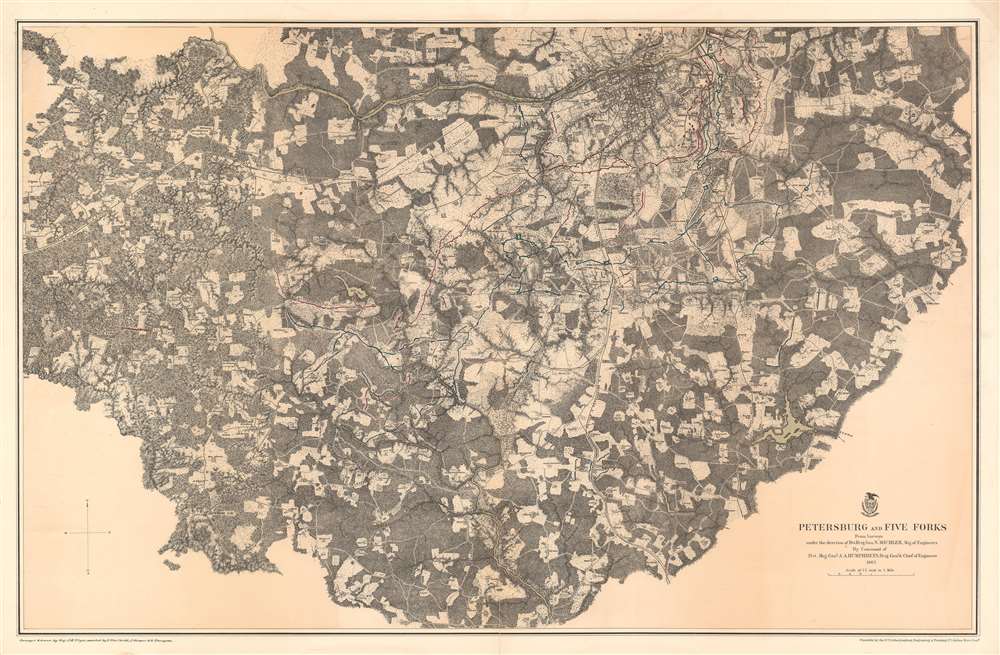 1867 Weyss Map of the Civil War Siege of Petersburg, Virginia

A detailed look at the Siege of Petersburg including the Battle of Five Forks, a key victory in forcing the surrender of the Army of Northern Virginia by Robert E. Lee.

This is an 1867 John Weyss and Nathaniel Michler map of Petersburg and Five Forks, Virginia illustrating the Siege of Petersburg during the American Civil War (1862 - 1865). The map depicts the region from Five Forks to Prince George Court House and from the river road north of the Appomattox River to Malone's Bridge on Rowanty Creek.

The Siege of Petersburg and the American Civil War

The site of the climactic campaign of the American Civil War (but not the final battle), the city of Petersburg, Virginia is situated near the top border to the right of center. Concentric circles of Confederate and Union trenches are illustrated to the south and east of the city, though the lines stretch far to the south and west as well. A series of trenches and forts uncannily similar to those made infamous during the fighting on the Western Front in World War I, positions changed hands regularly, as General Ulysses S. Grant and the Union Army tried to force the Confederate soldiers into surrendering. Union troops made an effort to cut all supply lines into the city, which served as the principal supply hub for the Confederate capital of Richmond, Virginia, just over twenty miles to the north. Large battles and small skirmishes happened regularly, and Union forces bombarded Petersburg on a nearly daily basis. One such battle occurred on March 25, 1865, when Confederate troops attacked the Union position at Fort Stedman (illustrated here) east of Petersburg. The Confederates initially drove the Union troops from the fort and three adjacent batteries, but the Union army immediately counterattacked and sent the Confederates retreating back into Petersburg.

The Battle of Five Forks took place on April 1, 1865, at the end of the Siege of Petersburg and within days of the end of the American Civil War. Union cavalry commanded by Major General Philip Sheridan attacked and defeated a Confederate force led by Major General George Pickett. This victory seized the vital intersection at Five Forks, which was key to controlling the South Side Railroad, an important supply and evacuation route from Richmond, where the Confederate government was entrenched. This victory directly led to Confederate General Robert E. Lee's decision to abandon Richmond and Petersburg and retreat west, in an attempt to make contact with General Joseph Johnston's army in North Carolina, making the Union victory at Five Forks a critical step toward forcing the surrender of Lee and the Army of Northern Virginia eight days later at Appomattox Court House.

This map was surveyed and drawn by Major John E. Weyss under the command of Nathaniel Michler, engraved by Julius Bien, and published by the War Department in Military Maps illustrating the Operations of the Armies of the Potomac and James in 1869. While this map is well represented in institutional collections, it is rare on the private market.