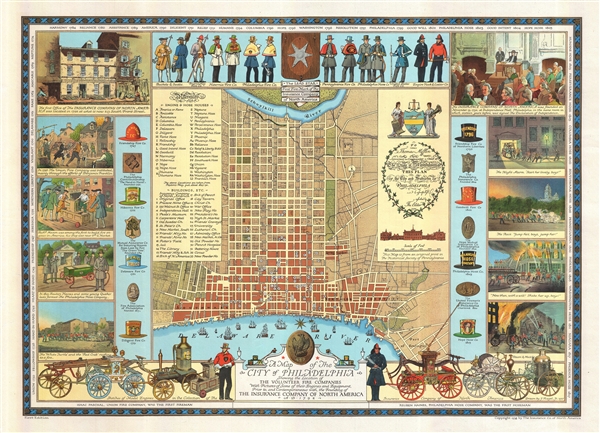 An impressive first edition 1938 pictorial map of the city of Philadelphia illustrating that city's historic volunteer fire departments. Based upon a 1937 drawing by Jacob Riegel, the map focuses on the downtown area of modern Philadelphia between the Delaware River and the Schuylkill River. The map itself is derived from a historic map dating to 1794. Riegel has identified the sites of various Engine and Hose Houses as well as other important buildings. Surrounding the map there are illustrations of the various fire companies at work, including renderings of their costumes and logos. Along the bottom of the map there are sketches of historic fire engines, apparently all drawn from models in the collection of the Insurance Company of America, who commissioned this map. This map is identified in the lower left corner as a 'first edition' but it seems likely that this is in fact the only edition.

Jacob Riegel Jr. (October 26, 1889 – June 13, 1959) was an artist known for his pictorial maps. Riegel was born in Philadelphia. Like his father before him he attended Princeton University from which he graduated in 1912. During World War I, Riegel joined the Army Sanitary Corps, and after basic training at Fort McPherson, was sent abroad with the rank of Sergeant. In 1916 he joined the art department at the Philadelphia lithography and printing firm of John Louis Ketterlinus and Company. Riegel produced artwork for greeting cards, book plates, armorial crests, and of course, pictorial maps. HIs art became quite popular, enough that c. 1930, he contracted the Engle Press of Philadelphia to reproduce his work upon request. Riegel lived at 6003 Wayne Avenue, and later at 55 Schoolhouse Lane, both in Germantown, PA. He is interred at Laurel Hill Cemetery in Philadelphia PA. Learn More...