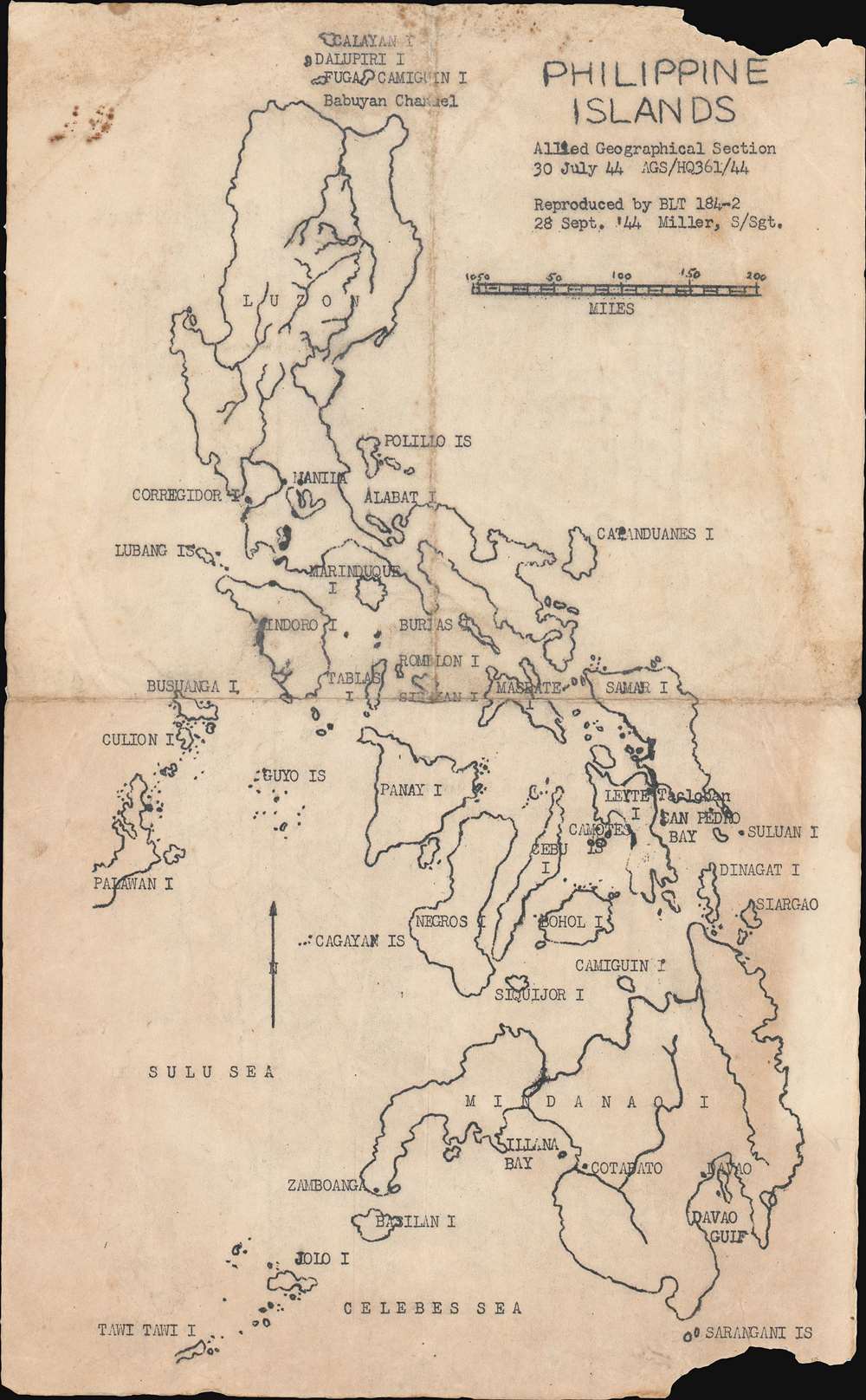 Used by Battalion Landing Team 184-2 in preparation for the Battle of Leyte in the Philippines.
$1,500.00

This is a 1944 Allied Geographical Section mimeograph map of the Philippines. Created for the planning and preparation of the Philippine Campaign, the map is dated twice: once for its publication by the Allied Geographical Section (30 July 44) and a second time when it was reproduced by Battalion Landing Team (BLT) 184-2 (28 Sept. '44), less than a month before the amphibious invasion of the island of Leyte on October 20, 1944. The landings on Leyte marked the beginning of the Philippine Campaign, which lasted until the war ended on September 2, 1945. Each of the islands is labeled, as are a few cities, including Manila on Luzon and Davao on Mindanao, but very little other detail is present.

Since this map was originally produced by the Allied Geographical Section, it can be surmised that it was meant to be part of the planning process for the Leyte operation. The present example, which was 'reproduced' by a staff sergeant in BLT 184-2, on September 28, 1944 must have helped in preparing the men of this unit for the assault on Leyte. It is of note that this map is a mimeograph, a short-run printing technique used widely for field reproductions of important document during wartime.

This map was originally created by the Allied Geographical Section on July 30, 1944 and then was reproduced for use by BLT 184-2 on September 28, 1944. This is the only known example.

The Allied Geographical Section (AGS) (1942 - 1945) was formed after a series of directives was issued by General Douglas MacArthur's headquarters that called for the formation of a task force to compile all available geographical intelligence on the largely unmapped and unexplored south-west Pacific area. The AGS produced three different types of publications: Special Reports, Terrain Handbooks, and Terrain Studies. The most complex of these were the Terrain Studies, which were designed to provide the most comprehensive information available. These studies included diagrams, text, photographs, and maps of varying size and detail. All these reports were produced for planning and operational staffs. Learn More...

Good. Exhibits some toning and soiling. Closed tear extending one half inch into printed area from bottom margin professionally repaired on verso. Verso repairs to fold separations. Blank on verso.