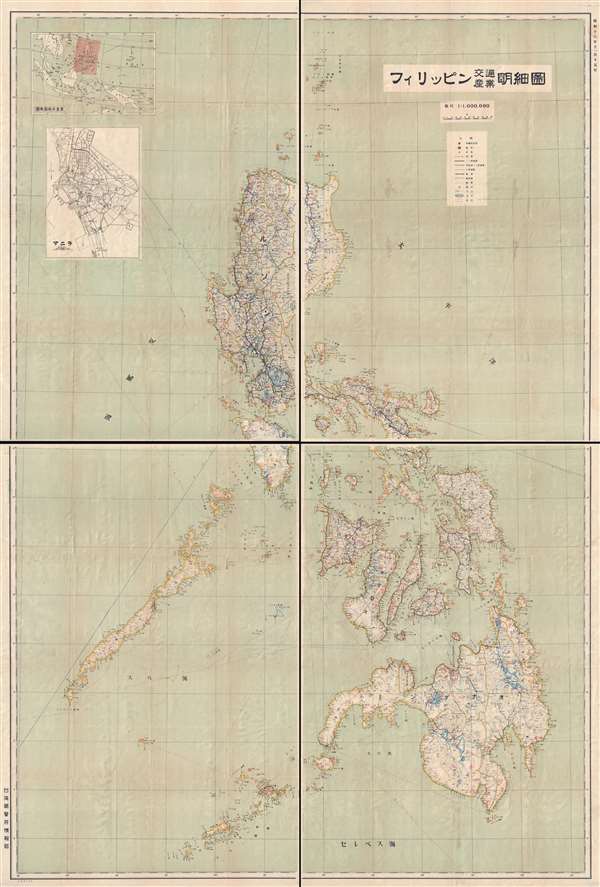 The focus of the map is the Philippine transportation network. The level of detail evident in this map illustrates the extreme interest the Japanese had in the Philippines, not only as a source of personnel and resources, but as a steppingstone to Southeast Asia and Melanesia.

The publication of this map coincided with the November 5, 1941 formation of Taiwan-based Southern Expeditionary Army (南方軍), under by Gen. Count Hisaichi Terauchi (寺内 寿一; 1879 - 1946), formerly War Minister. His orders from Imperial General Headquarters were to prepare for an invasion of the Philippines in the event that negotiations with the United States failed - which they did. Plans for an invasion of the Philippines were finalized on November 13 - 15, by Lt. General Masaharu Homma (本間 雅晴; 1887 - 1946), Lt. General Hideyoshi Obata (小畑 英良; 1890 - 1944), Vice Admiral Ibō Takahashi (高橋 伊望; 1888 - 1947) and Vice Admiral Nishizo Tsukahara (原 二四三; 1887 - 1966). The publication of this map at that same day, November 15, can be no mistake.

Taiwan Times (January 8, 1919 – March, 1945) was a government issued Japanese newspaper published in Taiwan from 1919 – 1945. There were three publications that bore the name Taiwan Times, each was very different, and they are considered separate publications, but in fact, each succeeds its predecessor. First was the Taiwan Association Newspaper, which was published from 1898 to 1907. In Meiji 40 (1907) the defunct publication was taken over by the Taiwan branch of the Toya Association, which published as the Taiwan Times until 1919. In that year, it was taken over by the Taiwan Governor's Office (台湾總督府情報部), for which it was a propaganda tool for the Japanese Imperial Government. The newspaper focused on government and military affairs, the war progress, and general issued associated with the South China Sea region. It is considered the longest-lived and most far-reaching periodical issued during the Japanese occupation. Learn More...