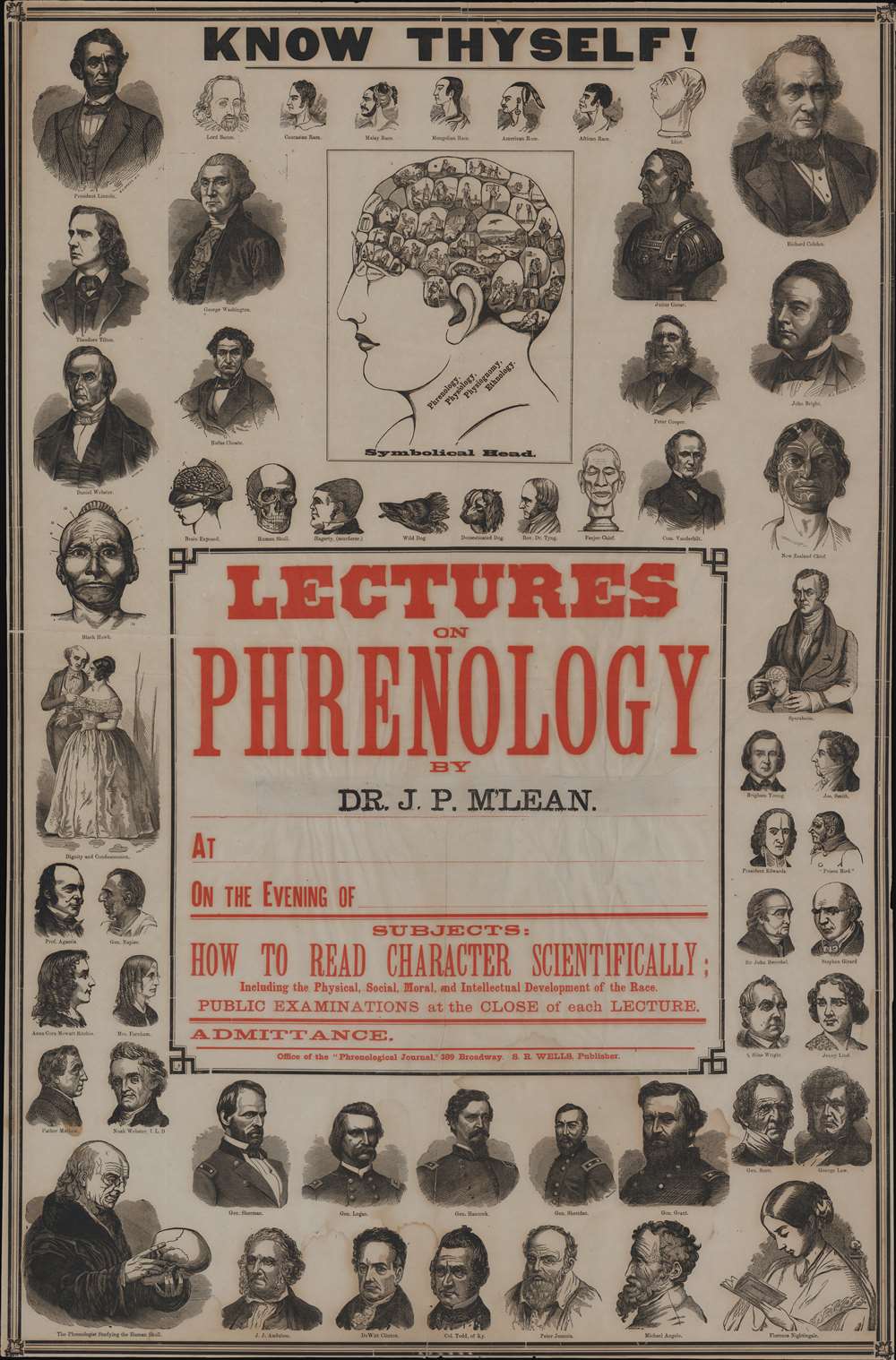 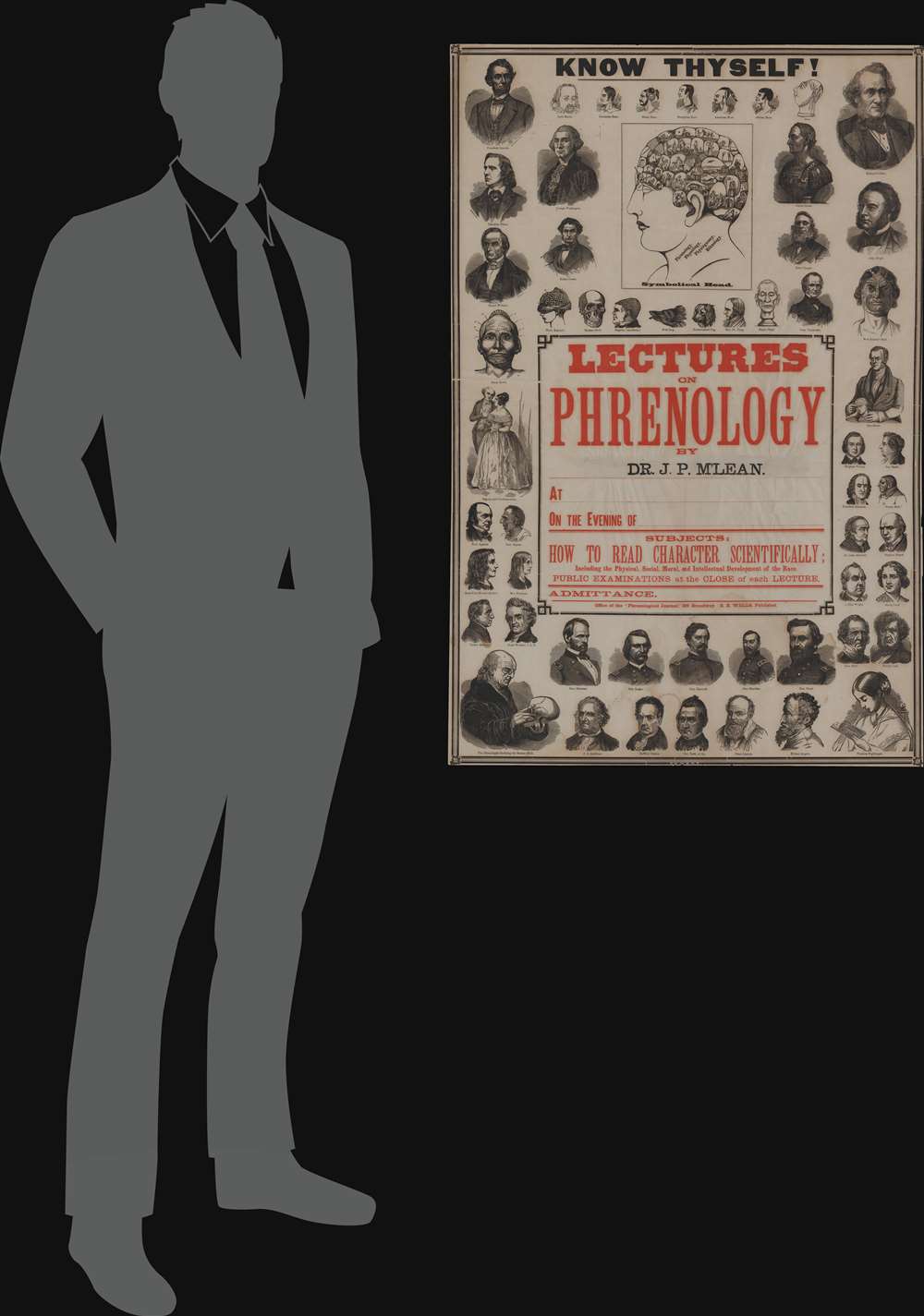 This is an uncommon c. 1865 promotional broadside advertising a lecture by the itinerant mesmerist and phrenologist J. P. M'Lean (MacLean). The broadside focuses on the 'Symbolical Head' offering the classic phrenological brain map, divided into modules representing faculties, which contain images of the postulated functions. Below the 'Symbolical Head' a framed area with red type advertises lectures by Dr. J. P. M'Lean, an associate of the Aberdeen Phrenological Society. Surrounding the advertisement are 56 illustrations of differently shaped heads, many of which are drawn from previous illustrations present in phrenological books published by Fowler and Wells. Lectures were on such subjects as 'How to Read Character Scientifically' and would be followed by 'Public Examinations,' presumably conducted by M'Lean.

The Pseudoscience of Phrenology

Phrenology was a pseudoscience that suggested one might determine an individual's moral character, intelligence, and more through detailed measurements of the shape the head. Phrenologists argued that certain areas of the brain were devoted to specific functions and behavioral patterns. For example, it was believed that 'love of offspring' or 'philioprogenitiveness,' was located at the back of the head, so, if this region were larger, the individual might have a greater likelihood to be a loving parent.

American Phrenology in the 19th Century

The study of phrenology was initially developed by the German scientist Franz Josef Gall (1758 - 1828), but did not become exceptionally popular until the early 19th century. The primary American proponents of Phrenology were the brothers Lorenzo Niles Fowler (1811 - 1896) and Orson Squire Fowler (1809 - 1887). Lorenzo moved to England where he established the L. N. Fowler and Co. phrenological publishing house. Orson partnered with brother-in-law Samuel Roberts Wells (1820 - 1875), the publisher of this broadsheet, establishing their own New York based phrenological publishing firm, Fowler and Wells. They also published the American Phrenological Journal from roughly 1839 to 1901.

Curiously, the present broadsheet identifies S. R. Wells as the publisher, making no note of Fowler, suggesting that this was published after the Fowler brothers left Fowler and Wells in 1855. The Fowler Brothers left the firm in the hands of Samuel Roberts Wells, but it was probably managed by Charlotte Fowler Wells (1814 - 1901), the wife of Samuel Roberts and sister of Lorenzo and Orsen. The broadside is undated but based upon the history of the firm, we believe it must date to the 1860s.

This broadside is rare. The OCLC records copies at the University of Delaware, the Cincinnati Historical Library, and the Library Company of Philadelphia, the record describing the line for the lecturer’s name as blank.

Samuel Robert Wells (1820 - April 13, 1875) was an American phrenologist and publisher active in the middle part of the 19th century. Wells was born in West Hartford, Connecticut, the son of Russell Wells of Farmington, Connecticut. Wells initially studied to be a physician in Boston. There he was impressed by several Boston lectures by phrenology evangelists Lorenzo Niles Fowler (1811 - 1896) and Orson Squire Fowler (1809 - 1887). He was particularly inspired by a phrenological chart laid out by Charlotte Fowler, then but a teenager. Wells became an eager disciple to the Fowler Brothers and joined their New York firm in 1843, at which point the name was changed to Fowler and Wells. A year later, in October of 1844, Charlotte and Samuel married. When Lorenzo Fowler moved to England in 1855, much of the firm's ownership passed to Wells. Along with Charlotte, Wells published the American Phrenological Journal from about 1839. When Wells himself died in April of 1875, Charlotte became the sole owner. She incorporated as Fowler and Wells Company in 1884 and continued to promote phrenological pseudoscience until her own death in 1901. Learn More...