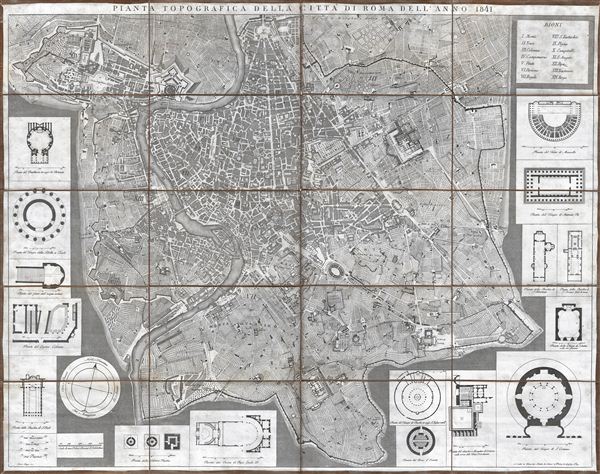 This is a fine 1841 topographical map or plan of Rome, Italy drawn by Pietro Ruga. Covers the walled center of Rome in incredible detail, reveling individual streets, buildings, parks, piazzas, temples, ancient ruins, and ecclesiastical centers. The map proper is surrounded by architectural illustrations of many of Roma's most important buildings, including the Teatro de Macello, the Tempio de Antonino Pio, the Templo di St. Constanza, the Pantheon, and many others. Prepared for the tourist trade, this map was dissected and mounted on linen in 20 panels. Folds into its original blue marbled cover, entitled, 'Roma Moderne.'

Pietro Ruga (c. 1772 - 1850) was an Italian engraver, printmaker, furniture designer, and architectural draftsman active in Rome during the late 18th and early 19th centuries. Ruga was born in Rome, Italy. He is best known today for his architectural views of Italian, in particular Roman, monuments, furnishings, and antiquities. There are only two maps attributed to Ruga, both tourist pocket plans of Rome, dating to the 1820s. Pietro Ruga the engraver should not be confused with Pietro Ruga Romano, who lived in Rome at the same time and taught civil law at the Sapienza. Learn More...

Very good condition. Some verso reinforcement on vertical centerfold. Dissected and mounted on linen in 20 sections.
Looking for a high-resolution scan of this?