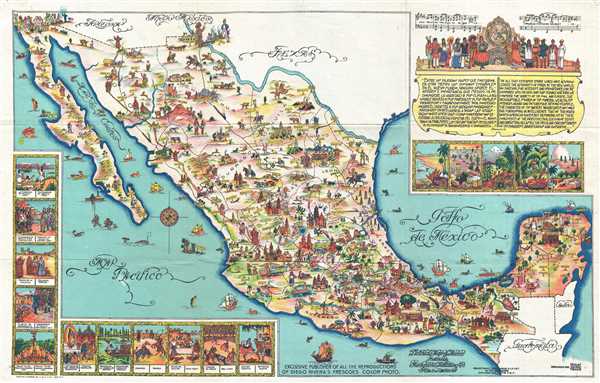 A pictorial overview of Mexican life, history, and culture from the most prominent Mexican pictorial map artist!
$350.00

This is a 1931 Miguel Gomez Medina pictorial map of Mexico. The map depicts all of Mexico from the southern United States (labeling Arizona, New Mexico, and Texas) to the Belize, Guatemala, and the Pacific Ocean and from the Pacific Ocean and Baja California to the Gulf of Mexico. Wonderfully composed, countless tiny cartoon vignettes illustrate Mexican life, history, and culture. Numerous cities are labeled, including Mexico City, Chihuahua, Oaxaca, Ciudad Juarez, and Tijuana, among others. The modern tourist haven of Cozumel Island is also illustrated. Chichén Itzá, the astounding Mayan ruin in the Yucatan is illustrated in profile. At the U.S.-Mexico border, Uncle Sam appears El Paso, Texas, on one end of a bridge a bridge, while a good natured Mexican citizen offers what is possibly a bottle of tequila, from the Mexican side of the river. In the ocean, numerous fish and other sea creatures are illustrated, along with various ships.

Several vignettes are situated along the left and bottom border, illustrating aspects of Mexican history and culture. Each of the vignettes is captioned in both Spanish and English and features scenes of the founding of Mexico, the conquest of Mexico by Cortes, Mexican independence, and cultural events such as a rodeo, a bull-fight, and the national dance. A cartouche in the upper right corner contains a quote from William Prescott stating the splendor and unequaled importance of Mexico to the Spanish empire. Below the quote are five beautifully drawn landscapes.

This map was created in 1931 by Miguel Gomez Medina, the best known Mexican artist creating pictorial maps, and published by Fischgrund Publishing Company. There are at least two editions of this map, the present medium format example, and another larger format edition.