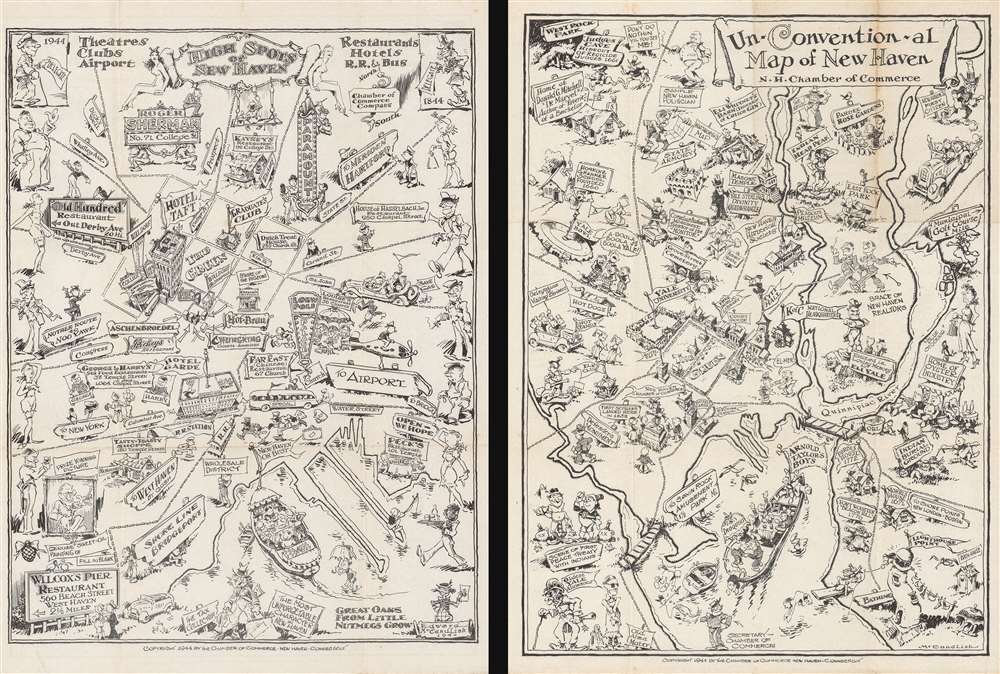 Features a previously unknown pictorial map of New Haven by the artist behind the Bootlegger's Map of America.
$1,000.00

This is an extremely rare 1944 Edward McCandlish and New Haven Chamber of Commerce double-sided pictorial map of New Haven, Connecticut, featuring a an extremely-rare and essentially unknown work by the celebrated artist of the Bootlegger's Map of the United States. This piece is made up of two different pictorial maps of New Haven, one on the recto and one on the verso, each map illustrates sites around New Haven in black and white in McCandlish's signature style. Known for his Bootlegger's Map of the United States, McCandlish only produced three known pictorial maps during his career, the previously mentioned Bootlegger's Map, a Ration Map of the United States, and the Un-Convention-al Map of New Haven, offered here. The only record of the existence of the second map offered here (printed on the verso), High Spots of New Haven, that we have been able to identify is a reference in the Library of Congress Copyright Offices 'Catalog of Copyright Entries' from 1944.

The Un-Convention-al Map of New Haven

The Un-Convention-al Map of New Haven highlights life in New Haven both associated with Yale University and with the community as a whole. The Green and Yale University are situated just to the left of center, while the 'Yale Divinity Quadwrangle', a statue 'Erected in Loving Memory of Eli Yale', and the 'Yale Bowl' are both noted further away from campus. Eli Whitney's Barn, the New Haven Historical Society, and Grove Street Cemetery are also prominently marked. West Rock Park and East Rock Park are easily found, while the masonic temple, the Knights of Columbus headquarters, and a car full of visiting Elks are also marked. New Haven's history, including the first settlers to land there and the first peace treaty with the Indians, are also commemorated in a slightly mocking tone.

High Spots of New Haven focuses on the city's many restaurants, bars, theaters, and hotels. Each is marked by a sign. Some, like the Paramount, the Roger Sherman, and the Loew Poli Palace, appear to be electrified, while others, like the Tasty-Toasty Shoppe, are simply nailed to a stake. New Haven's high society are illustrated along the left and right borders, lending an air of both class and the mocking of high social status to the work. Signs direct the way to places outside the depicted area, including the airport, several restaurants, and, of course, New York City and Hartford. Unlike in the Un-Convention-al Map of New Haven, streets are labeled on this map, allowing a viewer not immediately familiar with the city to have some idea of where everything actually is located.

Both of these maps are extremely rare. Only two institutions, Yale University and the University of Illinois at Urbana-Champaign, have examples of the Un-Convention-al Map of New Haven in their collections and we have not located another instance of this map entering the private market. The High Spots of New Haven map does not appear in the OCLC and we can find instances of it being offered on the market. As stated above, the only record of this map we have been able to locate is in the Library of Congress Copyright Offices 'Catalog of Copyright Entries' from 1944. Both maps were drawn by Edward McCandlish and published by the Chamber of Commerce of New Haven, Connecticut, in 1944.

Edward Gerstell McCandlish (March 10, 1887 - December 4, 1946) was an American artist, craftsman, toy-maker, and jack-of-all-trades. Born in Piedmont, West Virginia to Upton Beall McCandlish (1848 - 1915) and Margaret Lindsay Landstreet McCandlish (1855 - 1919), not much is known about McCandlish's childhood. He attended Maryland Agricultural College, the Philadelphia Academy of Fine Arts, and another professional art school in Baltimore. It is said that, early in his life, McCandlish worked as a sailor, lumberjack, and highway laborer. He established himself as a toy-maker in Piedmont and Hancock, West Virginia in the years leading up to World War I. However, by June 1917 when he was drafted into the 116th Engineers in the U.S. Army, he had moved to Baltimore, Maryland and was working as a painter at a local steel works. McCandlish spent most of his time with the Allied Expeditionary Force (A.E.F.) in France working on camouflage (which was hand-painted at the time) and in painting sets for A.E.F. theatre productions. After returning to the U.S., he began teaching art to wounded and disabled veterans at St. Elizabeth's Hospital in Washington, D.C., and was also active in the American Legion Veterans' Organization. After a move to Staten Island, New York, McCandlish and his wife Maybelle Bowen (1899 - 1973), whom he married in July 1919, moved to Stonington, Connecticut, where McCandlish established a new toy company, the Character Toy Guild of Stonington. He received copyrights on several of his new toys in June 1920. During the 1920s and 1930s, McCandlish worked as a cartoonist, illustrator, and children's columnist for the Detroit Free Press and the Washington Post, during which time he and his family lived in Northville and Ann Arbor, Michigan. By 1940, the McCandlish family (which now included seven children) had moved to Van Wert, Ohio, and would soon move to Geneva, New York. While in Geneva, in April 1941, McCandlish received a patent for a new roller skate design. By October 1942, McCandlish had elected to forego life as a commercial artist and instead took a job working at one of Curtiss-Wright's aircraft factories in Buffalo, New York. By early 1945, McCandlish had again moved on, after accepting the position of promotion director of the radio station WHEB in Portsmouth New Hampshire, a position he held until August 1945, when he resigned to form a new company, Allied Arts Inc. He died suddenly on December 4, 1946 near North Brookfield, Massachusetts, and was buried at Arlington National Cemetery.