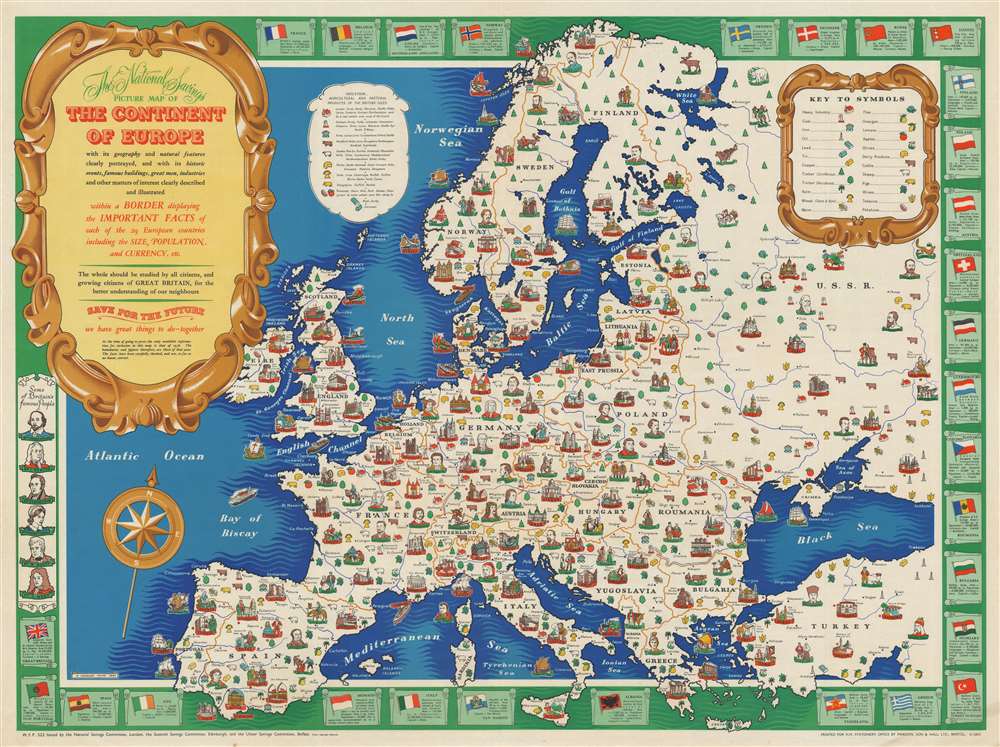 Includes portraits of such luminaries as Voltaire, Mozart, Dante, and Tolstoy.
$400.00

The National Savings Picture Map of the Continent of Europe with its geography and natural features clearly portrayed,and with its historic events, famous buildings, great men, industries and other matters of interest clearly described and illustrated within a Border displayong the Important Facts of each of the 29 European countries including the Size, Population, and Currency, etc.
1945 (dated)    29 x 39 in (73.66 x 99.06 cm)     1 : 5500000

This is a 1945 H. Charles Paine and National Savings pictorial map of Europe. The map depicts the continent from the Atlantic Ocean to Turkey and the Soviet Union and from Norway to Gibraltar, Sicily, and Crete. Created 'for the better understanding of our neighbors', cities throughout the continent are identified by a profile view of one of each city's most well-known landmarks and labeled by black block lettering 'stitched' on a red banner. Some of these, from a modern standpoint, are surprising, particularly Paris, which is embodied by the Arc de Triomphe, and London, which is marked by the Tower of London. Many cities are highlighted by their cathedral, including Amiens, Nantes, Milan, Cologne, Brussels, Prague, and St. Petersburg. Istanbul is marked by a view of the Hagia Sophia. Smaller cities are also labeled but are in a much less obvious font. The Continent's people and luminaries are illustrated as well, with portraits of such noted figures as Voltaire, Goya, Rembrandt, Beethoven, Chopin, Copernicus, Lenin, Tolstoy, and Genghis Khan. Sketches of Czechs, Croatians, Bretons, Basques, Albanians, and Turks are also included. The whole is bordered by illustrations of each nation's flag and information concerning their area, population, and currency. Portraits of a few famous British citizens are also included in the border, including Newton, Shakespeare, and Florence Nightingale.

National Savings, now known as National Savings and Investment, is a state-owned savings bank in the United Kingdom. Founded in 1861 as the Post Office Savings Bank, the bank was founded as a means for ordinary workers to save money in order to protect themselves for hard times and to provide the government with debt funding. During World War I, the British government launched the National Savings Movement, which was a mass savings movement that encouraged citizens to help support the war effort and pay government debts. The movement was instrumental during World War II and continued on into peacetime to provide people with an easy and safe way to save small sums of money. The program was discontinued in the late 1970s due to lack of interest on the part of the government and the banking industry.

This map was created by H. Charles Paine and published by National Savings in 1945. The OCLC records one example which is part of the collection at the Library of Congress and it is rare on the private market.