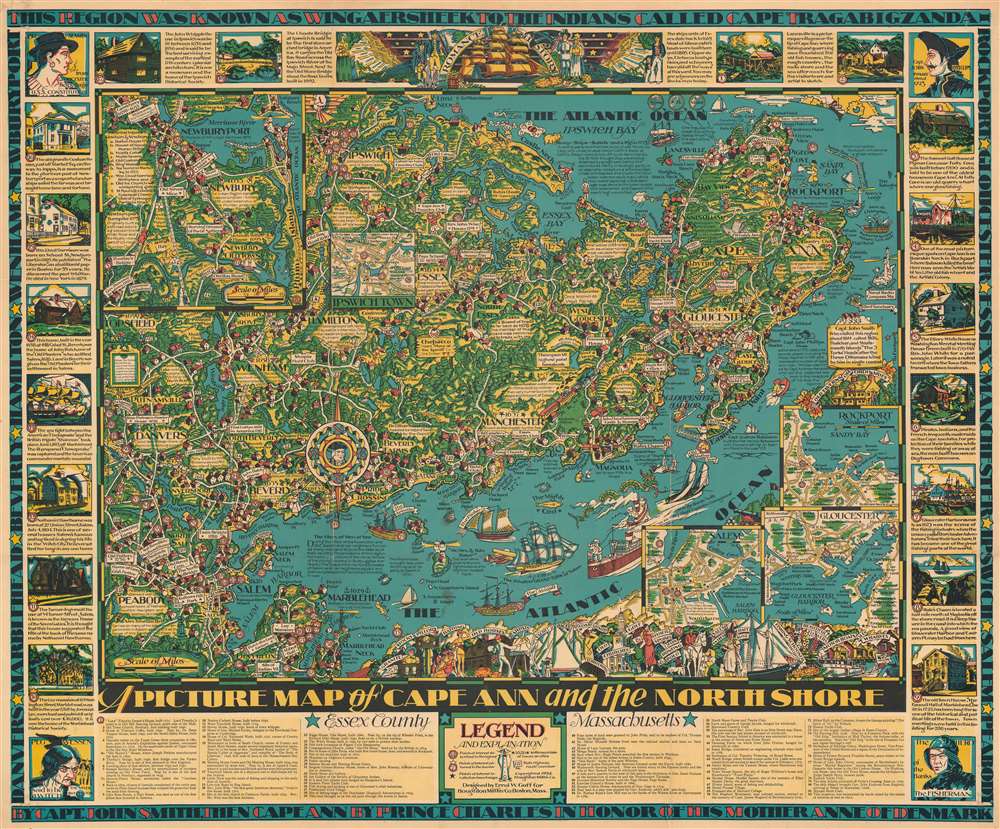 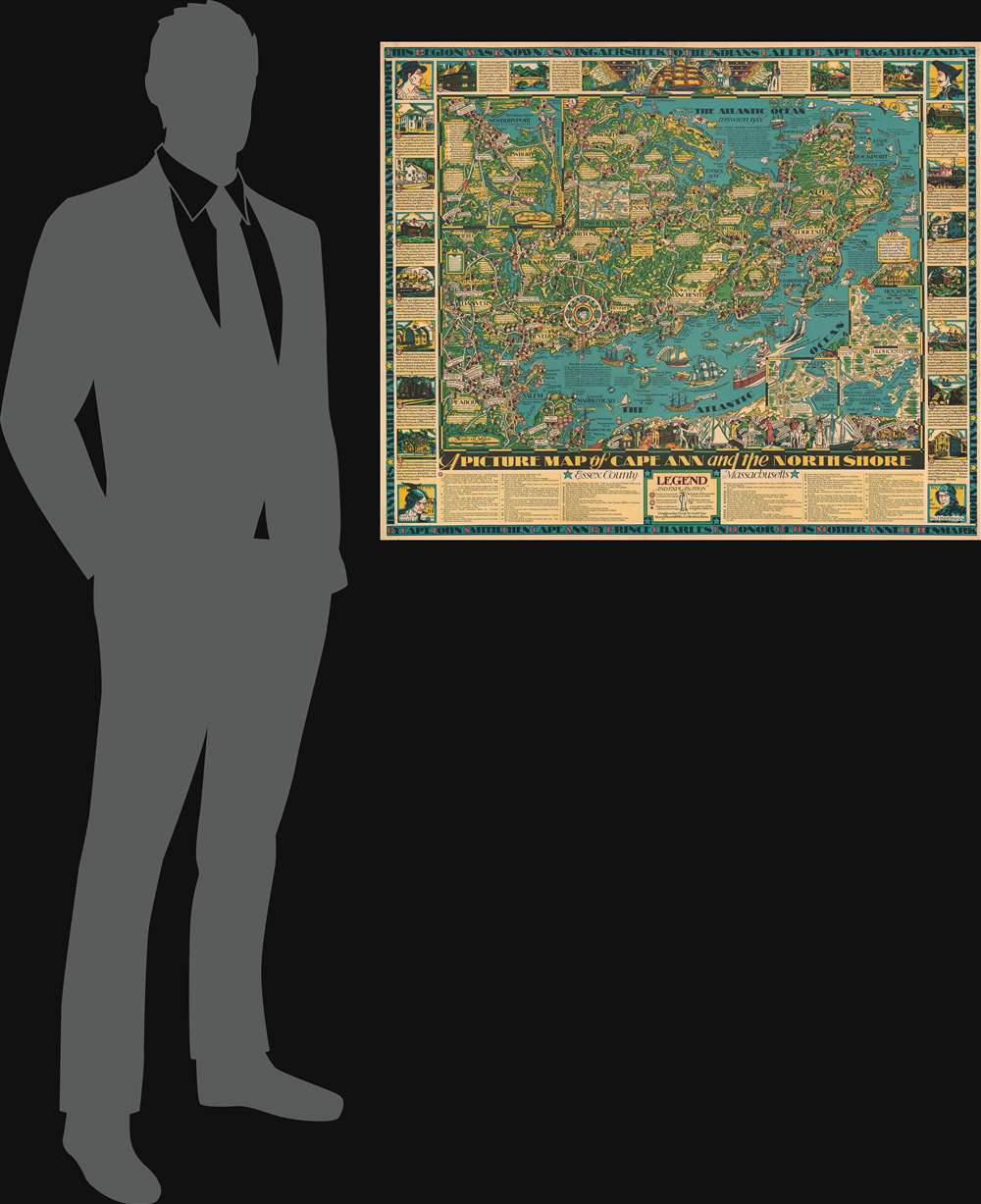 This is a 1934 Errol W. Goff pictorial map of Cape Ann and the North Shore, Massachusetts, communicating the region's significant charm. Coverage extends from Little Neck and Ipswich south to Devereux and Marblehead Neck. Cartoonish illustrations populate the piece, with short captions offering historical content. Rockport, Gloucester, Manchester, Essex, Hamilton, Danvers, and Salem appear, along with numerous other smaller towns and villages. Eighty-two locations are numerically identified and correspond with an index along the bottom border. Some of these locations are situated within one of the insets, each of which highlights a different city. Among the highlighted cities are Gloucester, Salem, Rockport, Ipswich, and Newburyport. Eighteen pictorial vignettes occupy the top, left, and right sides and provide short histories of these eighteen locations. Text along the top and bottom borders reads, 'This region was known as Wingaersheek to the Indiand called Cape Tragabigzanda by Capt. John Smith, the Cap Ann by Prince Charles in honor of his mother Anne of Denmark.'

Pictorial qualities have been common in cartography from at least from the 16th century, when publishers like Braun and Hogenberg incorporated view-like qualities and other pictorial elements into their famous city plans. Braun and Hogenberg, and similar cartographers, issued their town books to express, not necessarily the geography of their subjects, but rather the 'essence' of the town/city. As mathematics and surveying principles became more advanced, travel increased, and the ability to translate 2-dimensional cartographic perspectives into an understanding of the actual world became commonplace, maps themselves transformed. This trend is a recognizable progression that evolved cartographic conventions from the 17th to the 19th centuries. By the late 19th century most maps had become geographical tools that illustrated the region cartographically but failed in the original raison d'être as expressed by Braun and Hogenberg, to illustrate a place's 'essence'. So, where a city map of 19th century Paris might provide a completely navigable presentation of the city, one could glean almost nothing of Paris' character from it. In the late 18th century, the first modern 'pictorial' style maps developed. These maps, like Tomas Lopez's 1788 map of Seville, attempted to provide both cartographic accuracy and pictorial elements that might convey the character of the city. In that case, Lopez incorporated pictorial vignettes to illustrate important buildings and monuments. This style became increasingly common throughout the 19th century and early 20th centuries, particularly for centers of commerce like London, Paris, and Rome, where they are often mass-produced and referred to as 'monumental' maps. The style further evolved in the early to mid-20th century, when revolutionary cartographers and illustrators like MacDonald Gill, Jo Mora, Frank Dorn, Ernest Dudley Chase, and many others, combined vignette-style illustrations, modern printing techniques, inspiration from Japanese printmaking and manga, and from clever satirical cartographers/artists like Fred Rose, to produce maps that once again focused on revealing the essence a place, usually, but not always, at the sacrifice of cartographic precision.

This map was designed by Errol W. Goff and published by the Houghton Mifflin Company in 1934. We note six examples cataloged in OCLC: Harvard University, Pennsylvania State University, the Osher Map Library at the University of Southern Maine, the Buffalo and Erie County Public Library, the University of Illinois at Urbana Champaign, and the David Rumsey Map Collection at Stanford University. Scarce to the market.

Errol William Goff (May 30, 1903 – January 1974) was an American artist and mapmaker. Born in Lowell, Massachusetts, Goff spent his early years in Stafford, Connecticut, but lived in Everett, Massachusetts for most of his childhood. Goff enrolled at the Massachusetts Schools of Arts in 1927. By 1930 Fogg was working as an artist for a mapmaking company according to the 1930 U.S. Federal Census. It might have been Houghton Mifflin, but the historical record is unclear as to when he started working there. Very little else is known about Gruff’s life. By 194 We know that he barried Sophie Irene Waleski on January 25, 1942, in Washington D.C. He and Sophie left Washington, D.C. at some point in the late 1940s or early 1950s most likely, but here is no way to know exactly when. He died in Hancock, New Hampshire. Learn More...