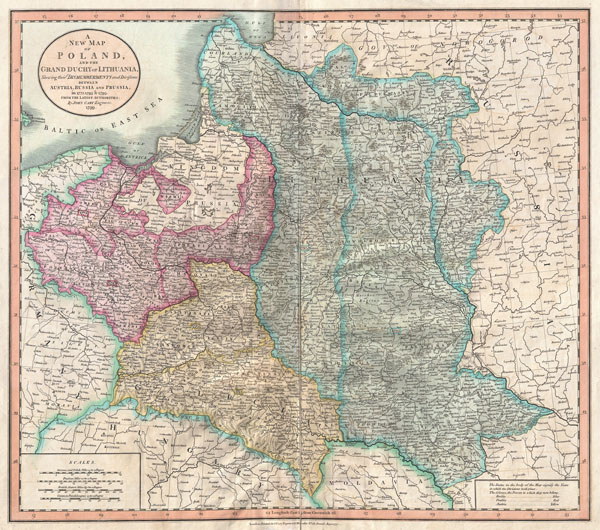 A nice example of John Cary's rare 1799 map of Poland. Covers the entire block of territory claimed by the Polish-Lithuanian Commonwealth (Rzeczpospolita) from the Baltic Sea south to Hungary and eastward as far as Russia. This map is designed to illustrate the partitioning of Poland between Austria, Russia and Prussia at the end of the 18th century – just a few years before this map was published. Russia claimed the bulk of what once comprised the Grand Duchy of Lithuania from Livonia south to Moldava. Prussia claimed the territory east of Warsaw and south to Galicia. The Austrian Empire annexed Galicia. Poland remained thus divided until the end of World War I. In 1919 United States President Woodrow Wilson called for the reconstitution of Poland in his historic Fourteen Points. This map was prepared in 1799 by John Cary for issue in his magnificent 1808 New Universal Atlas.

Good condition. Old closed repair and reinforcement on original centerfold Repaired closed tear from centerfold, at center, running about six inches into Prussia - see zoom in photo as this is barely visible. Minor buckling to the left and right of centerfold.