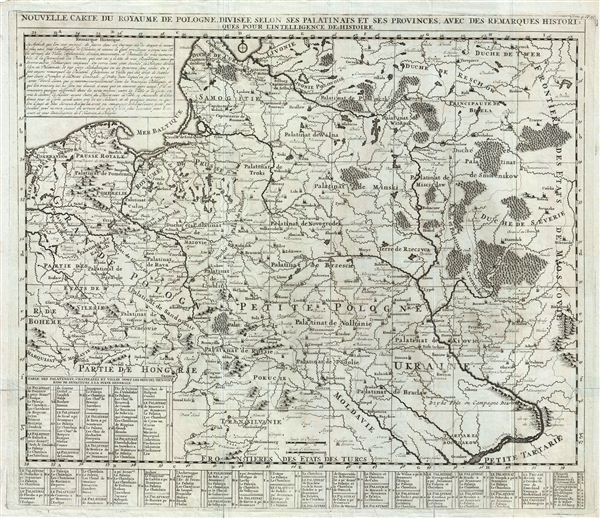 One of the most beautiful atlas maps of Poland to emerge in the early 18th century.

An extraordinary map of Poland issued c. 1710 by Henri Chatelain. Centered on 'Petite Pologne,' the map covers from the Baltic Sea to Transylvania and from Glatz to the border with Moscovie (Russia). Like most of Chatelain's work it is beautifully engraved and masterfully printed on fine paper using an intense dark ink. This striking effect beautifully illustrates the region with forests and mountains appearing in profile. Important cities and Platinates are identified throughout as are lesser cities, castles, and waterways.

As this map was being printed the Polish-Lithuanian Commonwealth was suffering from political and social upheaval. Following the death of King John III Sobieski and the end of Poland's Golden Age, a series of internal conflicts and external invasions destabilized the region to the brink of anarchy. The rapacious Russian empire, under Tzar Peter the Great, used its influence to further weaken the state in anticipation of outright annexation. By 1768 the Polish-Lithuanian Commonwealth had become a protectorate of Imperial Russia.

Without a doubt one of the most beautiful 18th century atlas maps of Poland, this chart was issued as plate no. 19 in volume 4 of Chatelain's Atlas Historique.