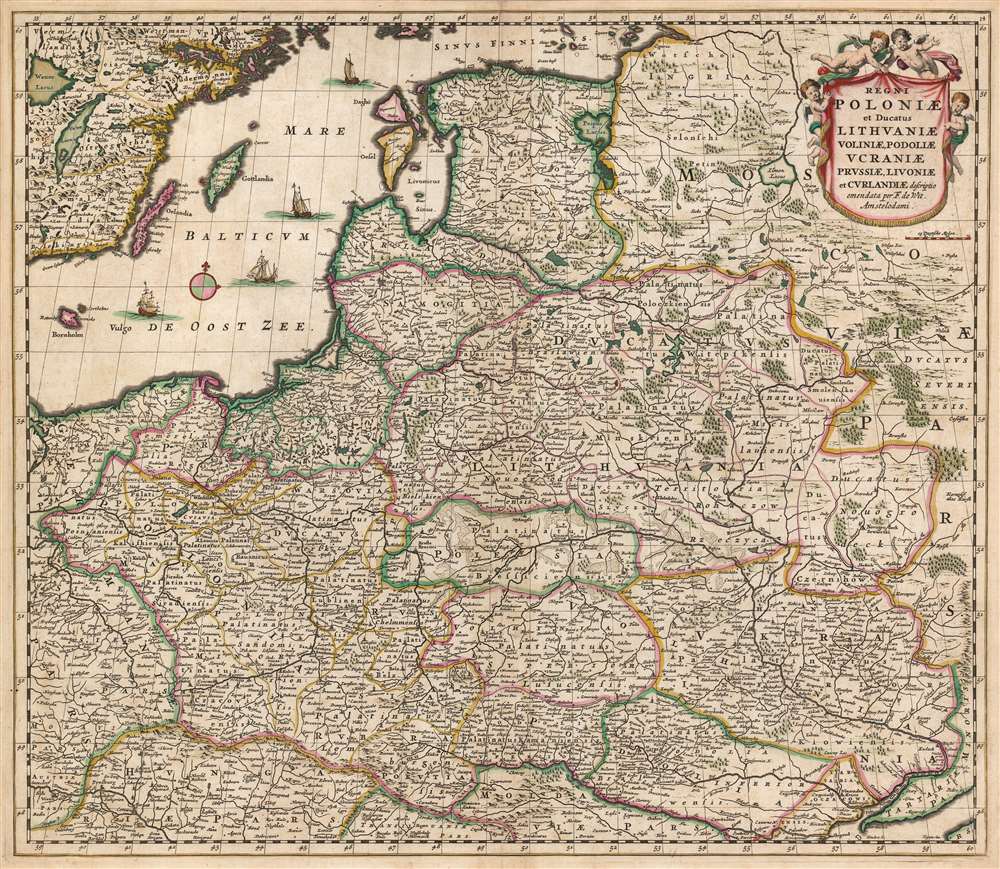 This is a striking example of Frederik de Wit's 1680 map of the Kingdom of Poland and the Grand Duchy of Lithuania. The map spans from the Baltic Sea to the Black Sea, and from Latvia to Moldova, including much of modern-day Poland and Lithuania.

The End of a Golden Age

It represents the 'Deluge', final days of Polish Golden Age. When this map was initially engraved in 1655, the Commonwealth was one of the largest and most powerful kingdoms in Europe, stretching from modern Estonia in the north to Moldavia in the east and Bohemia in the west. The Khmelnytsky Uprising of 1648 and the Truce of Andrusovo in 1667 began a series of invasions by Russia and Sweden, collective known as 'The Deluge' or the 'Russo-Swedish Deluge'. The seemingly unending invasions laid Poland low, with the Commonwealth losing most of its power and about 1/3rd of its population. One of the most notable effects of the devastating Deluge was the subsequent weakening of Poland's international standing. With the entire Polish nation crippled by the Swedes and Russians, Russia was able to rise, found the Russian Empire in early 18th century. and play a major role in the Partitions of Poland in the latter half of the 18th century.

This map was engraved by Frederick de Wit as early as 1655 and appeared in De Wit's atlas in this form until perhaps 1688. After 1689 the map's title was changed to indicate De Wit's receipt of a privilege. The present example, lacking any privilege, was certainly printed prior to 1688. The sharpness of the image suggests an early strike. In various editions this map is well represented in institutional collections.