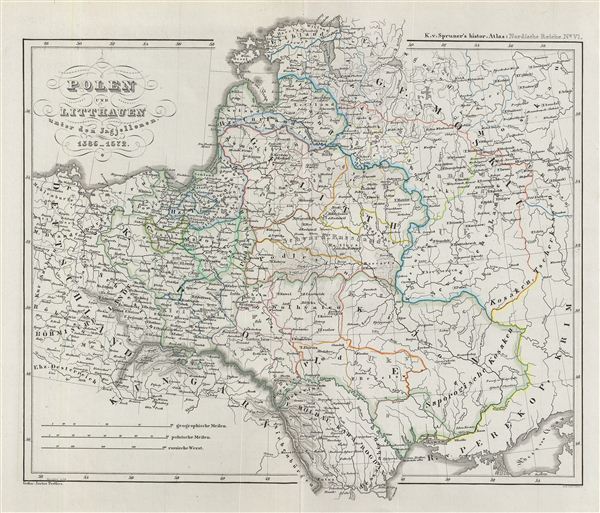 This is Karl von Spruner's 1854 historical map of Poland and Lithuania under the Jagiellon Dynasty, 1387 to 1572. The map covers Poland and Lithuania from estonia in the north to Moldavia in the south. The 1385 Union of Krewo, or marriage of Jogaila, Grand Duke of Lithuania, to Jadwiga, Queen of Poland, marks the beginning of the Jagiellon Dynasty and nearly 400 years of shared Polish-Lithuanian history. The union proved beneficial to both nations and lead to an expansive empire covering from the Baltic to the Black Sea, making Poland-Lithuania one of the largest political entities in europe for the next 400 years. The whole is rendered in finely engraved detail exhibiting throughout the fine craftsmanship of the Perthes firm. Prepared by Karl Spruner for publication as plate N VI in the second edition of Justus Perthes' 1854 Historich-Geographischer, Hand-Atlas zur Geschichte der Staaten europa's vom Anfang des Mittelalters bis auf die Neueste Zeit.