1840 S.D.U.K. Map of Polynesia or the Islands in the Pacific Ocean 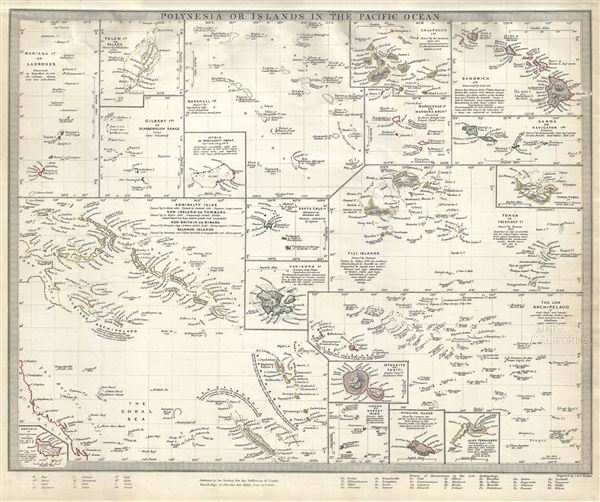 1840 S.D.U.K. Map of Polynesia or the Islands in the Pacific Ocean

This is a fine example of the 1840 Society for the Diffusion of Useful Knowledge or S.D.U.K. map of the islands of the Pacific Ocean or Polynesia. Essentially twenty maps on one sheet, it covers the Mariana Islands or Ladrones, the Pelew Islands or Palaos, Gilbert Islands or Scarborogh Range, Otdia or Romanzoff Group, Marshall Islands, Galapagos Islands, Marquesas or Mendana Archipelago, Sandwich Islands, Samoa or Navigator Islands, Tonga-Tabou Islands, Tonga or Friendly Islands, Fiji Islands, Santa Cruz Island, Vanikoro Island, The Low Archipelago, Otaheite or Tahiti, Cooks or Hervey Isles, Pitcairn Island, Juan Fernandez, Norfolk Island and, in a large inset, the Admiralty Isles, New Ireland or Tombara, New Britain or Birara and Salomon Islands. Also notes the dates of discovery as well as the dates the islands were ceded or settled by the British.

The "Society for the Diffusion of Useful Knowledge" was a Whiggish organization founded in 1828 at the instigation of idealistic British lord Henry Peter Brougham. The admirable goal of the Society was to distribute useful information via a series of publications to the English working and middle classes. It promoted self-education and the egalitarian sharing of all knowledge. While closely tied to the London University and publishing houses on the order of Baldwin and Cradock, Chapman and Hall, and Charles Knight, the Society failed to achieve its many lofty goals in finally closed its doors in 1848. Most likely the failure of the Society resulted from its publications being too expensive for its intended lower to middle class markets and yet not large and fine enough to appeal to the aristocratic market. Nonetheless, it did manage to publish several extraordinary atlases of impressive detail and sophistication. Their most prominent atlas consisted of some 200 separately issued maps initially published by Baldwin and Cradock and sold by subscription from 1829 to 1844. Afterwards, the Society combined the maps into a single world atlas published under the Chapman and Hall imprint. In its day, this atlas was unprecedented in its quality, scope, and cost effectiveness. Today Society, or S.D.U.K. as it is commonly known, maps are among the most impressive examples of mid-19th century English mass market cartographic publishing available. The S.D.U.K. is especially known for its beautiful and accurately detailed city plans.