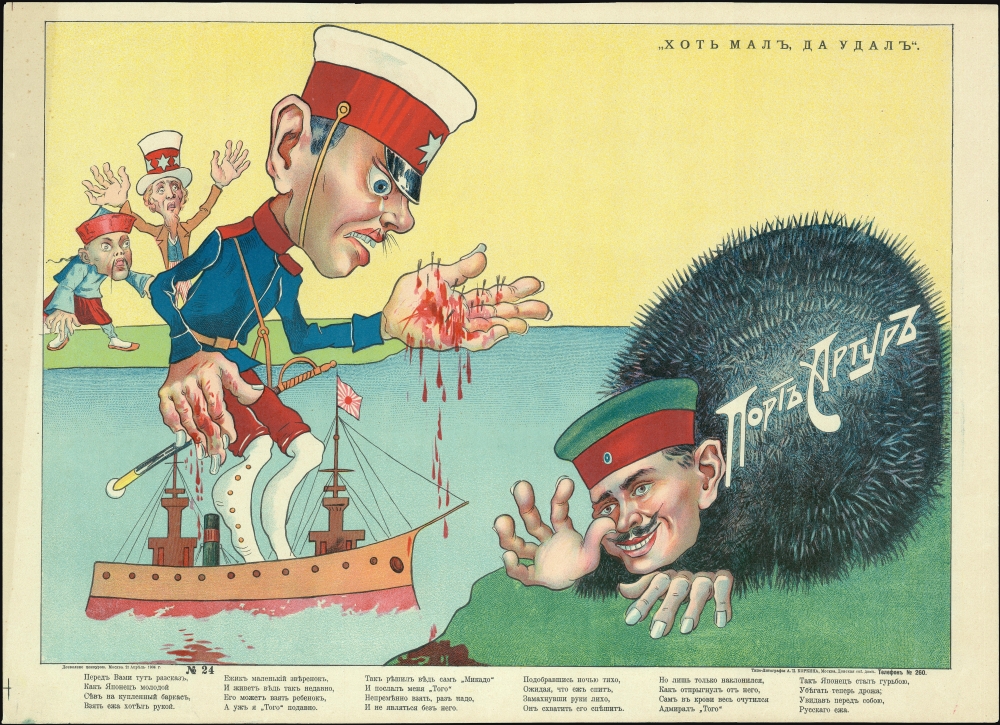 A rare 1904 Russian chromolithograph lubok by A. P. Korkin illustrating the Battle of Port Arthur (February 1904), the opening salvo of the Russo-Japanese War (1904 - 1905). The image depicts the Imperial Japanese Admiral Tōgō Heihachirō Saneyoshi standing on a destroyer looking at his bloodied hand. Port Arthur (modern day Lüshunkou) is represented as a hedgehog with the face of Vice-Admiral Oskar Stark (1846 - 1928). In the background the United States and China are dismayed by inactive. Both sides came away from the battle bloodied, but as the Russians effectively beat off a surprise night attack, they are generally attributed a narrow victory. This would not be the case in subsequent battles wherein Russian forces were soundly defeated by the Imperial Japanese.

The Battle of Port Arthur

The Battle of Port Arthur, fought on February 8 - 9, 1904, was the opening battle of the Russo-Japanese War (1904 - 1905). On February 8, an Imperial Japanese naval squadron, led by Marshal-Admiral Marquis Tōgō Heihachirō Saneyoshi (東郷 平八郎; 1848 - 1934), launched a pre-emptive night strike against the Port Arthur based Russian Pacific Fleet led by Vice-Admiral Oskar Stark (1846 - 1928). Despite the advantage of surprise, the Japanese attack yielded little and the battle ended indecisively - with both sides claiming victory. Strategically, Port Arthur was important to both the Russians and the Japanese. For the Russians, it was the terminus of the Southern Manchurian Railway, which Russians managed, and which connected to the Trans-Siberian Railway - thus providing an essential warm water port. For the Japanese, taking Port Arthur was a cornerstone of their plans to invade Manchuria and ultimately, China. Taking Port Arthur was also important in preventing growing Russian influence in East Asia.

The lubok is a Russian satirical print. Such prints were produced in Russia from at least the 17th century and well into the 19th century. Lubki (plural) typically contained a story or lesson and often poked fun at authorities. One of the earliest lubok, from 1760, depicts Peter the Great's burial as teams of mice burying a cat (Peter). During the Russo-Japanese War (1904 - 1905) modern printing techniques such as chromolithography were applied to the lubok tradition. Although officially banned, lubok production documented much of the Russo-Japanese War, often portraying the Japanese as small and ineffectual. Others poked fun at Russian overconfidence. Many lubki found their way to Japan, enabling Japanese strategists to better understand Russian attitudes and thereby predict how they would react under various circumstances - leading to a tactical superiority throughout the war.

This satirical image was printed in Moscow in 1904 by A. P. Korkin (А. П. КОРКИНА). The map is dated April 21, 1904 with a note suggesting that it passed the censorship board - likely the reason its printer is attributed. We have identified a few examples in Russian historical collections, but none in the US. No market history.

A. P. Korkin (А. П. КОРКИНА; fl. c. 1904 - 1919) was a Russian lithographer and publisher based in Moscow in the early 20th century. Korkin was a master of chromolithography and is best known for his satirical lubki or lubok prints. During World War II, he partnered with A. V. Beideman. Learn More...