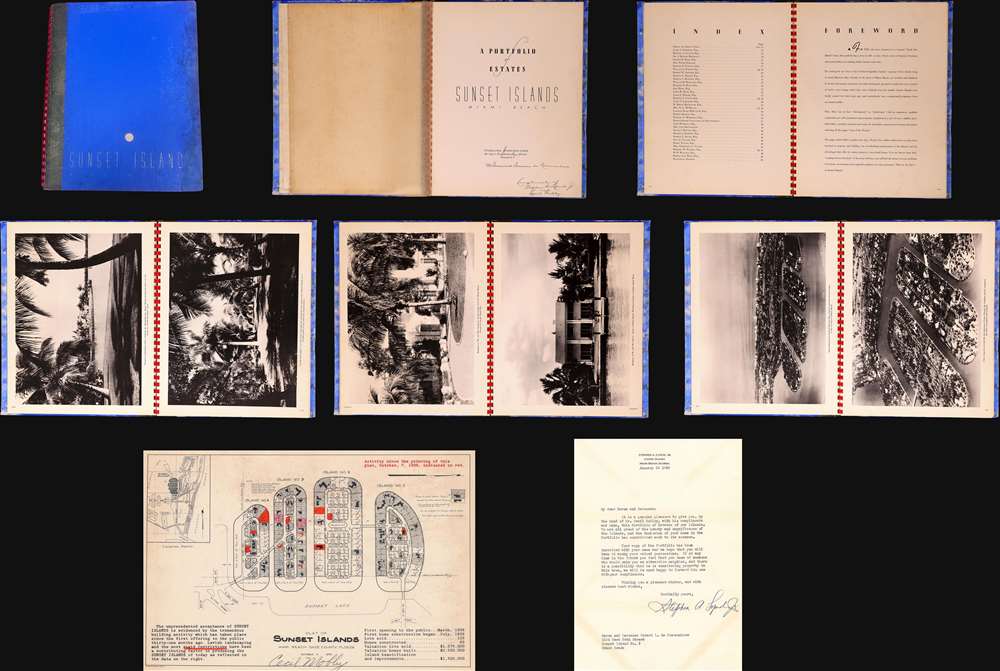 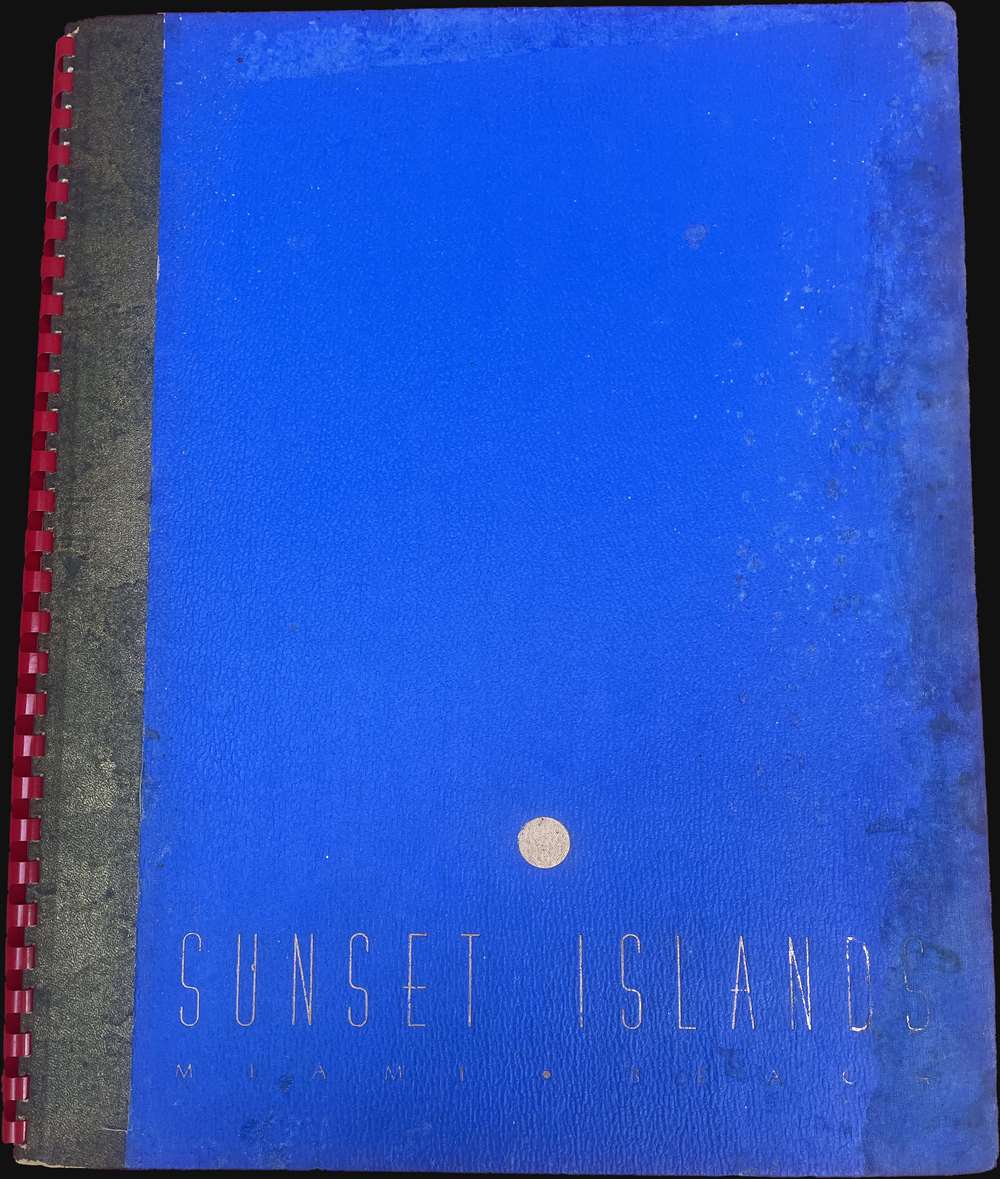 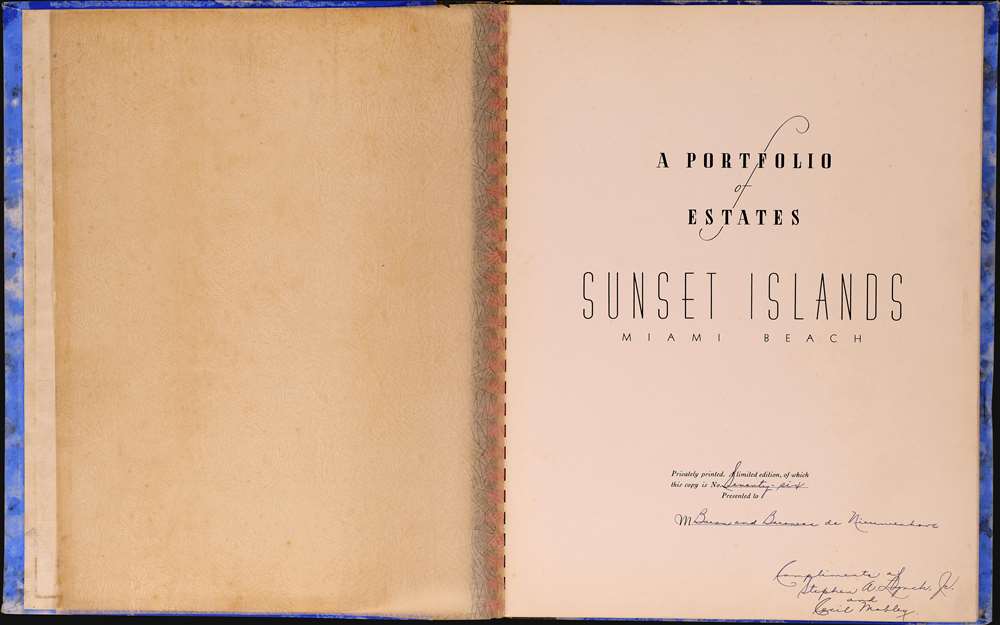 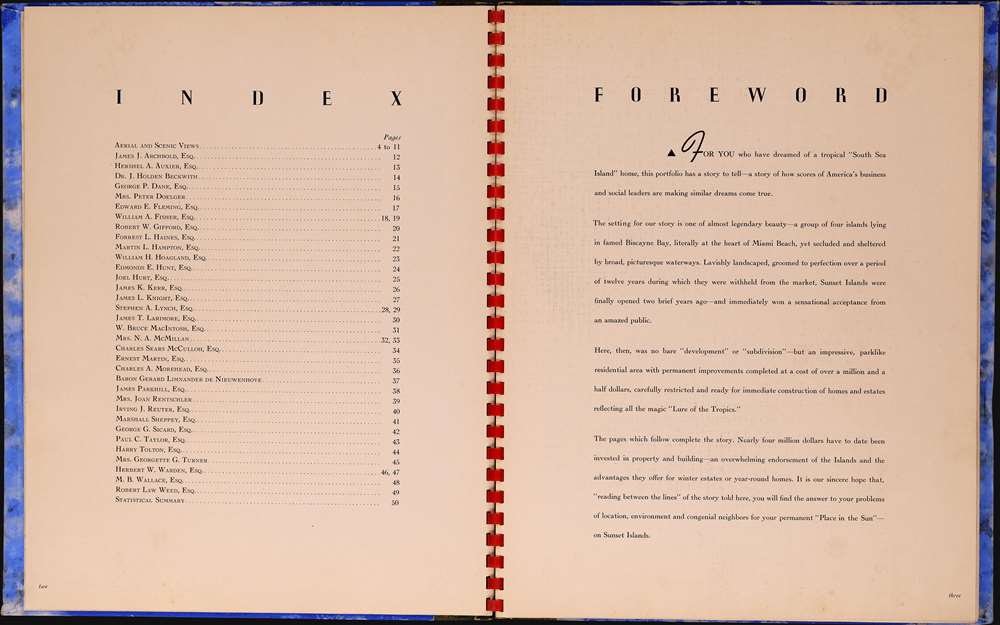 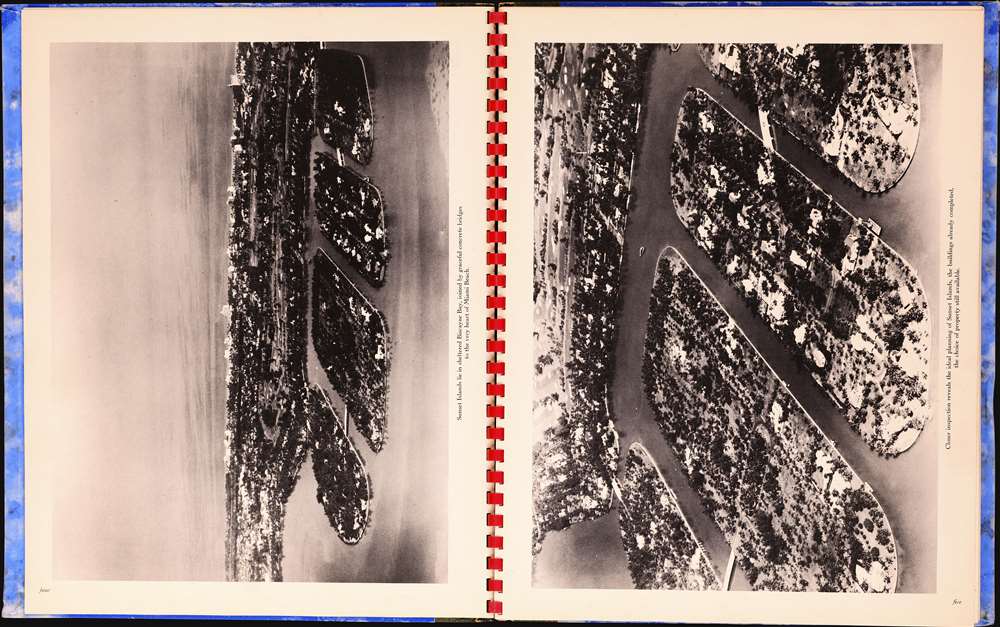 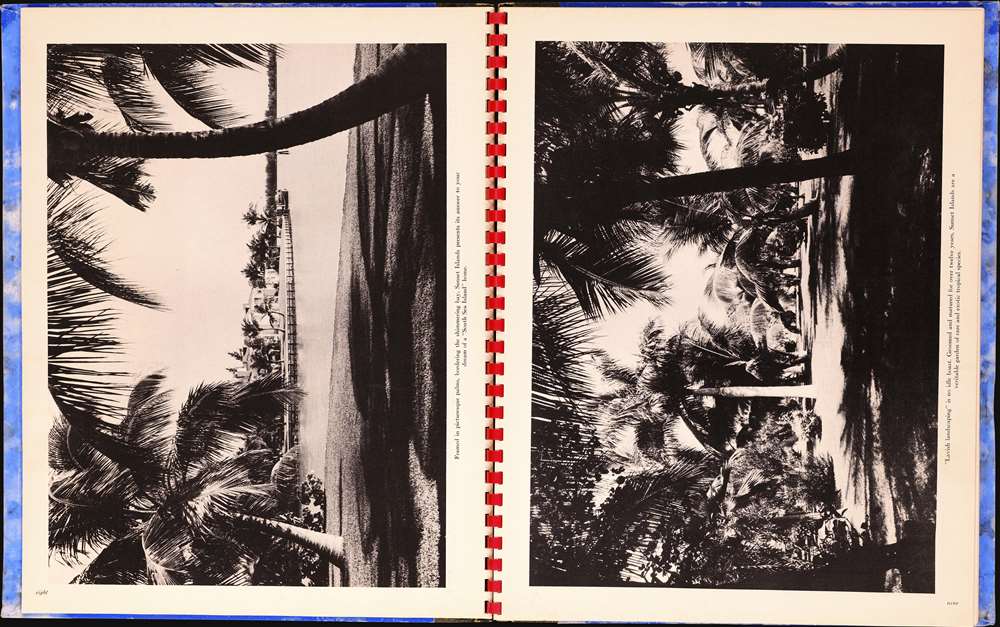 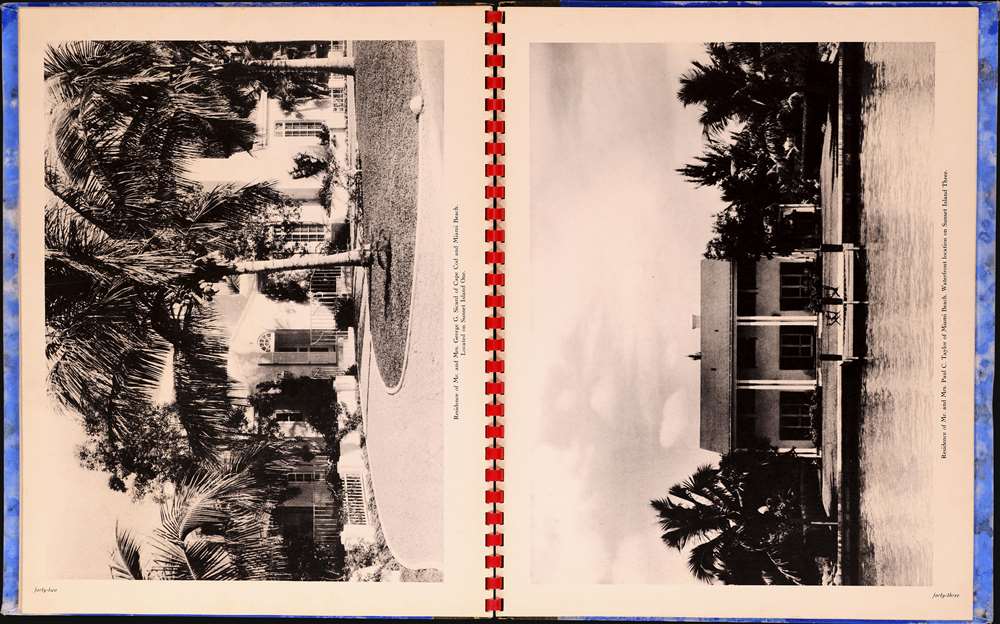 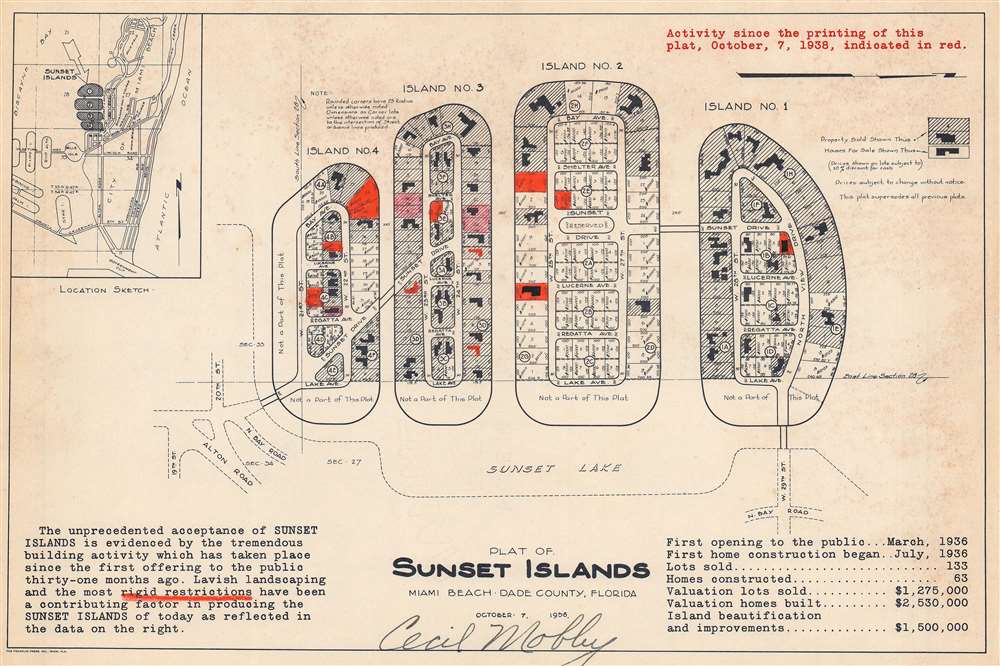 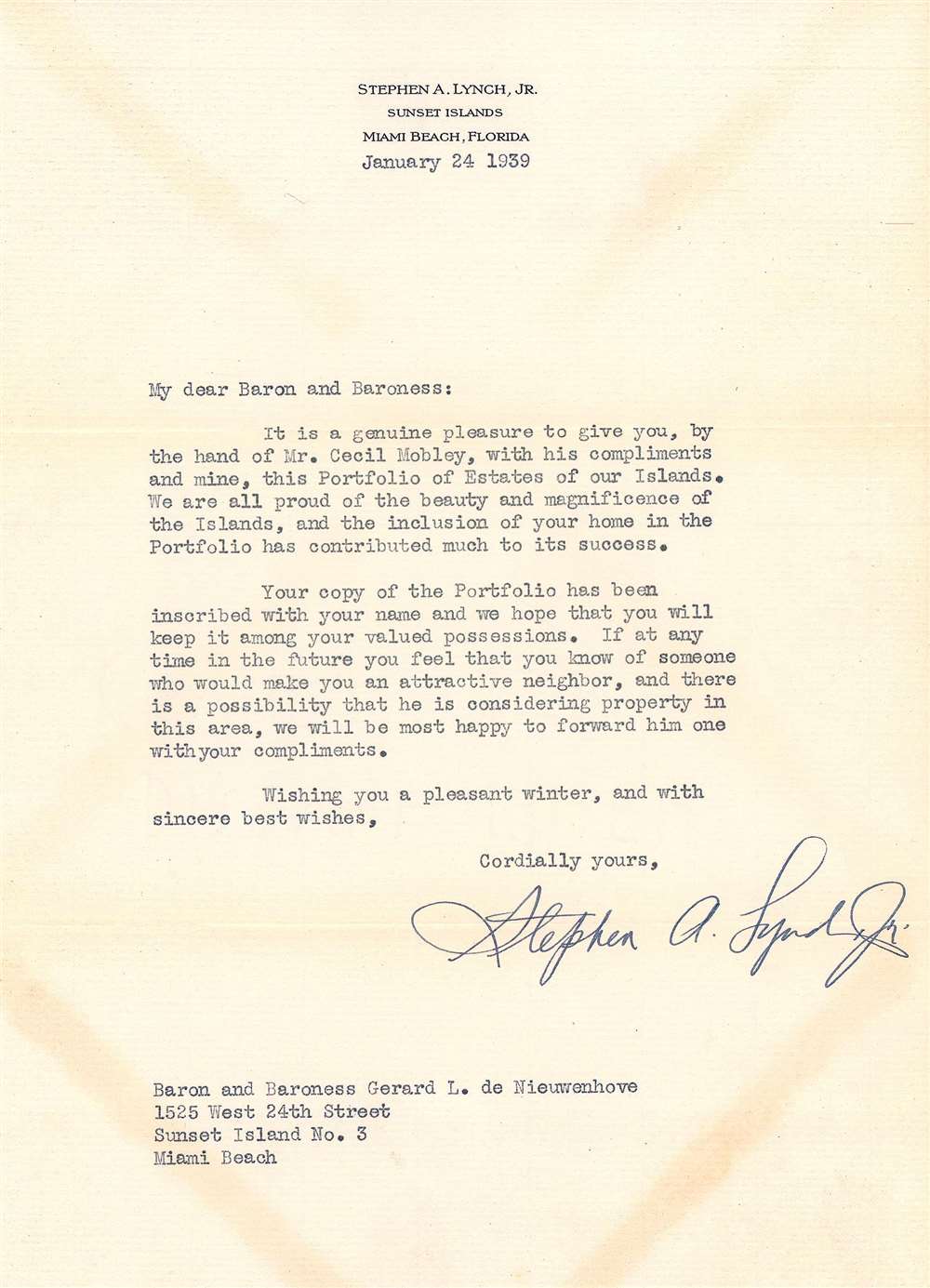 This is a 1939 Sunset Island Company and Stephen A. Lynch Jr. pictorial portfolio and map of the Sunset Islands, Miami Beach, Florida. This promotional volume was published in a limited edition for Sunset Islands property owners (and prospective owners). The present example, signed by Lynch and Mobley, was presented to the Belgian nobles Baron and Baroness Gerard L. de Nieuwenhove. A spiral bound volume features photographs of fabulous Sunset Islands estates. A plat map signed by Mobley accompanies the portfolio, along with a typewritten letter on Lynch Jr.'s letterhead to the Baron and Baroness.

The Sunset Islands are four man-made islands in Biscayne Bay just north of the Venetian Islands, Star Island, Palm Island, and Hibiscus Island. They were the brainchild of early motion picture mogul turned Miami real estate developer Stephen Andrew Lynch (1882 - 1969). The islands were initially built in the 1920s, at the height of the Florida Land Boom. They were platted in 1925, the canals dredged in 1926, and the bridges constructed between 1927 and 1929. When the Great Depression caused the Florida Land Boom collapse, the Sunset Islands had been fully landscaped, but remained otherwise undeveloped. Recognizing the cyclical pattern of the economy, and flush with Hollywood cash, Lynch held off further development. In 1936, Lynch told the Miami Herald that '… the islands were held off market until this year, when conditions deemed that the property be offered for public sale.' Nonetheless, Lynch constructed his own lavish mansion at the southwest corner of Island no. 2. Further development did not follow until the markets rebounded in the late 1930s - hence this publication.

This portfolio was published and privately printed in 1939 in a limited edition by the Sunset Island Company. Stephen A. Lynch Jr. and Cecil Mobley played a crucial role in its production. The present example is no. 76. We are aware of examples as high as no. 147. We note five examples cataloged in OCLC which are part of the collections at the Cleveland Public Library, Duke University, the University of Central Florida, Florida International University, and the University of Miami.

Stephen A. Lynch Jr. (November 13, 1908 - September 24, 1974) was an American businessman. Born in Asheville, North Carolina, Lynch graduated from Marist College (a prep school), the University of North Carolina, and the Harvard Business School. In 1935, after graduating from Harvard, Lynch moved to Miami (where his family moved in 1914 while he was in school) to join his father's firm. He succeeded his father as president of the firm in 1953. Lynch spent most of his adult life in Miami, with the exception of the time spent working as an account executive for the American Broadcasting Company in New York City and the five years he spent in the U.S. Navy during World War II. Lynch's father founded the family business in 1920 and established its headquarters in Miami in 1935. The company owned 400 theaters from Key West to El Paso, Texas, and built the Sunset Isles, the Venetian Causeway, and the Columbus Hotel, along with numerous other hotels throughout the southeastern United States. Lynched was a member of the Orange Bowl Committee and even served as its president in 1959. Learn More...