1830 French Ministry of the Navy Map of Guantánamo Bay, Cuba 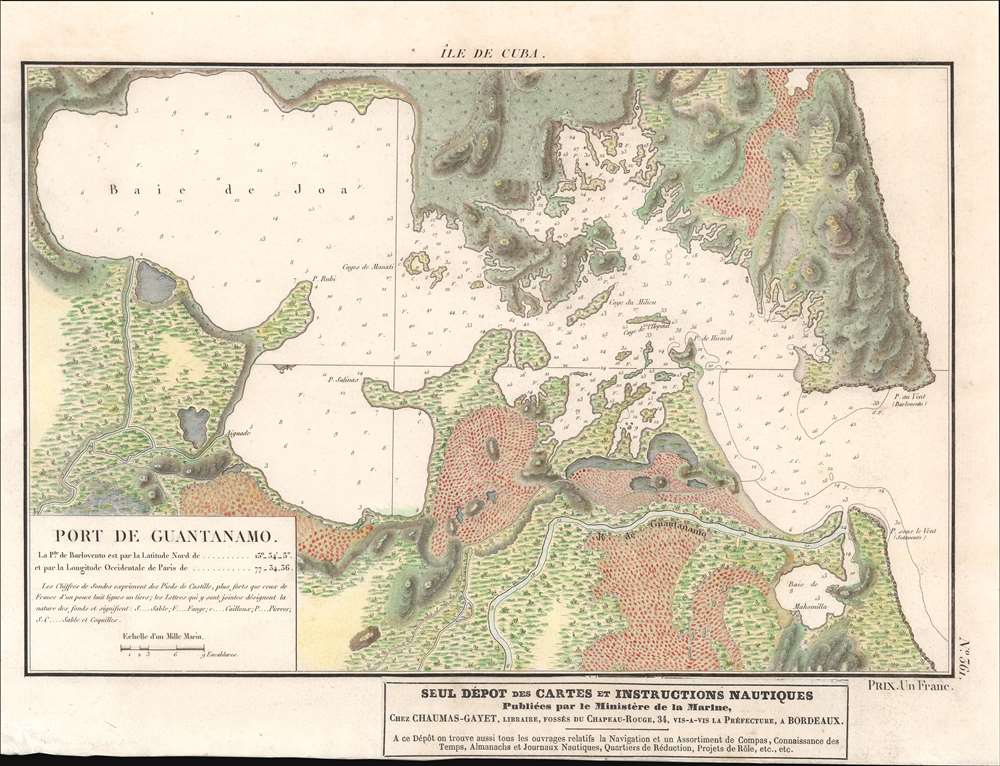 1830 French Ministry of the Navy Map of Guantánamo Bay, Cuba

This is a c. 1830 French map of Guantánamo Bay, Cuba, published by the French Ministry of the Navy. Depth soundings are noted in Guantánamo Bay as well as in the nearly Guantánamo River, suggesting that the river was then navigable. Inland topography details the nearby landscape, but there is notably no trace of human habitation anywhere on the map. A pastedown at bottom center advertises Chez Chaumas-Gayet, a book, map, and chart seller in Bordeaux, France, active in the early to mid-19th century.

The French in Guantánamo

Between 1810 - 1830, the bay would have been of interest to the French, many of whom landed in Guantánamo after fleeing the revolutionary wars in Haiti (1791 - 1804) and the subsequent destabilization. French expatriates were involved in renovating and laying out the nearby city of Guantánamo, just 15 miles to the north. With a rich plantation culture, excellent harbor, and weak central government in Havana, Guantánamo may have seemed like a second chance for the French, who despite setbacks in Haiti, were once again waxing historical.

Gitmo, Then and Now

Although Guantánamo, or Gitmo, is today synonymous with the War on Terror, detainees, a U.S. Naval Base, and American imperialism, this was not always the case. Guantánamo is a major port in the southeastern part of Cuba, unique for being surrounded by high mountains that somewhat separate it from the surrounding territory. It was first visited by Columbus in 1494, who named it Puerto Grande. Afterwards, it became one of the most important ports in Southern Cuba, notable for being fully sheltered from dangerous Caribbean storms. It was briefly sized by the British in 1741 during the War of Jenkins Ear (1739 - 1748) who renamed it Cumberland Bay. When this map was made, in the early 1800s, the bay was an important anchorage. The new name lasted no longer than the British occupation. After the United States seized control of Cuba during the Spanish American War (1898), Cuba President Tomás Estrada Palma, offered the U.S. a perpetual lease on the Bay. The subsequent 1903 Cuban-American Treaty of Relations held, among other things, that the United States, for the purposes of operating 'coaling and naval stations', has 'complete jurisdiction and control' of the Guantánamo Bay. Today the Bay hosts an important U.S. Naval base and prison, Gitmo, as it is known colloquially. Cuba had accepted only one lease payment from the U.S. in over 100 years of occupation, citing the illegality of U.S. claims. While Cuba does not recognize U.S. claims on the bay, it is de facto fully under U.S. military control. During the War on Terror (2001 - ????), the Guantánamo Bay naval base was developed as a dentation center for political prisoners and, despite international protest, remains so to this day.

This map was published by the French Ministry of the Navy c. 1820 - 1830. An example is cataloged in OCLC as part of the collection at the British Library.