1836 Featherstonhough Map of the American Midwest 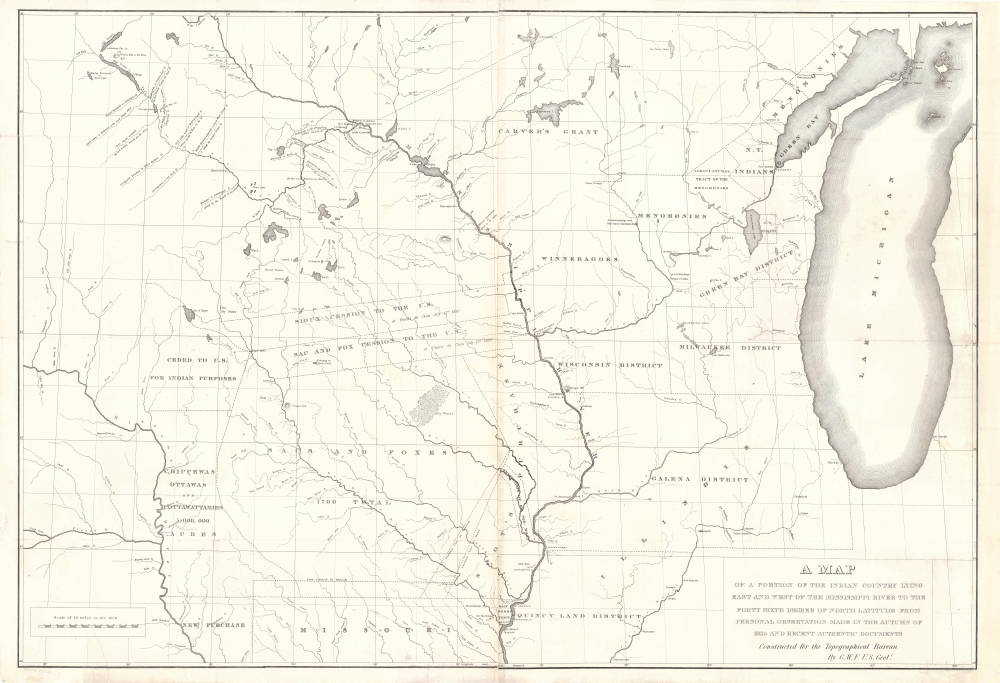 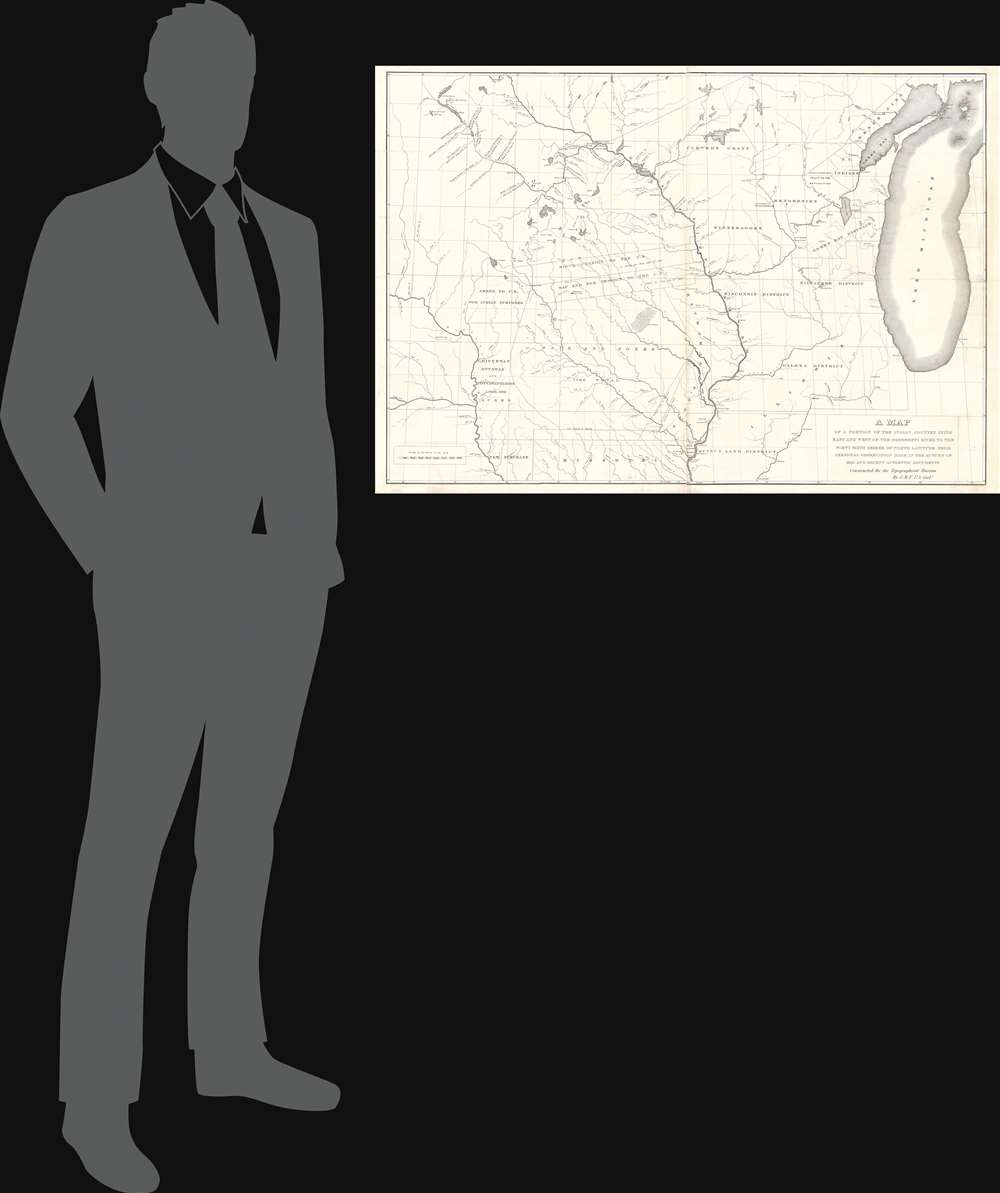 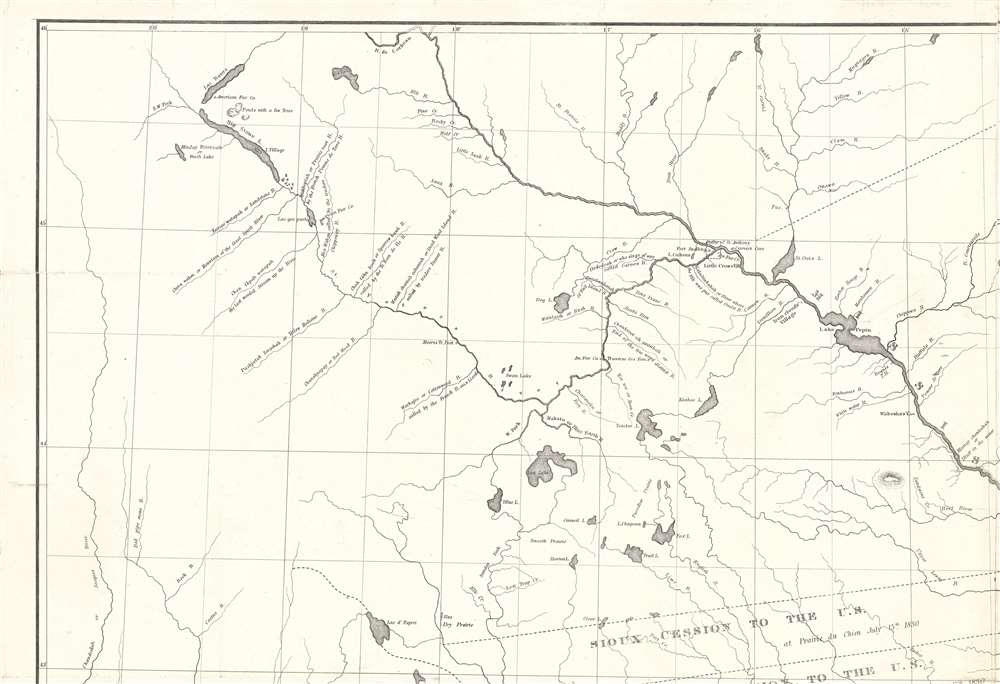 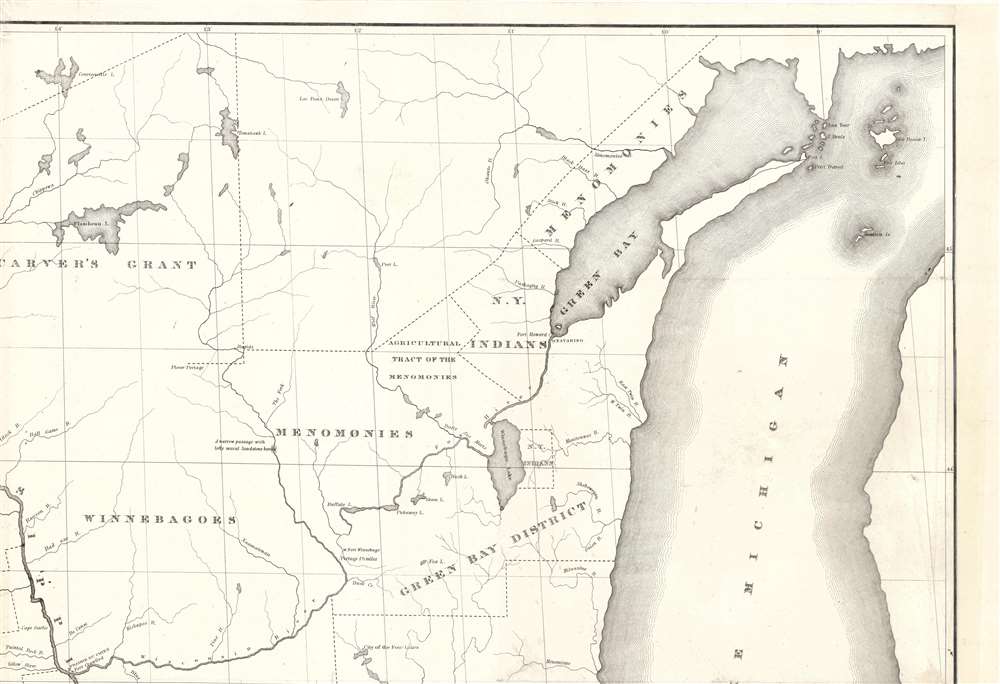 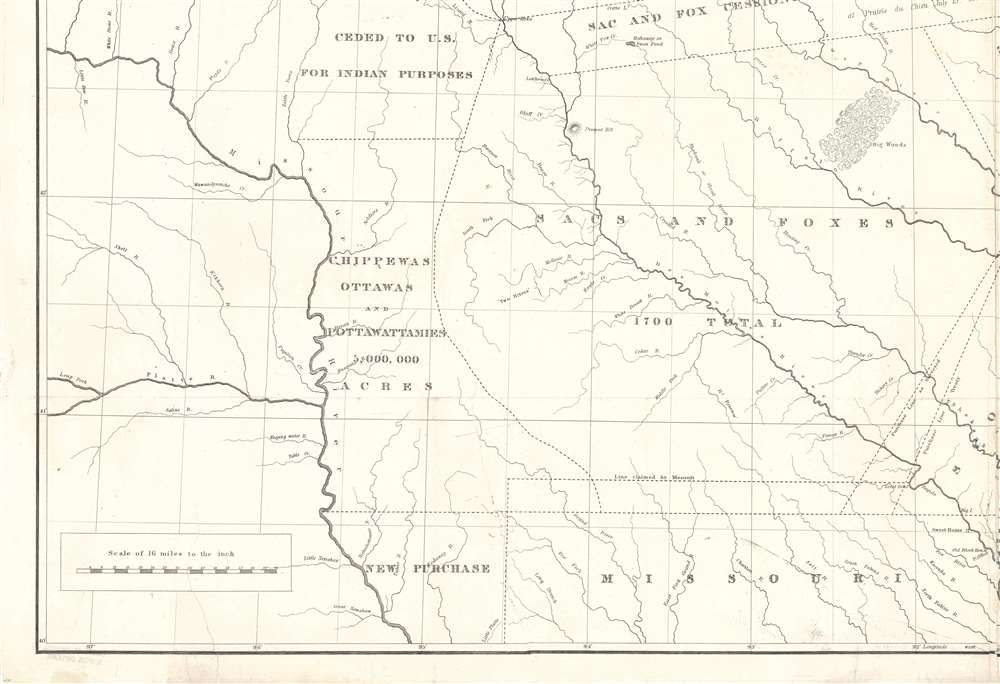 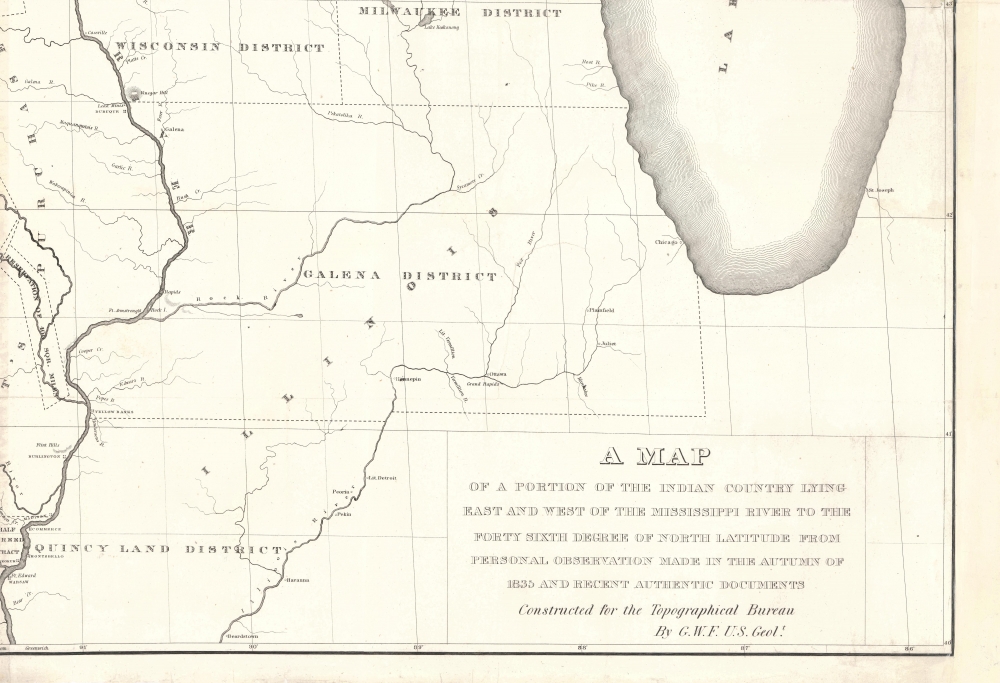 1836 Featherstonhough Map of the American Midwest

One of the greatest maps of the Upper Mississippi published in the early 19th century.
$2,000.00

This is an 1836 George William Featherstonhaugh map of the American Upper Midwest. Coverage extends from modern-day eastern Nebraska to Lake Michigan and from Green Bay south to Missouri, with land grants, tracts, and cessions illustrated. The Mississippi River cuts a generally vertical path through the map's center, before curving to the west. Rivers and lakes are illustrated throughout, many of which include short notes. Several forts, including Fort Snelling, Fort Winnebago, and Fort Crawford are marked. Prairie du Chien, Dubuque, Yellow Banks, Madison, Commerce, Burlington, and numerous other settlements are labeled.

Districts and Grants East of the Mississippi - including Carver's Grant

Several land districts are delineated east of the Mississippi, including the Green Bay District, the Milwaukee District, the Wisconsin District, the Galena District, and the Quincy Land District. Perhaps the most intriguing is Carver's Grant, a nebulous swath of land in what is today eastern Wisconsin and western Minnesota. The story of Carver's Grant begins with Jonathan Carver (1710 - 17800, a British soldier. Carver was tasked with mapping the main rivers in Wisconsin and Minnesota in 1766 in preparation for an expedition searching for the Northwest Passage. Carver immediately left for the West and spent the winter of 1766 near the Falls of St. Anthony with Sioux Indians. Then, he spent part of 1767 with a party sent by Robert Rogers (1731 - 1795). The whole expedition got as far as Grand Portage on Lake Superior before lack of supplies forced them to turn back. Carver returned to Britain in 1769, where he collected his pay and published a very popular 1778 memoir Travels through the Interior Parts of North America.

It was not until after Carver's death that claims of a 10,000-square-mile land grant in the Upper Mississippi Valley given to him by the Sioux surfaced. The deed was never located, but that did not deter Carver's descendants from petitioning the U.S. government for ownership. This forced the U.S. Congress to investigate, eventually reaching the conclusion, corroborated by Sioux elders, that the grant never existed. Nevertheless, speculators tried to sell portions of the 'Carver Grant' for another half century.

Land Tracts, Purchases, and Cessions West of the Mississippi River

Cessions and 'purchases' from Native American tribes create the delineated land tracts west of the Mississippi River. The Fourth Treaty of Prairie du Chien stipulated that the Sioux and Sac and Fox tribes cede strips of land stretching from the Mississippi River to the Des Moines River, both of which are illustrated here. Scot's Purchase is labeled in the bottom center. This purchase, also known as the Forty Mile Strip or the Black Hawk Purchase, was a land cession forced by the United States as part of the treaty ending the Black Hawk War.

The text 'Half-Breed Tract' appears at the confluence of the Des Moines River and the Mississippi River. Half-Breed Tracts were tracts of land that were designated by the U.S. government specifically for métis individuals of American Indian and European ancestry. Mixed-race children were traditionally excluded from receiving land on official Indian reservations, which led to the creation of these tracts. The tract in Lee County, Iowa, was created in 1824, although the people living there were only allowed to occupy the land, not own it. Congress repealed that stipulation in 1834, which led to wild land speculation and nearly all the métis people losing their land claims.

This map was created by George William Featherstonhaugh and published by the U.S. Topographical Bureau in 1836. This map is well represented in institutional collections and is scarce on the private market.

George William Featherstonhaugh (April 9, 1780 - September 28, 1866) (pronounced Feer-sten-haw) was a British-American geologist and geographer. Born in London, Featherstonhaugh grew up in Scarborough in North Yorkshire. He went to the United States with the intention of studying indigenous languages in 1806. Two years later, on November 6, 1808, he married Sarah Duane in Schenectady, New York, with whom he had four children. During this time, he farmed and set up the first New York Board of Agriculture. Featherstonhaugh also began advocating for a railroad between the Hudson River at Albany and the Mohawk River at Schenectady. It took ten years for this plan to receive enough support, but Featherstonhaugh finally applied for a charter in December 1825, which was granted on April 17, 1826. Also in 1826, Featherstonhaugh's wife and two daughters died, which led him to sell his estate and moved to Philadelphia. Construction of the railroad began on July 29, 1830, and it opened on August 13, 1831. Featherstonhaugh remarried, to Charlotte Williams Carter, on January 28, 1831, with whom he had three children. In 1834, Featherstonhaugh was appointed the first U.S. government geologist. That year he left for St. Louis to survey parts of the Louisiana Purchase with his son George Jr. as his assistant. Featherstonhaugh travelled a large section of the upper Midwest from Green Bay, Wisconsin to the Wisconsin River and then downstream to Prairie du Chien, and then up the Mississippi to the Minnesota River. He travelled the Mississippi, Ohio, and Tennessee rivers in 1837, and then attended the Cherokee National Council in Red Clay, Tennessee. While ostensibly in the area to survey the mountainous regions in North Carolina and Georgia, Featherstonhaugh also spied on white people living with the Cherokee for the U.S. government. He and his family moved to England in 1838. Upon his return, Featherstonhaugh was appointed a commissioner to help settle the northern boundary dispute between the United States and Canada. After successfully solving the problem with the Webster-Ashburton Treaty, Featherstonhaugh was named consul from the British Government to the departments of Calvados and Seine, France. In this capacity, Featherstonhaugh almost single-handedly arranged and led the escape of the King and Queen of France to London after Louis Napoleon led a military coup against the King of France. Learn More...