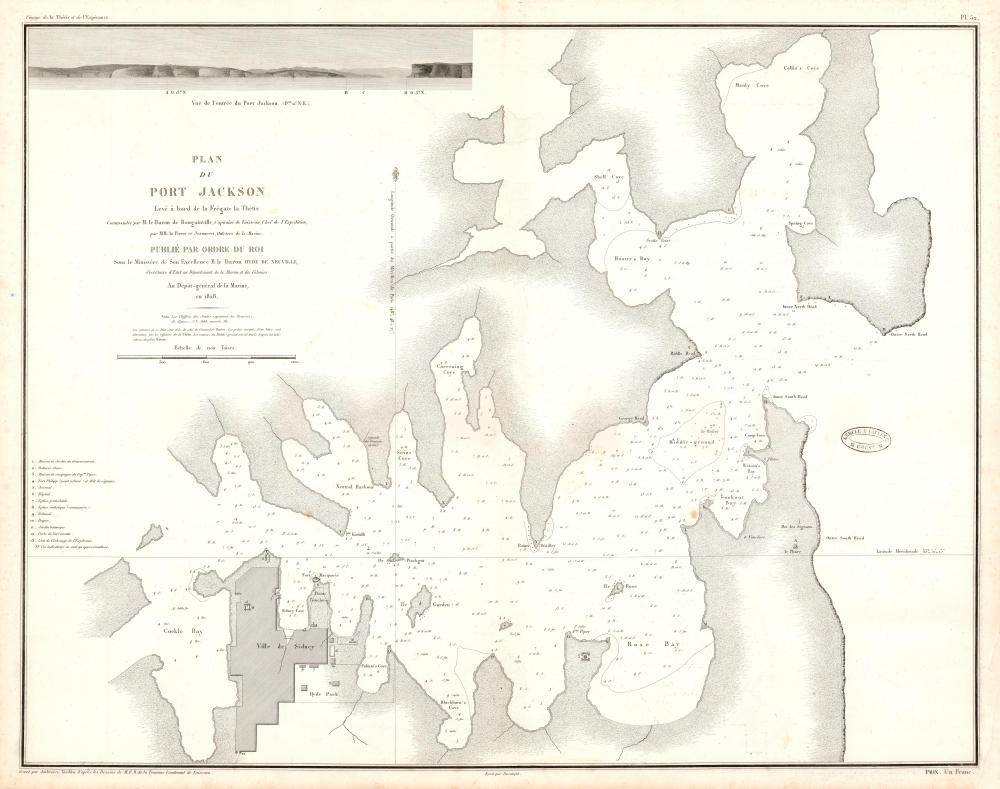 Superbly engraved for the Dépôt Général de la Marine by Ambrose Tardieu, the chart shows the nautical approaches to the old town of Sydney via Port Jackson. It is a working chart: not only depth soundings, but notations of the quality of the sea bottom are meticulously noted. The coastlines are shown pictorially, distinguishing between the cliffs facing the ocean and the sandy inward-facing coves. The plot of the town of Sydney is shown only in outline, but key features and buildings in and around the town are shown in surprising detail. Sir Henry Browne Hayes' Vaucluse House is marked, across Lookout Bay from the pilot-house overlooking Watson's Bay. The signal station and Macquarie Lighthouse are shown as well. Both shown on the map and keyed to a list are the Governor's house and garden, the Dawes Point Battery, Forts Philipp and Macquarie, the arsenal, hospital and prison. The Royal Botanical Garden is shown as well, and the town gate on the route to Parramatta.

On the upper-left-hand corner of the chart is a well-executed coastal view of the entrance to Port Jackson. The lighthouse and South, North and Middle head are marked with letters, keyed to the chart along with their compass headings.

Bougainville's voyage around the world brought him to Sydney in 1825. His visit was a busy one: set up a monument to La Pérouse overlooking Botany Bay, and became acquainted with many of the prominent members of Colonial Sydney society, including John Piper, Samuel Marsden, John Macarthur, and John Blaxland. He became rather more closely acquainted with Blaxland's eldest daughter Harriott, with whom he had a romantic tryst despite her marriage to Calcutta merchant Alexander Macdonald Ritchie.

Hyacinthe Yves Philippe Potentien, baron de Bougainville (December 26, 1781 – October 18, 1846) was a French naval officer. He was the son of Louis-Antoine de Bougainville.[1] He became Rear-Admiral on 1 May 1838. He circumnavigated the world between 1824 and 1826 aboard the ships Thétis and Espérance. In 1825, Hyacinthe de Bougainville led an unsuccessful embassy to Vietnam; that same year, he visited Port Jackson and Sydney where he set up a monument to La Pérouse and erected a grave for le Receveur in Botany Bay. Learn More...