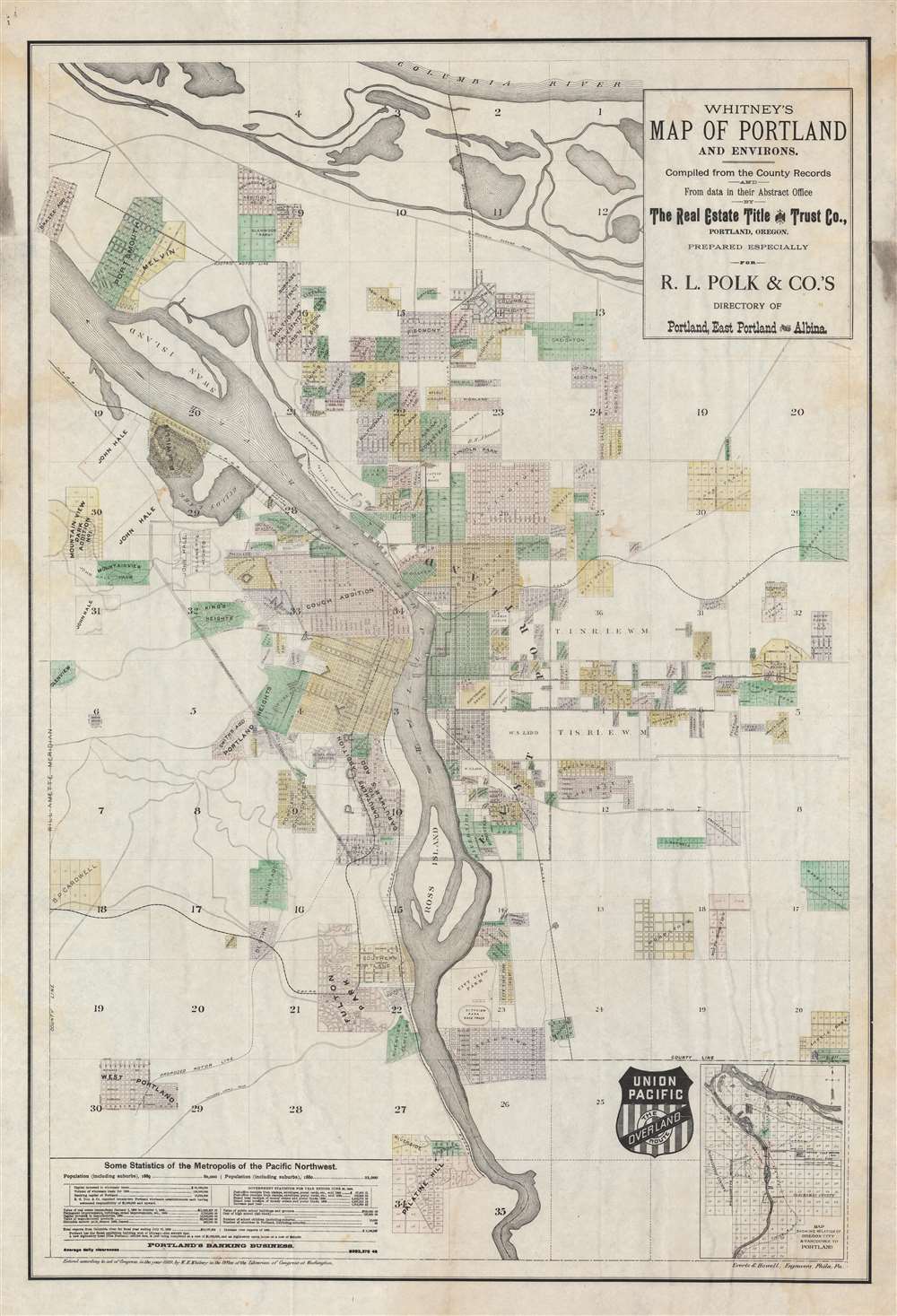 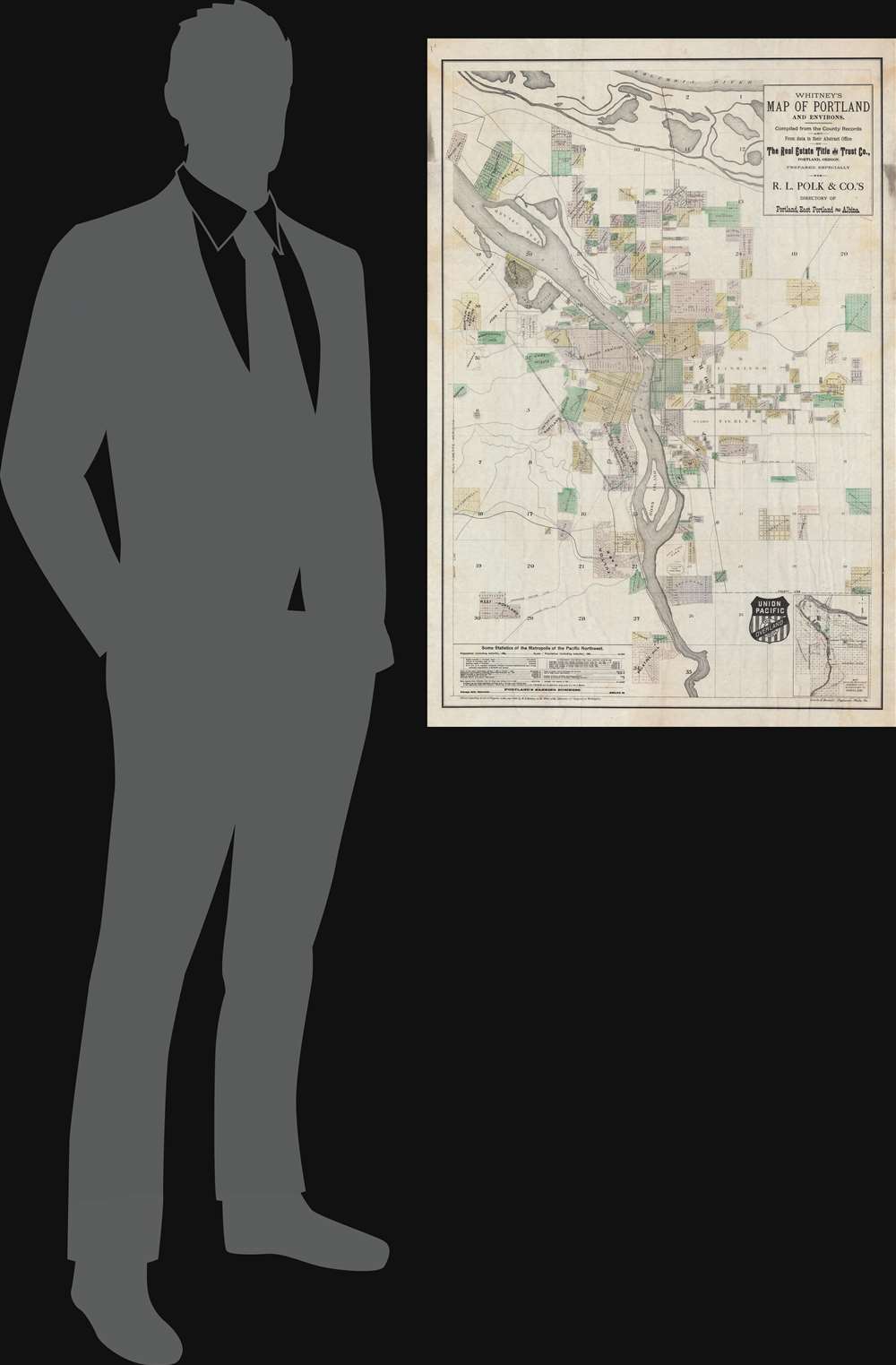 One of the earliest obtainable plans of Portland, Oregon.

A fine example of W. H. Whitney's important 1889 map of Portland, Oregon, one of the earliest obtainable maps of that city. The map is oriented to the north and centered on the Willamette River. It is laid out roughly as a cadastral map, revealing the birth of a city in the form of a patchwork of private development projects and empty land. All streets named, and blocks numbered, for easy real estate capitalization. It also emphasizes the growing transportation networks including (of course) the Northern Pacific Railroad, connecting railroads, projected roadways, and streetcar lines. An inset in the lower right details the greater Portland area, including connections to Vancouver and Oregon City. It is one of a series of important maps of Pacific Northwest cities serviced by the Northern Pacific introduced by W. H. Whitney between 1889 and 1890.

The site of modern-day Portland, Oregon was originally a stopping point for American, Canadian, and British fur trappers active in the Pacific Northwest. Situated on thew west bank of the Willamette River, it was known euphemistically as 'The Clearing', and served as a convenient rest stop on the route between Oregon City and Fort Vancouver. The site had the advantage of being accessible to deep water vessels and near the confluence of the Willamette and Columbia Rivers. The town of Portland was incorporated in 1851 and named after Portland, Maine, the hometown of Francis W. Pettygrove, one of the founders. Initially, Portland had a rough go of it, derided as 'Mudtown' and 'the most filthy city in the Northern States' due to drainage issues causing excessive sewage, mud, and general sludge. Nonetheless, Portland grew rapidly, becoming the major port of the Pacific Northwest by the 1870s. Its growth was spurred exponentially by the completion of the Northern Pacific Railroad in 1883, which finally opened the entire Pacific Northwest to national travel and markets.

Between 1889 and 1890, W. H. Whitney issued a series of separate-issue large-scale pocket maps of western cities serviced by the Union Pacific and Northern Pacific Railroads. These include Salt Lake City, Portland, Seattle, Astoria, Spokane, Port Townsend, Bellingham Bay, and Tacoma. There are potentially others. They are the work of a variety of surveyors, civil engineers, military surveyors, railroad engineers, and local land office, compiled locally then sent to Philadelphia for engraving and printing. Most were engraved by Louis Humphrey Everts, some in partnership with 'Howell', as 'Everts and Howell'. The maps universally bear the distinctive logo of the Union Pacific 'Overland Route', suggesting that the railroad at least partially financed their production. They were further designed to bear local advertising, the present map, for example, promotes 'The Real Estate Title and Trust Company'. Most examples, but not all, have similar advertising, with various examples of the same map promoting different companies. The maps also, universally, bear the copyright of 'W. H. Whitney', filed in Washington D.C. While we cannot be certain, we believe this to be the Boston civil engineer William Henry Whitney, who after 1888, owned a private civil engineering, surveying, and mapmaking firm in Boston. While Whitney did not consider the maps important, they are today one of his most significant legacies. Individually and collectively, they represent some of the earliest obtainable maps of their respective subjects, marking them as important historical records of the urbanization of the Pacific Northwest. Today, all such maps are extremely scarce.

This map was issued in 1889 by W. H. Whitney. It was engraved and printed in Philadelphia by Louis Humphrey Everts and one 'Howell'. The OCLC locates examples at the Huntington Library, Yale, University of Michigan, University of Minnesota, University of Oregon, Oregon Historical Society, and Bingham Young. Exceedingly scarce to the market.

William Henry Whitney (January 3, 1843 - May 4, 1909) was an American civil engineer active in Boston in the second half of the 19th century. Whitney was born in Needham, Massachusetts. He studied at Cambridge High School then at the Lawrence Scientific School of Harvard University. In July of 1862, he enlisted in the Union Army to fight in the American Civil War (1861 - 1865). He served honorably throughout the war, seeing action and suffering wounds twice. He left the service with the rank of Brevet-Major. He served as Alderman of Cambridge. and was involved with the Back Bay development project - producing multiple maps and plans. He began his studies as a civil engineer before the war in the office of Stephen P. Fuller. From 1869 - 1871 he worked in the Boston City Engineer's Office and was involved with the Back Bay development project - producing multiple maps and plans. In 1872, he entered into partnership with J. Franklin Fuller, son of S. P. Fuller. After a short time, Fuller retired and Whitney took full control of the firm, in 1888 renaming it William H. Whitney. As a private contractor he continued to work on the Back Bay. Also around this time, he completed multiple plans for the official records of the Civil War. Between 1889 and 1890, he took a contract with the Union Pacific to produce a series of maps of western cities, including Portland, Salt Lake City, Seattle, Astoria, Port Townsend, Spokane, and more. While he did not consider them an important part of his corpus, they are today arguably his most significant works, being among the earliest obtainable plans of those cities. He was also influential in introducing blueprint technology to American architecture and engineering. Learn More...


Louis Humphrey Everts (April 14, 1836 - January 26, 1924) was an American map and atlas publisher active in the late 18th and early 19th century. Self-described as a "very busy and successful man", Everts was born in East Otto, New York. His family relocated to Geneva Illinois in 1851 where he worked as a clerk. In 1860 he moved to Chicago where he worked in Potter Palmer's dry-goods establishment. Following the outbreak of the America Civil War Everts joined the Union Army accepting a commission as Second Lieutenant in Company D. In 1861 he was promoted to First Lieutenant. During the course of the Civil War Everts saw action at Shiloh and Corinth before becoming an aide-de-camp to General Pleasant Adams Hackleman. He was later promoted again to the rank of Captain serving in the Western Theater and participating in Sherman's March. He ended his military service in 1865 with the rank of Brevet Major. During the war Everts befriend trade cartographer Thomas Hinckley Thompson, also a captain. Planning military strategy revealed the notable dearth of high quality county plans. Seeing a business opportunity the two teamed up as 'Everts and Thompson' (1865 - 1872) and began publishing county maps in Chicago. After the Great Chicago Fire, Everts acquired Thompson's stock and, in his own words "made the business large and profitable until it was necessary for me to visit Philadelphia and establish an office". Everts expanded his production rapidly moving away from standalone maps and refocusing on town histories and county atlases. He worked with numerous partners and seems to have been profitable, investing widely and diversely from land speculation to insurance firms. Apparently he was not the most successful investor and was forced to declare bankruptcy in 1900. Within two years he was back at head of a new firm, the Century Map Company. Active from 1902 to 1912 the Century Map Company published twelve atlases. Everts retired in 1913 and after briefly residing in a home for retired veterans moved to 215 Green Street, Philadelphia, where he lived until his death at 87 years. Learn More...