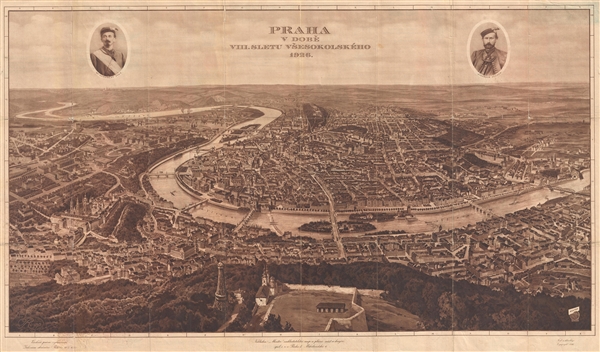 This is a scarce 1926 Joseph Ruep bird's-eye view of Prague (Praha), Czech Republic, intended to commutate the 8th Sokol Rally. The view presents Prague as seen from the high above Petřín Hill looking eastward over the Vltava River towards Můstek. Important locations are numbered corresponding to a faint but readable key on verso. Buildings are identified in considerable detail throughout and most are individually identifiable. The view is based upon a painting by Joseph Ruep (1886-1940).

The Sokol movement (from the Slavic word for falcon) was a youth sport movement and gymnastics organization founded in 1862 by Miroslav Tyrš and Jindřich Fügner, pictured to the left and right of the title, respectively. The Sokol inspired Czech nationalism through regular gymnastic festivals called Slets. The popular movement was abolished several times, in particular under the communist regime, from 1940 – 1989, but was re-established in 1990 and remains active today.

This view was published in Prague by Mentor press, 1926.

Joseph Ruep (April 10, 1886-1940) was a German landscape painter active in the late 19th and early 20th centuries. Ruep was born in Isny and studied art in Kemptan, Bavaria. After his studies, Ruep returned to Isny where he took work with a postcard company. Striking out on his own in 1915, Ruep relocated to Munich where he helped to develop a new style of topographical and relief drawing. He also became known as a master view maker and was frequently contracted to paint bird's-eye perspective views of estates, resorts, cities, and important buildings. Ruep died in Bad Hindelang, Bavaria, Germany.

Good. Some wear and loss on original fold lines. Backed on archival tissue for stability.
Looking for a high-resolution scan of this?