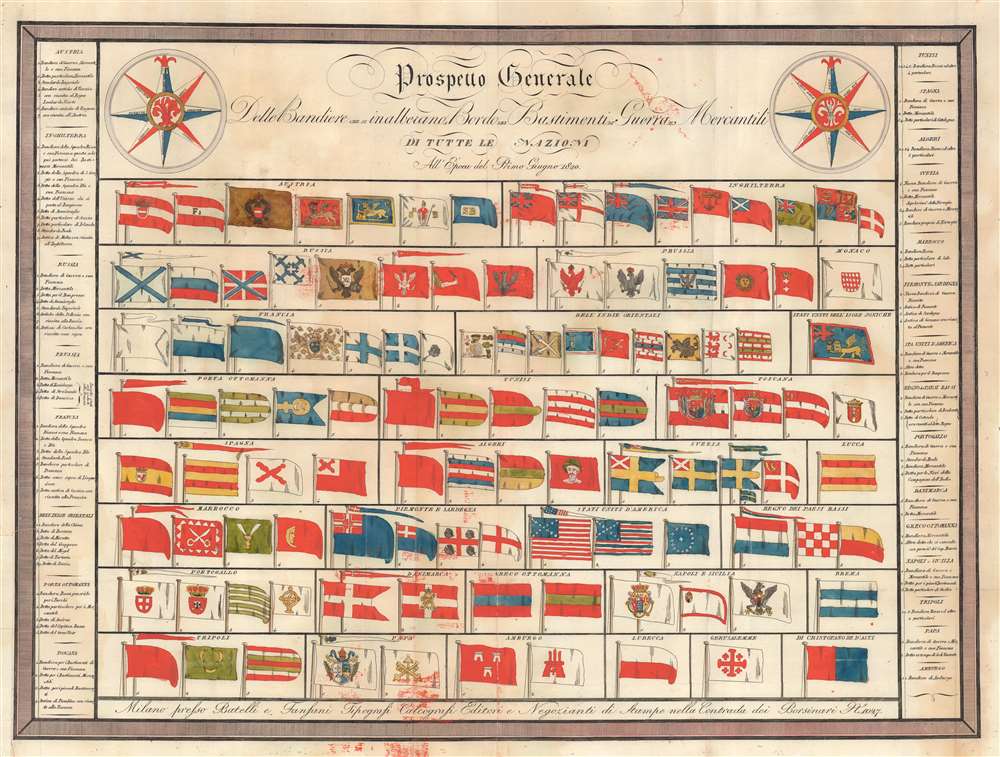 Maritime flags of major powers soon after the Congress of Vienna.
$900.00

This is a rare 1820 Luigi Rossi chart of maritime flags of various major European, Mediterranean, and World powers, including Great Britain, France, Russia, the Ottoman Empire, and the United States of America.

The chart includes over one hundred maritime flags of various nations and kingdoms. Major European powers such as Great Britain, Russia, France, Austria, and Prussia are featured prominently, but the chart also includes the flags of Mediterranean states such as Tunisia, Algeria, Morocco, as well as Asian powers such as China, Japan, and Persia. As the Italian States were not unified at this point, the individual states of Piedmont, Naples, the Papal States, and so on collectively constitute a significant portion of the chart.

This chart is a product of an era of uncertainty, when the international order following the Napoleonic Wars and the Congress of Vienna remained uncertain. The 'Concert of Europe' that emerged was premised on maintaining stability in both domestic and international relations. In reality, while many nationalist and liberal movements were temporarily suppressed, they were at the forefront of European affairs for many decades.

In the case of Italy, the fifty-year long process of unification known as the Risorgimento started to gain steam around the time this chart was produced, with failed revolutions in both southern and northern Italy in 1820 - 1821.

One benefit of the relative stability of the 19th century was increased trade, facilitated by treaties as well as the reforms undertaken during Napoleon's rule. Improvements in naval technology, the increasing naval dominance of the British Empire, the emergence of its former colony in the United States as a naval power, and early manifestations of the philosophy of free trade (as opposed to mercantilism) all aided the increase of maritime trade over this period.

This chart was part of Rossi's Nuovo Atlante di Geografia universale, compilazione ridotta ad uso degl'Italiani, riveduta ed ampliata, published by Batelli e Fanfani in Milan in 1820. The atlas itself is held by a handful of institutions in Europe and North America and in at least two instances the chart is cataloged separately by galleries and library special collections. It is scarce to the market.

Luigi Rossi (fl. c. 1819 - 1821), not to be confused with the earlier composer or later painter, parliamentarian, or filmmaker of the same name, was an Italian cartographer and scholar best known for his 1820 Nuovo Atlante di Geografia universale. He also translated into Italian the epic poem Posthomerica by the Greek poet Quintus Smyrnaeus. Despite his noble title as 'Cavaliere,' he does not appear to be the same person as his contemporary, Count Pellegrino Luigi Rossi, who was an economist and high-level government official in France and the Papal States. Learn More...