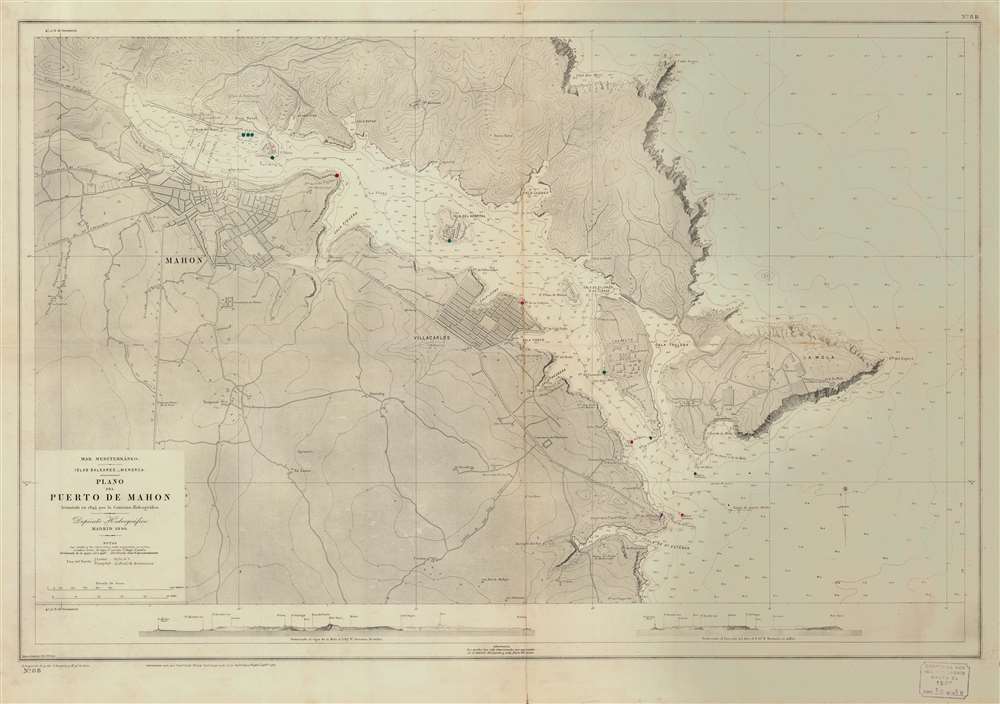 A detailed chart of the environs of the capital of Menorca!
$250.00

This is a 1956 Depósito Hidrográfico nautical chart or maritime map of Mahon Port on Menorca in the Balearic Islands. Depicting from just west of Mahon (the capital of Menorca) to the Mediterranean Sea and from Cabo Negra to the Cala de San Esteban, the map presents the region's navigational situation. The coastlines are illustrated with fantastic attention to detail, and depth soundings (given in meters) allow mariners a complete understanding of navigational hazards. Manuscript red and green circles mark lights and beacons. Both Mahon and Villacarlos are detailed as well, although no streets are labeled. The military hospital on Hospital Island, the Mahon and Villacarlos cemeteries, and the ruins of the Malborough Fort are also identified. Profile views of the region from the northwest and the southwest are situated just above the bottom border.

This chart was originally published by the Depósito Hidrográfico in 1896. Several subsequent editions, with corrections, were published during the first half of the twentieth century, and the present edition was printed in 1954. A stamp in the lower right corner attests that this chart has been corrected to be current as of December 15, 1956. No editions of this map are cataloged in OCLC, and a few incomplete entries appear in other online locations. We have been unable to locate any other examples of the printed 1954 edition or one bearing the manuscript corrections to 1956.

Good. Exhibits some wear along original fold lines. Manuscript corrections to 1956.
Looking for a high-resolution scan of this?