1912 Pocket Map of Pyongyang and Nampo under Japanese Colonial Rule 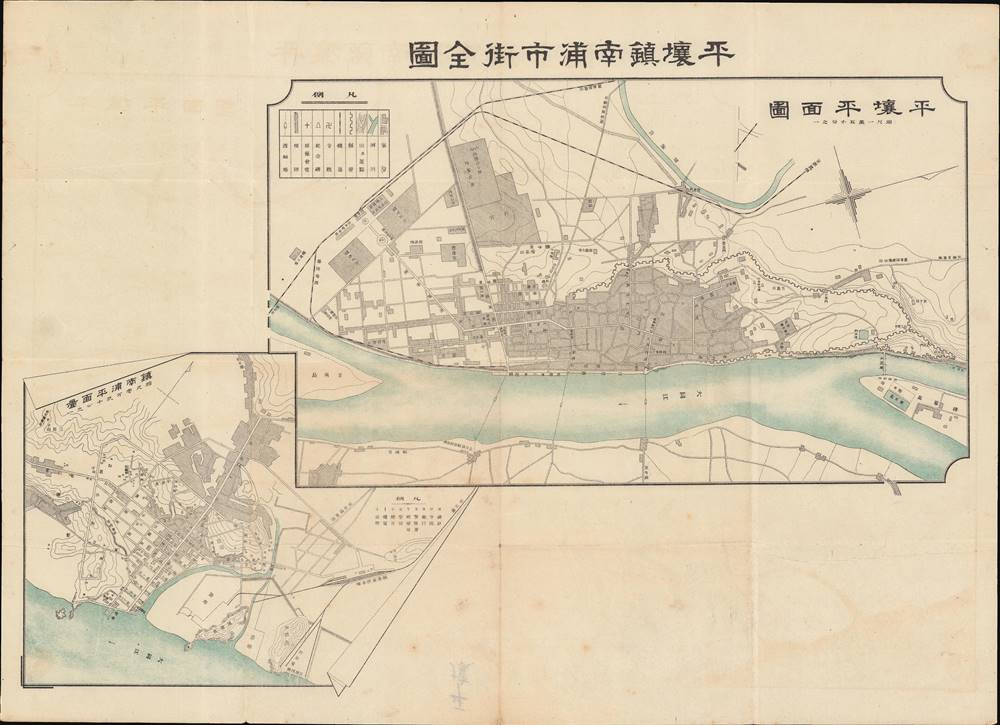 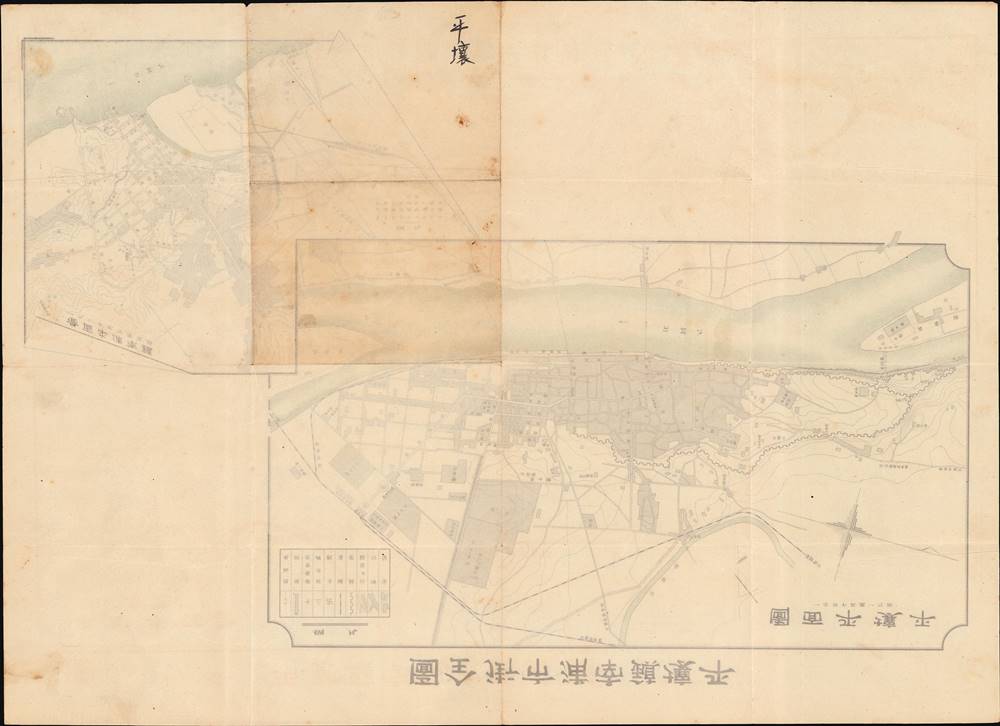 1912 Pocket Map of Pyongyang and Nampo under Japanese Colonial Rule

The early days of Japanese colonialism in Korea.
$350.00

This is a rare c. 1912 pocket map of the cities of Pyongyang (Heijō) and Nampo (Chinnanpo), Korea, issued soon the Japanese annexation. It reflects the nature of the Japanese colonial period, characterized by rapid economic development (primarily meant to benefit the home islands) coupled with harsh repression. The relatively small size and foldability of this map suggests it was meant for on-the-go use, and likely intended for Japanese settlers or travelers.

The Architecture of Colonialism

Many of the buildings labeled relate to Japanese colonialism: military garrisons, Kenpeitai (secret military police) offices, banks, train stations, customs houses, police stations, courts, prisons, and post offices. In Pyongyang, most of these structures lie to the south (left) and west (top) of the old Joseon-era walled city. The heavy presence of police and military forces, along with industrialization and the 'rational' layout of the newly built sections of the city, reveal the main effects of Japanese colonialism on Korean society. These effects are less obvious on the Nampo map, as almost the entire city had only been built in the previous twenty years or so under Japanese auspices.

The larger map at top is of Heijō (sometimes also written 平城), now Pyongyang. It is oriented towards the West, with north at right, and has a scale of 1:15000. The brief legend indicates symbols for geographic features, populated areas, religious sites, dikes, ferry stations, and the old city walls. The presence of Christian churches (耶穌會堂) is an echo of the intense and successful activity of mostly American Protestant missionaries in Korea at the turn of the twentieth century. Pyongyang in particular was a successful mission field and came to be known as 'the Jerusalem of the East'; among the faithful was Kang Pan-sŏk (강반석), the mother of the future dictator of North Korea, Kim Il-Sung and the subject of a posthumous cult of personality ancillary to that of her son.

Speaking of the Kim dynasty, to the north (right) of the urban center is Mansudae, a hill overlooking the city that now is home to a group of Socialist Realist buildings and monuments, including massive bronze statues of Kim Il-Sung and Kim Jong-Il.

The city seen here was heavily damaged during the Korean War, not least because of sustained and extensive American bombing, which demolished some three-quarters of the buildings in Pyongyang. For example, Pyongyang Station (鐵道宮舍) at left was originally completed in 1906 as a wooden structure, rebuilt with stone in the 1920s, destroyed during the Korean War, and rebuilt in a Soviet style in the 1950s.

The smaller map to the left is of Nampo, known as Chinnanpo under Japanese rule; it is oriented towards the northwest with a scale of 1:12000. Nampo was less-heavily policed than Pyongyang, probably because the Japanese population was much higher, proportionally. Nampo was built up as a port for Pyongyang soon after First Sino-Japanese War and rapidly developed afterwards, both a product of and catalyst for Japanese imperial aims in Korea.

The addition of the 鎭 character (meaning, in this case, suppress or subdue) was in reference to the Japanese landing at Nampo during the First Sino-Japanese War. It was seen by Koreans as a colonial insult and was changed immediately after Korea was liberated in 1945. Like Pyongyang, Nampo suffered heavy bombing by the U.S. Air Force and over three-quarters of the structures in the city were destroyed.

This map dates from the early days of 'colonial modernity' in Korea. Although Japanese influence in Korea had been increasing since the 1870s, it became much more pronounced after the First Sino-Japanese War and more so again after the Russo-Japanese War, when Japan established de facto rule over Korea. In 1910, Korea was annexed outright by Japan.

Japan's colonial venture in Korea included compulsory public education in Japanese, sanitation and public health, infrastructure, urban planning, changes in manners and mores, and economic development, which primarily benefitted Japanese conglomerates (zaibatsu) and their investors, as well as a small coterie of elite Koreans. These policies were aimed at assimilating Koreans and Korea into Japan's empire, and were coupled with extremely brutal repression of independence activists and insurgents.

This map contains no publication information. It is only held by the University of California Berkeley and is very scarce to the market. The edition held by UC-Berkeley is dated to 'after 1868,' but lists publication information not available on this edition, with the maker and printer as Kunimitsu Michitarō (國光道太郎) of the Heijō Shinbunsha (平壤新聞社). In terms of determining a date, the presence of a rail station in Nampo means that the map must be from after 1910. At the same time, it does not include the Shinto Shrine in Pyongyang located at Moranbong (Ch. 牡丹台, Kr. 모란봉, at right, just north of the Taedong River 大同江 where the old city wall ends) that was completed in 1916, so the map likely dates from before then. The Shinto Shrine at left in the Nampo map labeled 'Konpira' (金比羅) was likely a predecessor to the Chinnanpo Shrine that was primarily constructed in 1912 and formally established in 1918. Taken together, these features suggest a date in the early 1910s, just after Korea's formal annexation by Japan.

Heijō Shinbunsha (平壤新聞社; fl. c. 1909 – 1912) was a news agency based in Pyongyang (Heijō) in the Japanese colonial era. Following the Gabo Reforms in 1894 and increasing Japanese immigration to and influence over Korea, many newspapers were founded in quick succession. Many of these folded or were merged into larger companies within a few years, including Heijō Shinbunsha, which merged with the Heijō Nichi Nichi Shimbun (平壤日日新聞) and Heijō Nippō (平壤日報) in 1912. Learn More...

Good. Original fold lines visible. Some foxing and staining, mostly on the verso.