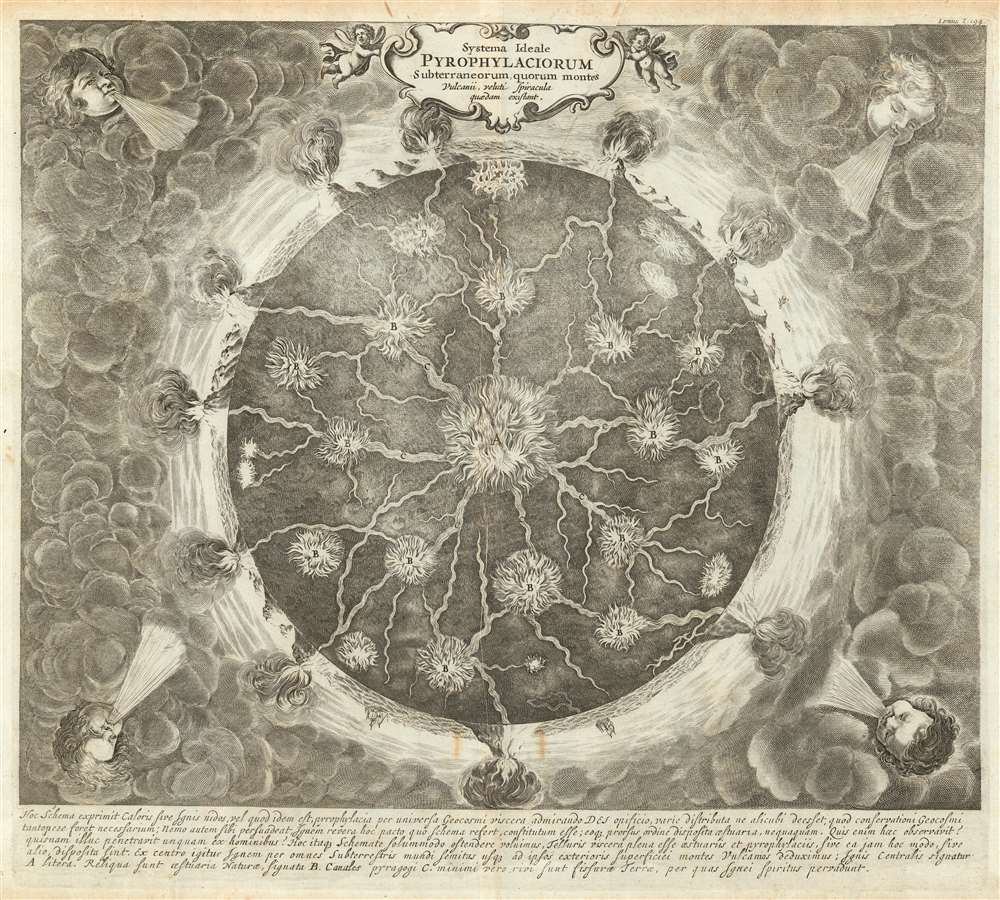 This is one of the 17th century polymath Athanasius Kircher's most iconic and graphically intense maps. The map illustrates the interior of the Earth postulates cohesive global volcanic system tied to a fiery core. Situated amidst dense clouds with Aeolus, or wind heads, at the corners, the Earth appears as a gigantic fiery orb. Along the circumference, we can recognize the oceans, mountains, land, and even a few sailing ships. The center of the Earth is a great fire. Beyond the flaming core, artery-like networks of subterranean channels direct the heat of the core to volcanoes on the Earth's surface.

Inspired by two weeks of earthquakes in Calabria in 1638, and the volcanic eruption of Vesuvius in 1637, Kircher postulated two interacting systems, a volcanic system, as seen here, and a hydrosystem of underground seas and rivers. Kircher hypothesized that the volcanic system was centered in the core of the Earth, but connected via networks of tunnels and certain subterranean focal points, to the surface. The volcanic system interacted with the hydrosystem by superheating parts of it, causing the movement of water to and from the surface – hence ocean currents, earthquakes, tides, and more.

Kircher's ideas may seem quaint to us today, but he was an excellent observer and a great reasoner. His work with currents in particular is revolutionary and among the first serious scientific studies of this phenomenon. He was also correct in surmising the superheated nature of the Earth's core. While his network of underground lakes and rivers connecting to giant reservoirs under mountain rangers was incorrect, his theory did correctly recognize that Earthquakes were caused by the movement of great plates of Earth. And, while his assessment regarding the source of ocean currents was incorrect, his identification of current patters was often accurate.